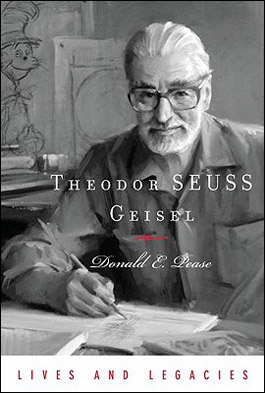 There are biographies, and then there are psychological biographies. The fallacies and hazards of the psychobiography form are easy to name, but the form can produce miracles when used well. Donald E. Pease’s Theodor Seuss Geisel, a brief, spirited new study of the life and work of the great Dr. Seuss, provides a satisfying and surprising look at the motivations and half-hidden meanings behind classic children’s books like Cat in the Hat, Green Eggs and Ham and How The Grinch Stole Christmas.

The biographer brings out the heavy psychological equipment to analyze the first Dr. Seuss children’s book, And To Think That I Saw It On Mulberry Street, published in 1937 when the author was 33 years old. The book depicts a child with a vivid imagination facing off against a stern father who rejects his son’s artistic spirit. Pease argues convincingly that young Theodor Seuss Geisel’s moral battle with his strict father shaped everything about his work, and that it was the very intensity of this father-son battle that gave the early Dr. Seuss books their power and energy.

Young Theodor Seuss Geisel preferred his gentle mother (who also provided him with the family name “Seuss”) to his domineering father. He left the family hometown of Springfield, Massachusetts (where the Seuss and Geisel families were deeply entrenched in a German-American community) for Dartmouth College in New Hampshire, where he quickly fell in with the campus comedians running a plucky college humor magazine called Jack-O-Lantern. It must have been a golden age for satire at the Ivy League colleges:

In the 1920s the Jack-O-Lantern was sold in newsstands in New York and Boston. Its chief competitors included the Harvard Lampoon, where Robert Benchley and Robert Sherwood were featured writers; the Yale Record, to which Cole Porter regularly contributed; the Columbia Jester, whose staff included Bennett Cerf; and the Brown Jug, which had S. J. Perelman.

Geisel found his identity here. He began signing cartoons as “Seuss” after being barred from contributing to the humor magazine following an incident with some bootleg gin, and kept the name during his early years as a popular cartoonist and magazine/advertising illustrator. He followed politics intensely, and appeared to feel the heavy weight of his German ancestry while observing the rise of Hitler and the looming threat of a return to global war in the 1930s. He began publishing bitterly angry anti-Nazi and anti-Japanese cartoons. His outspokenness against Hitler certainly placed him on the good side of history, though Pease’s biography indicates that a strong sense of ethnic self-hatred (which must have intersected with hatred of his Germanic father) pervaded his liberal political sensibility.

Dr. Seuss’s books were always moral and quasi-political exercises — he knew exactly what he was preaching in the early and wonderful Horton Hears A Who, in the anti-materialistic Grinch Who Stole Christmas and in the anarchic Cat in the Hat, which finally gave the author a gigantic hit when it was published in 1957 (according to Pease’s persuasive account, this hatted cat symbolizes the power of reading itself). Later works like The Sneetches (which parodied social anti-semitism) and the pacifistic Butter Battle Book continued this trend, though Seuss never managed to write a book to address the private anguish he went through when his once-happy marriage floundered in middle age (Seuss fell in love with another woman, causing his wife to commit suicide).

After reading this book, I reopened every Dr. Seuss book I could find, enjoying them anew. This biography may not be for every reader, because some may not care for analytic equations like these:

Children’s ability to reimagine the rules by which people live convinced Geisel that writing children’s books might transform the cognitive structures behind political parties and social formations. He began to think of childhood as a quasi-utopian space in which belief in peace, social equality, and democratic participation could be reanimated.

The biographer might possibly be shoveling some deep oobleck our way here, but I don’t think so. The evidence for his conclusions is usually strong, and I doubt that a better explanation of the strange career of Dr. Seuss can be found. A good psychological biography of a literary figure can amount to a reconsideration of an entire body of work. That’s what author Donald Pease manages to pull off with this enjoyable and informative study.