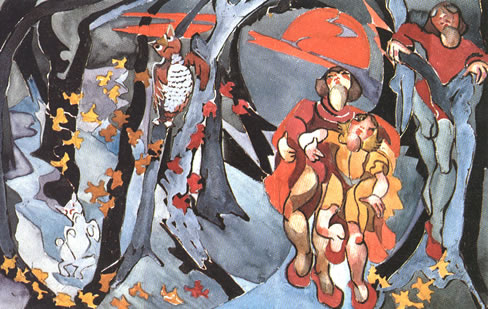 1. This rather remarkable painting, titled Hansel and Gretel, was painted by Zelda Fitzgerald in 1947.

2. Speaking of difficult literary ex-wives: earlier this year I wrote an article about T. S. Eliot’s Possum’s Book of Practical Cats and the Broadway show Cats in which I suggested that the authors must have invented the character of Grizabella to represent Vivienne Eliot, the great poet and critic’s first wife, whose life ended in a quiet mental institution. A strongly-worded comment has been posted to my blog article by an anonymous person who appears to be familiar with the T. S. Eliot estate. This person agrees with my conjecture about Grizabella, and points out that a controversy remains over the Eliot estate’s attitude towards Vivienne Eliot’s legacy. If you’re interested in this topic, please read the long comment by “Coerulescent” and judge for yourself.

3. The Moth, an excellent literary storytelling revue, wanted to hear stories about “transformations”. I don’t think they could have chosen a much better participant for this challenge than Laura Albert, who delivered a moving piece about becoming and unbecoming J. T. Leroy, and about the ridiculous hassles that followed her “exposure”. I’m proud to say I stood by Laura even when few others did. Congrats to Laura for finding her way back as a writer; watch the video!

4. It looks like Sander Hicks’s new political testament Slingshot to the Juggernaut will be published by the currently shape-shifting Soft Skull Books, which is highly appropriate since Sander created Soft Skull. Nice move, and I’m looking forward to the book.

6. The University of Chicago is e-publishing Anthony Powell’s A Dance to the Music of Time, an apparently epic multi-volume work I haven’t yet read but hear amazing things about. They’re giving the first of the 12 books away free during the month of December.

9. Chapter 16: A Community of Tennessee Readers, Writers and Passersby.

13. Illuminating visualization of Red and Blue voting trends in the United States of America for the last 88 years. (Though we didn’t start using “Red” and “Blue” until recently, apparently the regionalization of political ideology is nothing new).

14. Literary critic James Wood on the wonder of Keith Moon. “Moon is the drummer of enjambment.” Apt.