On Zazen: A Talk With Vanessa Veselka 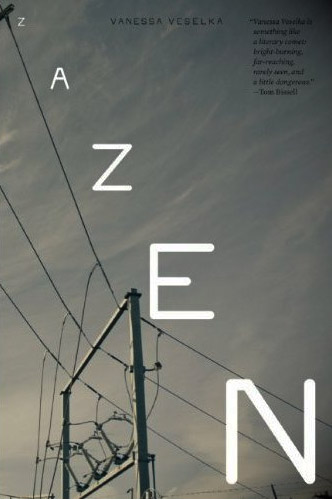 by Vanessa Veselka is an amazing novel, easily one of the most exciting books of the year.

The story is narrated by Della, a recent college graduate with a degree in paleontology, who kills time learning yoga and working in a vegan restaurant while her country, a slightly twisted mirror reflection of today’s United States of America, slips into chaos amidst the failures of War A and War B. Della lives with her brother Credence, with whom she shares the disconcerting memories of extreme hippie parenting, and wanders her city (which resembles Portland, Oregon) wrestling with her anxiety, imagining acts of violence and developing desperate crushes on anyone who reaches out to her with a kind word. She’s a wry, sarcastic narrator and a troublemaker, and the best thing about Zazen is the chance to see the world through this funny, brainy character’s eyes.

As a bittersweet snapshot of a deeply confused alternative hipster counterculture, Zazen is reminiscent of Justin Taylor’s The Gospel of Anarchy, another recent book I liked. But Gospel of Anarchy is about post-collegiate anarchists and punks, while Zazen is about post-collegiate anarchists and vegans, and Zazen is about ten times more manic. The comic prose recalls Matthew Sharpe’s Jamestown, while the book’s sense of traumatic disorientation and social disconnectedness calls to mind Tom McCarthy’s Remainder. With all that said, Zazen is like nothing but itself — a simply original story, emotionally resonant and crammed with nuggets of delightful observation.

This novel is one of the kickoff publications from a new publishing house, Richard Nash’s innovative Red Lemonade, which invites you to read the entire novel online. But you may want to buy a copy of this book, or give one to an anarchist/vegan friend. I was very happy to have had a chance to ask Vanessa Veselka some questions about her brilliant work. Here’s the conversation we had.

Vanessa: I wrote a short story called Zazen in fall of 2006, which appeared in Tin House. I didn’t get serious about the novel until 2007. From then it took me three and a half years writing 20 hours a week, roughly. There were some breaks. I am of two minds about whether it changed over that time. An enormous amount of the first draft text is in there though. I would say over half went in verbatim.

Going back to your other questions, what is this book? Hmm … another Buddhist geological thriller? A secular spiritual epic? You know, just the other day in a radio interview I actually failed to describe my own book. It was a low point. But I’ve actually thought a lot about ‘what’ Zazen is. One day I was listening to an English professor talk about encyclopedic fiction. He defined it as a work that attempts to encapsulate an entire culture. I immediately realized that’s what I was trying to do. It’s not Ulysses or Tristam Shandy or Moby Dick, but the project is the same. Put it all in, try to say it all. It’s exactly what we are taught to fear as writers. Don’t be pretentious. Don’t try to say anything. Why? Because someone might think you are trying to say something and trying is so uncool? It’s a juvenile stance and it’s all over modern literary culture. Soapbox aside, Zazen has so many angles because it’s built on Della’s voice and Della’s voice arises out of conflict. She’s a radical thinker (radical as in radix/ from the root, not as in social extremism) and so sees all things as connected. I feel like I’m answering this poorly … but it is funny (now) that you find Zazen’s multiple personality disorder charming because it was largely to blame for why it got turned down everywhere I sent it. People wanted one part and not the rest. Some major element or another was always getting dismissed. And what can you do with that? You either gut the fish or let it swim away. Or, in the immortal words of Dr. Frankenfurter from Rocky Horror Picture Show, “I didn’t make him for you!” Speaking of orgies … more on that later.

Levi: Near the end of this tour de force, the heroine of the novel talks to a kid in a Misfits shirt outside a convenience shop and tells him “Everything’s on fire. The guy who won’t sell you the beer, your dad, the Ravage all around us, your feelings about the music you like, it’s all on fire.” Is this your own philosophy of life? If so, does any of this come from your background in earth science, or from Heraclitus, or what?

Vanessa: It’s not Heraclitus, but it fits right in with him. It’s the Fire Sermon from the Pali Canon. Supposedly it’s the third discourse the Buddha gave after being enlightenment:

It’s from the oldest known Buddhist writings and I named that chapter the Skateboard Sutta. It’s a turning point for Della that is easily missed, I think, between the bombs and the sex. That section meant a whole lot to me though. It never changed from the day I first wrote it because I was trying to say something I had no way of saying. It was as close as I could get.

Levi: The same character is obsessed, for apparently tragic reasons, with self-immolation, and keeps records of historic incidents of protesters setting themselves on fire in Vietnam, Prague, Spain, Germany, Taiwan. The title of the book, which refers to the Zen practice of sitting still, seems to present a rather horrifying twist on this image (especially since the characters discuss whether or not it’s possible to sit still after setting yourself on fire). Meanwhile, the so-called “Arab spring”, the wave of popular uprisings in Egypt, Libya, Jordan and Syria that is still going on, began when a man named Mohsen Bouterfif set himself on fire to protest living conditions in Algeria. Did this coincidence strike you as strange? And do you have hope for the “Arab spring”?

Vanessa: Since I wrote Zazen two or three things have happened, which were in the book. One day I saw a New York Times front page with a pastor praying and holding up car keys and a huge SUV on the dais behind him while a black woman walked up the altar steps toward him. That scene is in my book. I never thought I would see it in the papers. But there it was. It was during the early days of the financial meltdown and the photograph was of a Detroit pastor praying for the auto industry. The following year Wal-Mart had a big sale and people were there so early and got so impatient that they tore the doors off the front and stampeded in to shop. They trampled a woman 8 months pregnant on the way. That scene, too, felt familiar and the immolations as well. I take those things to mean that, in general, I am getting close to a cultural pulse.

Immolations, however, fascinate and terrify me. They are sheer and beautiful and horrifying and desperate and effective and meaningless and symbolic all at the same time. I can’t figure out how I feel it. It’s their symbolic nature I fear and feel the most. On the one hand a man on fire can light a world, and give focus to a million injustices. It can make the moment NOW. But when people are symbols, killing people is fighting a system, symbolically. Yet somehow the system seems to outlive these symbolic battles. Killing a guy in a suit and a tie, for instance, doesn’t stop transnational capitalism but it’s a fine symbol of its demise. But it is not its real demise. The Arab Spring, like the Prague Spring before it began with immolation. I, like many people, cherish the hope that it will bring self-determination to the Arab world. But to me, immolation is more Promethean. It is a burning doorway. Ultimately, I want to believe in a world where we are worth more to each other alive than dead.

Levi: A Literary Kicks interview is always five questions, and the fifth one is always the same, but I’ve got two more questions, both fairly stupid ones, so I hope you don’t mind me running them together. First, are there really massive group sex parties in the cities of the Pacific Northwest? Second, are you aware that your last name is the name of an East Village coffeeshop that used to be Allen Ginsberg’s favorite, and does this signify anything?

Vanessa: I grew up in Greenwich Village and I love Veselka’s. I’m pro-pierogi in general. Where potatoes and dumplings are concerned, I’m easy. As far as sex parties go … yes.

Okay. I’ll be more specific. There are sex parties in the Pacific Northwest. Some have been large. Though I like to think none of them are better organized than mine. I actually have a friend who wanted to throw the sex party from the book for real. I think she thought of it as a wonderful new way to promote a book. Inside the box. But really when you get down to it, if you’re going to throw a sex party, no one needs to talk about books, right? The bracelet system from my party was pretty ingenious though. I hope some enterprising party planner uses it. And sends pictures.

Levi: Finally, the question I like to always ask last: who are the writers who’ve inspired you the most, either with regard to this book or in general, and why?

Vanessa: I heart Dostoyevsky forever. Raskolnikov was maybe my first love. And more recently I have been fascinated by W. G. Sebald. But I can find no similarities between my writing and either of theirs. I think Dostoyevsky’s sense of humor molded mine. People forget how funny he is. Like Kafka, hilarious. They both knew it, too. Sebald? Not so funny. Nope. But he writes like the sound of a temple bell.