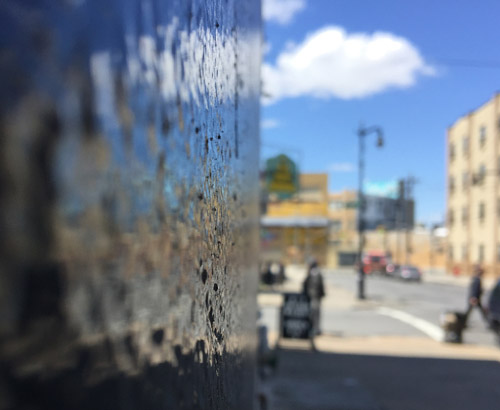 A few weeks ago I showed up for a cool poetry reading at a dive called Gunther’s in Northport, Long Island, a bar famous for being Jack Kerouac’s favorite drinking spot when he’d lived nearby. This reading was significant to me because something was happening for the first time. When I was called to the mic, I was introduced as Marc Eliot Stein.

Marc Eliot Stein? Who the hell is that? It still jars me, three months after announcing my decision to dispose of the pseudonym I had used for over 20 years, to remember what name I’m going by these days. I had been performing spoken word poetry as Levi Asher for over 20 years by now, so I felt a bizarre disassociation as I began to perform. What does Marc Stein know about poetry?

Well, the reading turned out fine: I found my voice inside Gunther’s welcoming walls, and by the time I stepped down from the mic I felt like Marc Eliot Stein had made his debut.

And now in two weeks …

Here I am again, now appearing at an extremely exciting event. The Left Forum has been holding annual gatherings in New York City since Ronald Reagan was President, and this year’s event has an absolutely amazing lineup including Amy Goodman of Democracy Now, Medea Benjamin of Code Pink, and one of my favorite living political philosophers, Slavoj Zizek. So I’m very psyched to be doing a panel discussion at this event, and I plan to hang around all three days and soak in the good spirit. Come by if you can! As befits a leftist forum, the prices are reasonable.

The panel I’m appearing on is about meditation, religion and political activism. This idea was the brainchild of my friend Sander Hicks, a dedicated leftist and the original founder of Soft Skull and Vox Pop. I’m proud to have suggested the title phrase “Inner Truth to Power” (obviously a play on “truth to power” as well as a George Harrison reference) which brilliantly came to me during an email jam session with the two other panelists, Robert “Rafiq” Lewis (author of Days of Shock, Days of Wonder) and Gregg Hill, one of the original founders of Occupy Wall Street. It’ll all be going down on Saturday morning May 21 at 10 am at Pace University in New York City.

Phases of Change. It’s not only my name but also my website affiliation that looks different when I look at the description of this May 21 event. In the past year I’ve thrown myself into the task of launching a nonprofit organization called Pacifism for the 21st Century and a website called Pacifism21.org. This has been an earth-shaking process of discovery for me, as well as a whole lot of hard work … and it’s starting to come together. I’ve launched a new “blog” on the website to help me work through my thought process about this venture. It’s called Peaceful Thoughts and here’s a recent post I like a lot. (Don’t worry, I”m still writing blog posts on Litkicks too.)

Inner truth. We seem to be living in seismic times. Sometimes I sense very good changes in the air: peaceful overtures between the USA and Cuba, and the USA and Iran … a more outspoken and defiant populace … a greater sensitivity towards diversity in gender and lifestyle. Sometimes it seems like we’re all getting smarter.

But just when some things go well, we sometimes feel dystopian breezes in the air. Like, for instance, the apparent new popularity of Donald Trump, who I’ve been theorizing about on Pacifism21. As spring slips into summer 2016, there appear to be cataclysmic omens in the air. Inner truth. Phases of change. We’re going to have an actual moment of meditation during our Left Forum panel on Saturday May 21. Wherever you’ll be at that moment, and whatever changes you are dealing with in your own life right now, you may want to take a deep breath too.