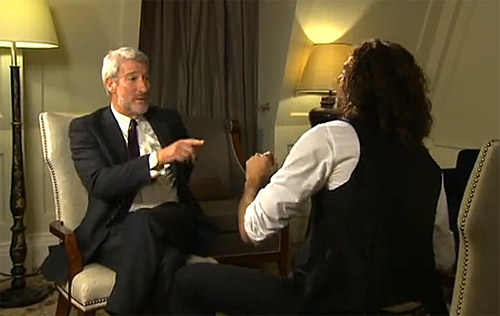 The pointing finger in this photo belongs to Jeremy Paxman, a British journalist. The pointee is Russell Brand, a brash and popular comedian who has guest-edited a new “Revolution” issue of the New Statesman, in which he says things like this:

Apathy is a rational reaction to a system that no longer represents, hears or addresses the vast majority of people … Along with the absolute, all-encompassing total corruption of our political agencies by big business, this apathy is the biggest obstacle to change.

I don’t vote because to me it seems like a tacit act of compliance … Total revolution of consciousness and our entire social, political and economic system is what interests me, but that’s not on the ballot. Is utopian revolution possible? The freethinking social architect Buckminster Fuller said humanity now faces a choice: oblivion or utopia. We’re inertly ambling towards oblivion, is utopia really an option?

This BBC interview got a ton of press, both from outlets that thought Russell Brand preached the truth and others that found him ridicuous. Brand is not a comedian I usually pay attention to, but the publicity attracted me and I watched the whole 8 and a half-minute interview.

I am pretty impressed. I agree with virtually every single thing Russell Brand said, and I think he handles the interrogation of a professional tough-guy interviewer extremely well.

The standoff between Jeremy Paxman and Russell Brand is a case study in rhetoric. They take opposite strategies: Paxman attempts to befuddle Brand into incoherence, and Brand attempts to disarm Paxman into friendly acceptance. In fact, this reflects the opposite sides of the great cosmic political argument they are acting out: Paxman’s hostile questions demonstrate the harsh edge of pessimistic realism, while Brand’s amusing banter demonstrates the gentle power of optimistic generosity. I suppose it’s because I prefer the latter that I think Brand walks away with the prize.

I bet Jeremy Paxman thinks he won this debate — in fact, I bet he thinks it was barely a competition. “You’re a very trivial man”, he tells Russell Brand. I may have thought Russell Brand was trivial before I saw this interview, but I don’t think he’s trivial now.

One of the first hazards that any idealistic political activist faces is laughter. It’s easy to embarrass a person who is expressing a sense of spiritual connectedness with the world and a general hope for humanity — and yet it’s essential for our public voices to remind us that we all are spiritually connected (whether we like to admit it or not) and that we do have a reasonable hope for a better and fairer world, a world that avoids war and vast economic injustice, a world that finds a way to sustain a healthy and natural environment.

“You’re a very trivial man”, Paxman says to Russell Brand. I think we need a few more clowns like him.