Do we search out the bottom, those of us who eventually find ourselves hitting it? I think we must. But I’d had enough of trouble and poverty by the summer of 2003. And I didn’t know anymore how to get back to where I once had been.

Things might have gotten still worse for me, but fortunately they got better. I didn’t expect to ever hear from Dave Hendriks again after he told me his school was going out of business, taking $2000 of my back pay with it, but to my surprise he called a few weeks later, not to tell me I would ever get paid (I wouldn’t), but to tell me that a school called New Horizons was taking over the Hendriks enrollment. Dave had recommended me to the owner as one of his best teachers, and the school wanted to interview me.

I visited the New Horizons campus in Commack, Long Island and was happy to find a professional operation, equipment that mostly worked, classrooms at least half full. The only problem was, they wanted me to teach Microsoft .NET. I was a lifelong Microsoft-hater, and I didn’t know anything about the .NET platform. “Can you learn fast?” owner Stuart Tenzer asked me. Yeah, I could.

Microsoft .NET turned out to be not a bad platform at all. In some ways, I had to admit, it was even better than Java. Good software from Microsoft … this really was a new millennium.

Around the time I began teaching for New Horizons I got a call from Ken Jordan. I hadn’t heard from him since the farewell scene at ArtAndCulture.com, the company I worked for that went out of business before I worked for Hendriks and Hendriks went out of business. “Are you available for a gig?” he asked. His friend Alane Mason, a senior editor for a major publishing firm, had gotten a grant to create a website devoted to international literature in translation.

I had a brief phone chat with Alane, who asked me to call her partner “Dee Dee Felman”. I was excited to talk to a person with the same first name as the great bass guitarist Dee Dee Ramone of the Ramones, though after I called I discovered she was actually Dedi Felman, also an editor at a major publishing firm.

Dedi told me about the website her organization wanted to build: it would be called “Interlit”, and it would be hosted at Bard College. They would publish a themed issue of about 30 pieces each month, and they also wanted a searchable archive cross-referenced into categories like country, region, time period, genre and environment.

The site would have to be built in PHP, because the Bard web servers were not configured for Java. This left me pretty much unqualified to take the job, since I’d never seen a line of PHP in my life. But I wanted the contract, so I decided not to emphasize the fact that I didn’t know PHP to Dedi. If I could learn .NET quick, I could learn PHP quick. I worked up a proposal and a price estimate and got the job.

Now I was teaching and coding (and learning new stuff, fast). The Internet industry was waking back up in the summer of 2003, as if we’d finally managed to shake off the lingering taint of the dot-com stock mess and remembered what was so exciting about this new technology in the first place.

A new Internet ecosystem was slowly coming into being, now more social, more grassroots, and (thank god) more minimalist. Google’s nearly blank front page set the design standard for the new age: the blinking screaming text and crowded graphics of sites like Pathfinder and ESPN and Go.com was replaced by the spare, calm, pastel-colored aesthetic of “social networks” with names like Xanga, Wikipedia, Blogger, TypePad, Friendster, MySpace (which didn’t have a calm pastel-colored aesthetic, but only because the users were able to upload their own HTML), SixApart, Facebook, LinkedIn, Flickr, Etsy.

The biggest difference between these new sites and the old dinosaur sites of the first Internet wave was their funding structure. The “get rich quick” hysteria had vanished for good. It was now generally understood that a good website should spend wisely and grow organically, that grand expectations and a flood of venture capital could harm a good idea more than it could help it. This was a very positive change.

I still couldn’t figure out what the hell to do with Literary Kicks, though. There seemed to be very little activity on the “literary Internet” in 2003. I was aware of only one other site that maintained a large active community of literary-minded people, Readerville, which had more of a contemporary/mainstream publishing focus than LitKicks but didn’t seem to be doing any better at monetizing its traffic.

By this time, LitKicks felt to me like an isolated island. I loved what we did on our crazy message boards (when I didn’t hate it), and I loved the way the site looked, especially with our new front page featuring an old photo of two of our members, SooZen and Mtmynd, in full 1960s hippie regalia, reflecting the site’s Beat/counter-culture past. But, really, I knew the site was nowhere. It was more and more a closed community of regulars, pointed inward. It had to change, but I didn’t yet know how.

I was at this time completely unaware that a whole literary blogger scene was being born, apparently on a part of the Internet that I never visited. Blogs had been around for many years, and I occasionally checked out sites like Dooce, DailyKos or Lileks, often at the suggestion of Caryn and Jamelah, who both ran personal blogs and wanted me to make LitKicks more “bloggy”. I didn’t listen, and I didn’t look very hard for other literary blogs, which is why I never ran into Maud Newton, Mark Sarvas, Jessa Crispin, Sarah Weinman, Michael Orthofer, Laila Lalami, Lizzie Skurnick, Ed Champion, Tingle Alley, Rake’s Progress, Golden Rule Jones, Chekhov’s Mistress, Syntax of Things, Mad Max, Miss Snark or even the familiar Ron Hogan (who was obviously more with-it than I was, having recently turned his long-running Beatrice.com into a blog).

The main reason I looked at blogs at all in these days was to swipe patches of open source PHP code, since blogs tended to run on PHP and I was desperately trying to build a website in PHP and I didn’t know PHP. I scrambled to cobble together a taxonomy-enabled content management system and display system in time for the July 2003 launch of “Interlit”, which changed its name to “Words Without Borders”.

The first three issues, in a subtle provocation, featured fiction and poetry from the three nations that George W. Bush had not long ago labelled as the “Axis of Evil”: first Iran, then North Korea, then Iraq. What a concept! I loved it. I definitely believe that fiction and poetry can prevent wars, and I was more satisfied by this website than by anything I’d done on my own in recent years. Arranging poetry readings “for peace” was fine, but didn’t really have any impact outside of New York City. Here was a site that would actually be read around the world. 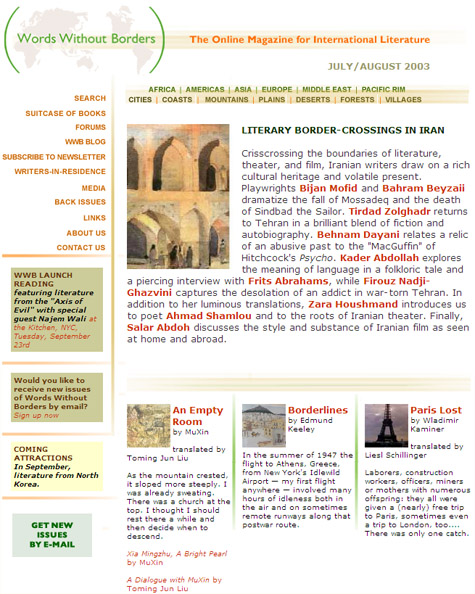 The only problem, now that I was busy teaching and coding again, is that I missed having free time to hang around with the kids and Caryn. At least I’m glad the worst of my “broke-ass phase” had coincided with the summer. I don’t really know if I’d sought out the bottom or not, but I did enjoy the hours.

Now I was busy again, the kids were getting ready to go back to school, and Elizabeth was about to begin her freshman year at Hunter College, in the City University of New York. Of the three children, Elizabeth had been the one most acutely involved in all the family dramas and financial disasters that took place after the divorce. I wish this hadn’t happened, but I think it only helped to make her the strong and self-reliant person she is today.

Daniel and Abigail, meanwhile, had become songwriters. They created a band called “Chocolate Pudding” and wrote many really excellent compositions which they would perform at family get-togethers. I know that all of my relatives can still remember the words to their biggest hit, “Demon”, about a mysterious lady in a black Rolls-Royce who hangs around the Harley Davidson Cafe. Their two instruments were a bongo drum and an invention called a “plung” involving a guitar placed on the floor in front of the person playing it. 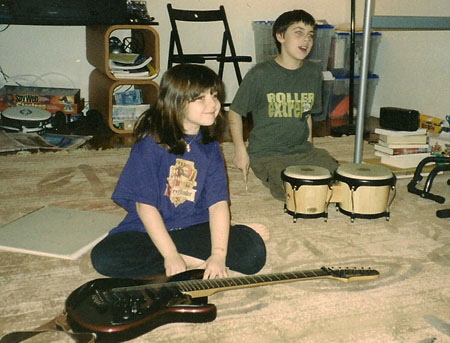 This may have had something to do with a father’s pride, but I saw genius in every song they wrote and decided to encourage their musicianship by buying Daniel a bass guitar and Abby an acoustic. Daniel quickly proved himself to be a serious musician, capable of playing along with bands he was into now like System of a Down, Mastodon, Korn. But I couldn’t let him play my acoustic guitar anymore, because he kept detuning it to play Korn songs.

When Ishmael signed on to the Pequod in Herman Melville’s Moby-Dick, I wonder, did he want a smooth voyage? Or did he hope to find his Ahab? Was he looking to find the limits of human sanity, out there in the darkness of the sea? It’s worth wondering about.

It’s also worth wondering about the fact that when Ishmael jumped aboard a whaling ship he was doing the same thing I was doing when I joined Pathfinder in 1995. Whale oil was the get-rich-quick growth industry of that age. It was used to light lamps. We’re all in the technology business, one way or another.

The last thing I often wonder about Moby-Dick is whether or not Ishmael was any good as a sailor. He probably wasn’t. He was the ship’s sole survivor, but this seems to have involved luck more than skill. Likewise, I often wonder if I was very good at the work I did during the ten years from 1993 to 2003. I was a competent programmer, but I don’t think I was much of a visionary when it came to the business side. I missed a lot of opportunities. Jeff Bezos and I were both working on Wall Street in the early 1990s, and we both heard about the Internet. He founded Amazon.com and got super-rich. I founded Literary Kicks and nearly lost everything I had.

But I don’t think it was my fate to get rich on the Internet, and I wonder if it might have always been my dharma instead to write about it. Many decades ago, my grandparents watched the birth of the radio industry. A few decades later, my parents watched the birth of the television industry. But my grandparents didn’t work for radio networks, and my parents didn’t work for TV networks.

I watched the Internet happen, but as soon as I saw it start to happen I jumped in, and I became a part of it, for better or worse. This memoir is my report, the record of my journey, of what I saw, what I did, and how I survived.