(This is chapter five of my ongoing memoir of the Internet industry.)

Most early websites were hosted by universities or research organizations, and .edu addresses (like http://akebono.stanford.edu, a comprehensive web directory called Yahoo) were far more common than .coms. There was very little commercial activity on the early Internet, and many users assumed the network would remain non-commercial forever. They were in for a rude awakening. A big controversy erupted on April 12, 1994 when a pair of married immigration lawyers Laurence Canter and Martha Siegel mass-mailed a sales message to 6000 Usenet groups. Thus was invented “spam”, and a hell of an uproar that still rages today.

I wanted to create a website of my own, and I had a vague idea that I would call this website Literary Kicks and write about Jack Kerouac. But I had no idea how to get started without a university account. I accessed the Internet via my employer, Sybase.com, but I certainly wasn’t going to put my own writing up on a company server. A clue finally came when my rec.music.dylan friend John Howells announced a Bob Dylan website, the Bringing It All Back Home Page, in June 1994. Howells was a corporate techie like me, an employee of Silicon Graphics, and he pointed me to Netcom.com, a private company that sold Internet accounts with public web server space for 20 bucks a month.

I signed up, but stalled when it came time to create a user name for my new account. Was I “marcstein” or “leviasher”? Tough question, but I was impatient to get started and didn’t want to waste time thinking about it. I was listening to the Beastie Boys “Paul’s Boutique” on headphones at this moment, and the long track that closes the album inspired me to become “brooklyn”, even though I actually lived in Forest Hills, Queens (I would be stuck with this username and known online as “brooklyn” for far too long as a result of this hasty decision).

I created a few files called JackKerouac.html, AllenGinsberg.html, WilliamSBurroughs.html, GarySnyder.html, OnTheRoad.html and Lowell.html (about Jack Kerouac’s hometown, which he wrote about often). Coding the HTML files from my handwritten first drafts, carefully following Tim Berners-Lee’s simple specifications, was a breeze and a pleasure. I loved this Tim Berners-Lee’s mind, whoever he was — HTML was a perfect, brilliant spec. On Saturday night, July 23 1994 I announced my new Netcom URL on three Usenet newsgroups: rec.arts.books, rec.music.dylan and rec.music.gdead (there is a strong connection between Deadheads and Kerouac readers based on the mutually revered figure of Neal Cassady, the subject of both On The Road and the Dead song “The Other One”).

Then I went to sleep, and in the morning I telnet’d into Netcom.com and checked my server logs. I found that over 100 pages had been accessed. The next day it was about 120, and I got several complimentary emails, though they were mostly from friends at rec.music.dylan who wanted to know why I was now calling myself Levi Asher (I had settled on this name, which I’d created for InterText, which meant I had to change my identity all over Usenet).

Several friends also emailed to say “I didn’t know you were so into the Beat writers”. They were right — I wasn’t. I had always liked Allen Ginsberg’s poetry, but it was my big sister Sharon who had been into Jack Kerouac for years. I thought of him as a dated, macho relic from the 1950s and didn’t want to read him, but Sharon (who had actually traveled cross-country, lived in Berkeley, etc.) kept hectoring me, throwing books at me, mailing me magic-marker artworks with quotes like “… a kind of beatness, I mean being right down to it, to ourselves, because we all really know where we are — and a weariness with all the forms, all the conventions of the world …” decorated with peace signs and flowers and hearts. 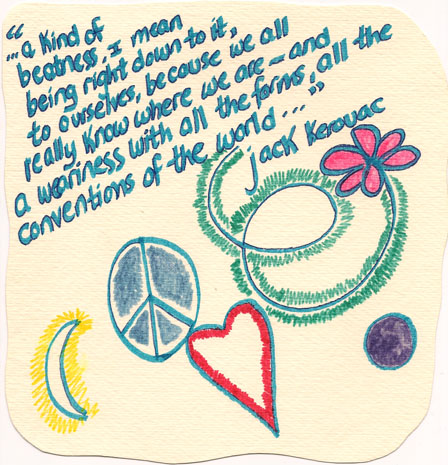 I finally read On The Road in 1992, when I was 31 years old, and then I tore through Dharma Bums, Big Sur, The Town and the City, Visions of Cody, Desolation Angels, Subterraneans and the Ann Charters biography in quick succession. Maybe the reason my musings on the Beats seemed fresh and engaging to others is that the topic was so fresh to me at the time. I wasn’t unloading years of dusty thoughts about the Beats — I was reading Gregory Corso and Michael McClure poems in the morning and writing about them that night. The idea that I was an expert on Beat literature was laughable — I wasn’t even the biggest expert on Beat literature in my own family — but I quickly learned that the web format bestows credibility, and my knowledge of the subject would eventually grow to match my reputation.

I had an ulterior motive for wanting to write about Jack Kerouac. He was a deeply committed (though conflicted) Buddhist, and I felt a strong connection to the Buddhist religion myself. As I added new pages to my new “Literary Kicks” website — NealCassady.html, LawrenceFerlinghetti.html, Columbia.html, GreenwichVillage.html, SanFrancisco.html, Paterson.html (about Allen Ginsberg’s hometown and William Carlos Williams’ poem), LeviFavorites.html (my fifteen favorite novels) I was gearing up to write the page that would be the most personal of all so far, Buddhism.html. I worked harder on this page than any other. I wrote about the historical Buddha, Prince Siddhartha Gautama, listed his Four Noble Truths, described how I’d become a Buddhist myself in my Social Studies teacher Mr. Arnold’s class in 9th grade. Ironically, given the fact that I considered this page the culmination and conclusion of Literary Kicks, it garnered very little interest among my growing coterie of readers, and to this date very few people have ever mentioned this page to me.

At this point, I felt that I was done with Literary Kicks. I was very happy with the reception it had gotten, but I now wanted to create new sites about Herman Melville and Henry James and James Joyce and Franz Kafka and Joseph Conrad, and had already exhausted my own interest in the Beat Generation. I was ready to move on, but fate had other ideas for me.

There were no images on the first version of Literary Kicks — I didn’t own a scanner and didn’t have time to figure out how computer imaging worked. I didn’t have a page about myself, because I didn’t think anyone would care who I was. I was very happy when the Yahoo directory listed Literary Kicks on their literature page, along with Project Gutenberg, Jason Snell’s Intertext and another notable literary site that had just launched around the same time, Alt-X, created by a writer named Mark Amerika who was slightly well known for a good transgressive novel called The Kafka Chronicles. He and I exchanged emails, and I was impressed that Mark Amerika was impressed by me.

I didn’t really like Alt-X, though. It was an earnest and argumentative site about experimental/postmodern literature, but it lacked two elements that I considered essential to good web writing: humor and fun. I wanted Literary Kicks to be a light, easy read. I had no interest in creating a site for experts in any field — anything I would ever write would be designed to appeal to beginners. Looking back, I think this implicit approach paid off well. A junior high school student could read a Literary Kicks page and understand everything on it. I always tried to be edgy and original, but never snobby, and never “niche”. Today, fourteen and a half years later, I still write with a wide audience in mind, and I always will.

Back in the summer of 1994, almost nobody used custom .com domain names for private websites. John Howells’ Bob Dylan website was at http://www.netcom.com/pub/howells, and my site was at http://www.netcom.com/pub/brooklyn. There were also no credit card transactions on the Internet, so I had to pay for my account by mailing Netcom a check for $20 every month. Looking back today, I find this a very amusing fact.

There was a whole lot of future ahead for me and LitKicks, though the Beat milieu would grasp and hold me much longer than I ever wanted it to. I never would get to create my Herman Melville homepage, or my Henry James homepage. They would have been great, but I wasn’t done yet with Jack Kerouac, though I thought I was.