(This is chapter 24 of my ongoing memoir of the Internet industry.)

I had vague dreams of getting rich in early 1999 when I left Time Warner to join iVillage.com, a high-flying start-up about to go public on the NASDAQ stock exchange. It’s a fact, though, that I had no desire for wealth or luxury. I was pursuing money, but material things and lush comforts meant nothing to me. I was pursuing money because I was trying to buy my freedom back.

Nine years of “exciting work” as a software developer in New York City’s financial and media sectors had convinced me that I was going insane. Truly — but gradually, slowly, artistically — I really was. By early 1999 I was spending my waking days as a nervous wreck in a Manhattan skyscraper — paranoid, over-caffeinated, angry. I was not enjoying myself. I felt deeply alienated from the “Silicon Alley” lifestyle that swirled around me, I did not feel I fit in, did not think I could keep “playing the game”. But I was stuck in this lifestyle because, despite my decent salary, Meg and I had no money in the bank, no cushion to fall back on, big bills and a mortgage to pay.

Like many who work in the media industry, I had become hopelessly cynical about my work. I spent more time every day competing with my co-workers than competing with my company’s competitors. I bitterly remembered every insult I’d received, every promotion I hadn’t gotten, all the good work I’d done that nobody understood or appreciated. My work on Literary Kicks offered little satisfaction; I had lost track of why I was running this site again, and wasn’t doing any original writing at all. I was grumpy and tired all the time. I ate too much junk food and was out of shape.

I needed a break, to save my blistered soul. I needed to cleanse Manhattan from my system for a few months. I felt battered, wasted, exhausted with no chance to rest.

“The mass of men lead lives of quiet desperation,” Henry David Thoreau wrote in Walden: A Life in the Woods. It wasn’t just because he wrote so well about trees that I dearly loved that book.

I dreamed of getting rich because it was the only escape hatch in sight. If iVillage went public at $30 per share above my option price, I could start cashing in my 25,000 options at 25% per year, with a total four-year net of $750,000. Would three quarters of a million dollars save my life? Would it let me quit my job and build the publishing company — Literary Kicks Publishing! — I’d been dreaming of? Did I have what it took to build my own future, to work for myself? Maybe, and a nice dot-com stock win would let me find out. But even if iVillage had a great IPO, would the stock price stay high for four years as my options vested? And could I possibly stay sane working for a Silicon Alley dot-com that long?

I knew my life needed to change, in these early months of 1999. I didn’t have a plan, but I knew something was going to break, and soon.

At home, Meg and I fought all the time. We didn’t fight over important things, like other people in our lives (there were none) or religion or politics or how to raise the kids. We fought over stupid things, like whose turn it was to do the dishes, or why I had left the car a mess, or what movie we should watch on TV. These fights were trivial but we allowed them to become our daily routine, our act, our “schtick”. She felt that I was remote, careless, inattentive. I felt she was demanding, bossy, unsympathetic when I came home from work tired or upset. I knew she also worked hard every day as a stay-at-home mother, but it didn’t help that our daily routines and rhythms were so different. Other couples find ways to make this kind of single-income/stay-at-home arrangement work, but it divided us.

Our fights were constant and well-contained. I think we always respected each other, even when the distances seemed unbridgeable. We managed to stay active, enjoyed our kids together, found things to laugh about. The bitterness of our ongoing battles didn’t stop the laughter, but the laughter didn’t cut through the bitterness.

Weekends were my time with the kids, and I’d take them out on adventures, leaving Meg home to catch some rest (in retrospect, this habit of spending weekend days apart didn’t help our marriage either). Elizabeth and Daniel and Abigail and I would jump on a subway in some direction and explore the city, from Flushing Meadows Park to Jamaica Bay to Brooklyn Heights to Central Park, where we’d climb rocks and clown around and eat hot dogs and make up games. Or we’d go out to Long Island to hang out with my parents and brothers and sisters and their kids. This stuff always refreshed me; weekends were the days when my life felt right.

Elizabeth was 13 years old in 1999. Of the three kids, she was the one I talked to most, the one who was most interested in the things I was doing (partly because she had an uncanny interest, from her youngest days, in what all adults were doing). We went to concerts together often, had seen Phish together several times, went to the Tibetan Freedom Concert where we saw the Beastie Boys, Bjork, Alanis Morissette, Lee “Scratch” Perry and Rancid, and walked along with Adam Yauch and a bunch of orange-robed Buddhist monks on a quiet ceremony to bless the East River between Queens and Manhattan. It was easy, hanging out with Elizabeth, to forget that she was still a kid. I think she liked it that way.

Daniel turned 8 in February of this year. Of the three kids, he was the one I had the most fun with. He was always up for a game, a competition or a challenge. We had discovered various configurations for playing “catch” with nerf footballs or handballs in our crowded living room, and were constantly throwing things back and forth. We loved to go out and explore the city together. We’d sneak into train yards, walk across bridges, pick points on the map and just go. He was usually restless indoors (and I was too) so on days we couldn’t go out we’d blast music and jump around on the couches.

Abigail, 4 years old, was the one whose personality reminded me most of my own. She was quiet, introspective and capable of intense focus on particular tasks. With two older siblings like Elizabeth and Daniel in charge, she had little chance of controlling anything, and instead often maintained a Taoist calm as chaos reigned around her. She would happily follow along with any game or activity Elizabeth or Daniel chose, but with a sly smile hinting that she had her own opinions about what was going on, and just might reveal them if ever asked.

The possibility hadn’t even occurred to me, as the new year began, that our supposedly stable and externally “perfect” family configuration would blow apart before the end of the year. I guess it would have been shocking to anyone who looked at us at the time. 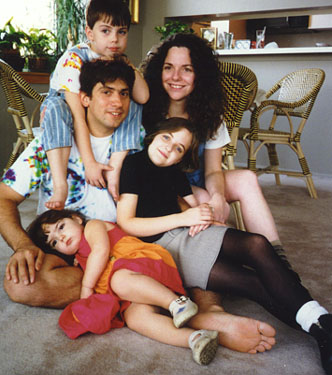 But I was already converging on a “weekend Dad” schedule with the kids. During the week, I’d often spend evenings in Manhattan with my ever-evolving group of beatnik/literary or webby/techie friends, many of them younger guys without wives or kids. I’d drop by Hewitt Pratt’s place and listen to music, or go to the Nuyorican Poetry Cafe or see an indie film with Laki Vazakas. I was spending a lot of time with a new friend named Brian Hassett, a highly extroverted Kerouac nut who worked as an office temp for MTV.

Like me, Brian was a “one-book wonder” — he’d written a book about how to live the wild life in New York City while working as an office temp, but decided the commercial book publishing game was a dead end, and we now schemed together how we could take the alternative literary scene by storm with a series of live spoken word poetry events. This was our plan for 1999. Like me, Brian loved to sneak around; while working in the MTV building on Times Square he’d figured out how to get up to the skyscraper roof, where a gigantic postmodern concrete assemblage looked like rotary blades ready to take off into outer space. This roof wasn’t meant for visitors, but we’d sit up there and smoke bowls and plot how we would take over New York City’s literary scene together.

I was definitely apprehensive about the new job I was about to begin, not least because for the first time in my career I would have a real executive “title” — Director of Systems Engineering, responsible for a staff of about 12 techies. I knew this was going to be an exciting year, but I didn’t know how.

It’s funny how little we ever know about what awaits us. There would indeed be something for me at iVillage, but it wasn’t money. There was something I needed more than money, in fact, and I would eventually find it at this new job. But that was the last thing I could imagine as I sat on that skyscraper roof with Brian and contemplated tiny brilliant Times Square beneath us, the great blue sky above, the hopes and regrets that filled our minds.