Technology Weekend: What I’m Working On 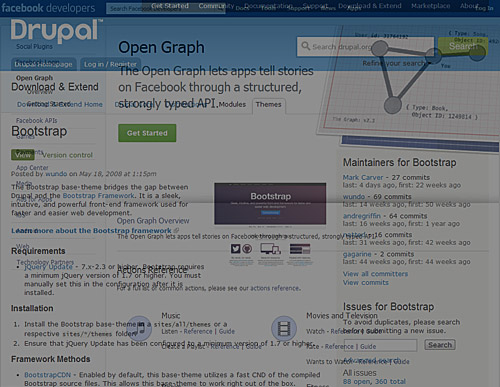 Some people think Literary Kicks is a blog. That’s because I pretend it is.

However, I only started to describing Litkicks as a blog in the mid-2000s, by which time the site had already gone through a lot of changes. No matter what format Litkicks is in, it is always for me a part of a single extended experiment.

The experiment is about technology and communication, an exercise in digitally-enabled discussion, cultural reflevity and personal expression. I was a techie before I began running a website, and I like to use Litkicks the way a techie uses a laboratory. I use it to explore new ways to reach people with words, to see what happens when strangers around the world make real-time connections through shared ideas. It’s an experiment I also carry out within the various web development projects I do for a living — because, no matter how mundane a project is (luckily, most of the time, I get to work on projects I like), every web project is an experiment in mass communication. That’s what makes the work always an exciting and suspenseful challenge.

There is no Philosophy Weekend this weekend because lately I’ve been back in the lab in a major way, cooking up a new website that will soon launch as a part of Literary Kicks. The new website will be devoted to poetry. Not snooty poetry of the type that wins awards in ballrooms for people wearing tuxedos, but rather the kinds of poetry that all of us write and share, even when we don’t know we’re doing so.

This site is going to launch sometime in the next few days — and I’ve been so crazed crunching away at it that I really can’t manage any thoughts about ethical or metaphysical philosophy at all today. I can’t even spare the time to describe the technical work I’m doing right now, except to say that I hope it will all appear simple to you (that is, I hope the user experience will be as bright and clear as a glass of water). In order to achieve that illusion of simplicity I am putting together quite a complex (and sometimes chaotic) back-end software conglomeration on my Linux server.

That’s about all I have the time to explain right now, and the image on the top of this page gives a hint (which will mean something to my techie readers out there, and hopefully to non-techies too) as to what APIs and platforms are powering the new website I’m about to launch. The big three here are:

Drupal: of course, Drupal has been my favorite open source PHP web content management framework for many years (it’s also Barack Obama’s). As Drupal 7 begins to enter its twilight years (Drupal 8 is about to launch), it still remains, in my opinion, the best platform choice for a serious web content management system developer. The Drupal community always manages to maintain very high software quality standards as well as ethical standards. It is the people (even more so than the software, which is powerful but demands a steep learning curve) that make Drupal great.

Bootstrap: Bootstrap is a layout/user experience platform that can provide an excellent CSS and JQuery structure for a responsive (that is, multi-screen and mobile-friendly) web design. It was created by techies from Twitter, and encourages a highly focused, spare, clean design. The new poetry site will be my first Bootstrap site, and I’m using the Drupal Bootstrap theme to put the pieces together. (Unfortunately, the Drupal theme only works with Bootstrap 2, so I’m not yet able to work with Bootstrap 3, which was just released).

Facebook Open Graph API: this is where it gets really exciting for me. I know that many people dislike Facebook, and I share their concern about this social network’s growing power over all our personal lives. As a software developer and web community enthusiast, though, I can only admire Facebook’s innovations within the web social space. If you are a web techie, I believe you have to be crazy to ignore Facebook. Why, a friend recently asked me, should any web developer pay attention to Facebook? “Because it’s where the people are,” I answered. Also, integrating with Facebook through the Facebook Developers program and the Open Graph framework is a technical breeze, a surprising pleasure. (I wish I could say the same about, for instance, building an Apple/iOS app, which is like a journey through bloated object-oriented library purgatory). You can say what you want about Mark Zuckerberg, but he deploys better APIs than Steve Jobs ever could.

Anyway, once I launch this new poetry thing, I hope I’ll succeed in making it as easy as possible to like, share and respond to poems with Litkicks readers as well as (optionally) with your Facebook friends. The Facebook Open Graph integration is the missing piece, actually, that convinced me that it was finally time to revive our Litkicks Action Poetry board with a new look and feel. That’s about all I can say right now, but I hope you’ll all check it out when it launches in a few days. Okay, now I’m getting back to work …