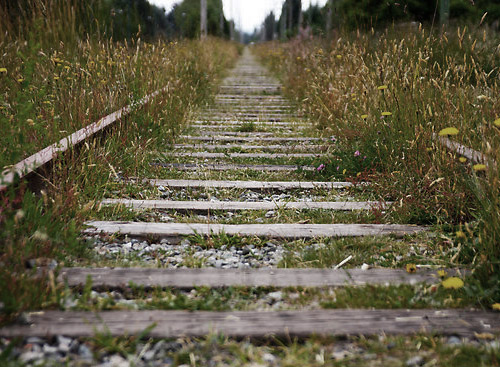 It’s funny that some people think presidential elections don’t matter. There’s little doubt that many things will change quickly if Americans make the nihilistic choice to empower Mitt Romney and Paul Ryan to lead our government in 2012. Every woman’s right to privacy over her health decisions will be threatened. The gains made via Obamacare against corrupt health insurance practices will be reversed. A newly aggressive and muscle-bound foreign policy (think: George W. Bush and Dick Cheney) will make an unwelcome return. In fact, so many changes would occur that we the people have barely even begun to discuss all the vital things that will change if we give these two out-of-touch plutocrats a mandate to run our government according to their ideas.

Trains are wonderful, beautiful, practical and highly helpful things. Could anybody possibly disagree? As a kid growing up in the dull suburbs of Long Island, New York, I learned to love trains early, because the Long Island Railroad was my lifeline to New York City, Greenwich Village, Times Square, St. Mark’s Place, the Strand bookstore, Soho, the Museum of Modern Art, Madison Square Garden.

Later, I used Amtrak to travel to my college, and then used New York City’s subways to get to work. I think many Americans have relied on public transportation to improve their lives the same way I have. Public rail transportation is a win-win-win-win: it’s a cheap and easy way to get around, it’s far better for the environment than private cars, it enables people to get together with families, increase job choices, widen their options for recreation and entertainment. Public transportation is necessary for people who are disabled and cannot drive, or who live in cities and don’t own cars, or can’t currently afford cars but are taking trains to earn money so that they can afford cars. Can you imagine life without trains? Get ready, because Mitt Romney and Paul Ryan are running on a platform to destroy Amtrak, our national train system.

Have you heard about this before? Most people I talk to haven’t, even though its an undisputed fact that this is part of the Romney/Ryan economic plan. Amtrak (which has proudly served the entire nation since 1971) is funded by taxpayer money, and even though this is some of the best spending the government can possibly do in terms of improving our lives, our economy and our environment, the Republican party has decided that the half a billion dollars the government spends on Amtrak each year is unnecessary.

The railroads should be privatized, they say. It’s amazing that they are willing to conduct financial experiments with services that are so vital to our lives. (They also wanted to privatize Social Security during the Bush presidency, which would have created a tsunami of poverty if the Democrats hadn’t stopped this from happening — guess which side Paul Ryan was on?)

If Amtrak loses its public funding, it will cease to exist, and the impact will be immediate and devastating. Have the Republicans considered how many people will lose their jobs if they can’t use Amtrak to get to work? Do they realize many families rely on Amtrak to help them gather together for holidays? Have they considered the loss in entertainment and travel spending, and the impact it would have on the economy? Have they thought about what it would do to our crowded highways, to our fresh air and to our fossil fuel consumption, if trains cease to be a viable alternative to automobiles?

Instead, the kinds of geniuses who gave us Bain Capital and the 2007/2008 Wall Street disaster only see Amtrak as unnecessary spending, as coddling for the teeming middle and lower classes who can’t afford to travel by car or airplane. They complain that Amtrak has never earned a profit, not realizing that the profit is in the way it improves all our lives. Yes, it costs taxpayer money, but this is what taxes are for. There is hardly a better way to spend money than on public transportation, and there is also not the slightest bit of evidence that it would help our economy to stop paying $500,000 a year of taxpayer funds to keep our trains moving.

The anti-Amtrak contingent — led by Mitt Romney and Paul Ryan — also complains that Amtrak is badly managed and inefficient, and this can strike a chord among American voters, because Amtrak customers are often frustrated by problems with its service. When I talk to people about the politics of taxpayer funding, I often sense a hostility towards Amtrak itself, and a desire to punish the allegedly incompetent Amtrak executives by taking away their budget. This is an impulse that really needs to be checked. It’s true that a few faceless executives would suffer if Amtrak funding were eliminated, and maybe it’s even true that some of these executives deserve to suffer. But, if we cease to have a viable national train system in the USA, the suffering of a few executives will be insignificant compared to the suffering of the American people.

Instead of destroying Amtrak because of suspected poor management, we should expect government to fix the problems, not destroy the service. And do we really know that there is mismanagement? In the past decade, Amtrak’s service problems were not helped by the previous Republican president’s assaults on public transportation funding (yes, like so many of his proposals, Romney’s Amtrak policy is an echo of George W. Bush’s), and Amtrak’s mediocre record of service may reflect the fact that it has already suffered through unwise budget cuts. We should spend more taxpayer money on Amtrak, not less. It’s the type of taxpayer spending that keeps our economy alive.

A few years ago, I began living in Northern Virginia, and travelling between Washington DC and New York City frequently by Amtrak. It’s a three-hour journey, it costs about $130 each way, and sometimes I get frustrated by the late trains, the grimy seats, the crying babies and the frequent breakdowns. However, Amtrak gets me where I need to go. I can’t imagine the United States of America without Amtrak.

Politicians like to use the word “freedom” a lot. For Americans like me, public transportation is what enables freedom. I can’t imagine how the American people could consider electing a president in 2012 — a super-wealthy one, of course, who probably doesn’t know many people who rely on Amtrak for their daily lives — who doesn’t even want to cut our trillions of dollars in military spending, but considers half a billion dollars in Amtrak funding to be a waste of taxpayer funds. It’s a sick idea, a Randian idea (of course), and an insult to every American’s intelligence.