Vision in Combray: Proust Beyond the Madeleines Concluded 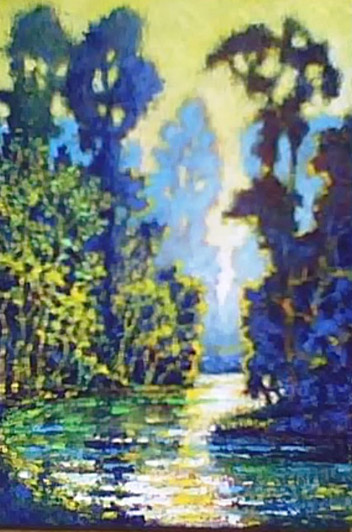 (In June 2009, Michael Norris began a series of explorations of Marcel Proust’s long masterpiece In Search of Lost Time that concludes with a personal coda today. Thanks to Mike Norris and artist David Richardson for this extensive work! A page devoted to the entire series has just been created here. — Levi)

I awoke to a hellish clanging. Bells! Sunlight filtered in through the shutters. I shifted gradually from sleep to consciousness, and as I did, I remembered where I was. Combray. Well, Illiers-Combray. The French village that inspired Marcel Proust. The town started its life as Illiers, and was renamed Illiers-Combray in 1971 on the occasion of the 100th anniversary of Proust’s birth.

The bells continued relentlessly. Of course! It was early Sunday morning. It was the bells of the church, Saint Jacques (Saint Hilaire in In Search of Lost Time) summoning the townspeople to mass. My wife was still sleeping, oblivious to the din. I slipped into my clothes and went downstairs.

The hotel where we were staying, Hôtel de l’Image, is the sole lodging in the center of town. The only other hotel is near the railway station. The Hôtel de l’Image stands on the town square, sandwiched between a grocery store and a pharmacy, just a few steps from the church. There is a single café on the square. The hotel bar serves as an alternative to the café for those who want to get in out of the hot morning sun.

I took a seat at the far end of the bar and ordered an espresso. It was wonderfully cool inside, and a breeze blew in from the door that opened on to the street. Outside, I could see the bright sun already beating down on the outdoor tables of the café.

A well-dressed man in a suit walked in and stepped up to the bar. He ordered a coffee, and stood chatting with the hotel keeper, who was also the barman, cook and porter. The hotel keeper was tall, thin and very sociable, like Theodore the grocer’s boy from the novel, if Theodore had grown up and taken over the hotel.

Another man entered and came up to the bar. He was dressed in work clothes, perhaps a local farmer. He nodded hello to the well-dressed man, shook hands all around, and the hotel keeper poured him a glass of wine without a word being exchanged. The three then got into a deep discussion of something, the gist of which I couldn’t grasp from my perch at the end of the bar.

I finished my espresso and headed back upstairs. On the second floor, it was beginning to get warm. Away from Paris, in the middle of France, the summer days are sunny and hot. Air conditioning is non-existent. You learn to appreciate shade and cool breezes, to savor the evening when the sun sets and the world cools off.

My wife and I had been to Illiers-Combray before. This time we were passing through, on our way from Brittany to Paris. Illiers-Combray was a good place to stop for the night. We had a rental car, and we had decided to drop the car off in Chartres, 28 kilometers away, and take the train to Paris, thus avoiding the stressful Parisian traffic.

We had breakfast at a table in the hotel bar – coffee and croissants – and then headed out to explore the town. The square was bustling with people and traffic. The grocery store and a few other shops were open until noon, and the villagers and people from the surrounding countryside were hurrying to lay in provisions before the town closed up at midday and went into its deep Sunday afternoon slumber. We bought some fruit and some sandwiches – the French kind, made with half a baguette and consisting of ham, ementhal cheese, and crudités: lettuce, tomato and sliced hard-boiled egg. This would serve as lunch later on. We also bought a couple of bottles of water and a bottle of Côtes du Rhone wine.

We walked down to the café and decided to have another coffee and sit for awhile before the day became too hot. A couple chatted at a table nearby. Two small children walked by, holding their mother’s hand.

Illiers-Combray is a typical French village. The streets are narrow and lined with houses and shops, which abut each other, forming a grey limestone wall broken only by ancient wooden doors. The windows at this time of day are shuttered against the coming heat.

And yet, after reading Proust, the town has a familiar feel. Many of the daily rhythms have not changed since the Belle Époque, even though we are now ten years into the 21st century. The shops close at noon and re-open at two o’clock. The café and the church are the focal points of village life.

Combray is a thread that runs continuously through In Search of Lost Time. Even in the last volume M. is able to summon up a clear picture of this childhood place. It is his point of beginning – the dawning of his awareness of the world.

My Proustian awareness began years before, when I looked at the seven volumes of In Search of Lost Time (in those days known as Remembrance of Things Past) resting in the stacks at the Chicago Public Library. When I later read the work, I started on an adventure that took me to France and beyond. Now I was once again sitting in the warm sun at the source – Combray.

The sense of place is strong in In Search of Lost Time. The Guermantes way, Swann’s way – these places permeate the novel, running through the work like the Vivonne runs through the village. Strange that a work of literature would bring me to a small French town thousands of miles from my home and miles from the typical attractions that bring one to France.

Some books leave you with the satisfaction of an intricate plot. Others leave you with indelible characters. Certainly In Search of Lost Time has indelible characters. But there is more. The idea of imagination versus experience is something that I had never really thought about until I read this work. The hero is constantly confronting events that he has built up to a vibrant hue in his imagination, only to be disappointed by their reality. And yet as time passes and he reflects on the event, his imagined version melds with the actual and he is left with a memory even richer than his original conception.

This is what In Search of Lost Time is all about. Imagination confronting reality, and then reconciling it into memory. Memory which fades, but which can be called up involuntarily by some external trigger: the taste of a madeleine dipped in tea, the rough texture of a napkin, the sound of a spoon tapping a plate. We have all experienced this – Proust brings it to vivid life.

Sitting at the café in Proust’s Combray, I could envision M. as a young boy – his longing to meet the Duchesse de Guermantes, his thoughts of Balbec, his conversations with Swann, all of the desires and dreams which set him on the great adventure of his life. It all began in this small village.

I looked up at the church belfry. The bells were ringing again, this time sounding the hour. This element of Proust’s Combray was indeed unchanged, “a church epitomising the town, representing it, speaking of it and for it to the horizon.”

I may never return to Combray, or I may visit it many more times. But I, like Proust, have a stored memory of this place. The sun on the village streets, the hotelkeeper. Waiting only for some unsuspected cue – a church bell, perhaps – to bring it back to life.