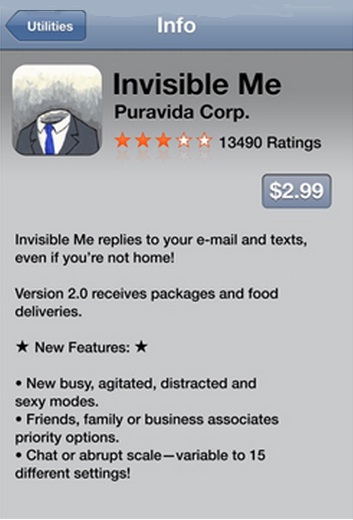 1. Here at Litkicks, we love pretty much anything David Byrne ever does. His latest enigma is a series of nonexistent iPhone apps, including “Invisible Me” above, which will be displayed as part of a Pace Gallery show called “Social Media” in New York City this fall.

2. “Very Naked, No Lunch.” So intones an Austrian hipster in Beat Today, a film that explores the meaning of the Beat Generation as it is manifested today within the counterculture of Central Europe. It’s by Tilman Otto Wagner of Vienna, who has also written a book called The Beat Generation and Scholastic Analysis.

3. Exciting news! Litkicks favorite Art Spiegelman is writing a book about his book Maus, aptly titled MetaMaus. He’ll be appearing at the 92nd Street Y in New York City to explain what this book will be.

4. T. S. Eliot devotees angered by plans to develop East Coker. Maybe someone should write four quartets about it.

6. Sadie Stein, granddaughter of Fiddler on the Roof author Joseph Stein, on the legacy of Sholom Aleichem.

7. Here are a couple of independently published books worth your time: Prince Of This World: A Novel

by George Simeran and Why They Cried

by short story writer Jim Hanas, who ponders here the existential wonder of ever selling any fiction books at all.

9. Would it have ruined everything if Jack Kerouac and Neal Cassady had a GPS? I don’t think so. I use Google Maps on my iPhone often, and I really love it, yet I find my life still lacks an overall sense of direction.