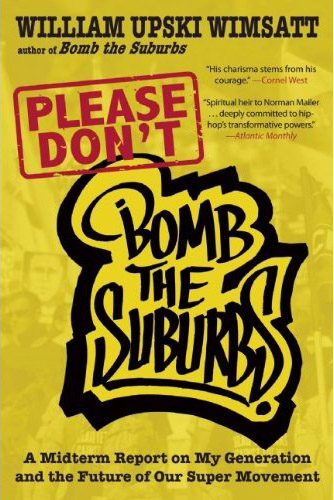 Sometime during the crazy mid-1990s, young graffiti artist and Chicago activist William “Upski” Wimsatt wrote Bomb the Suburbs, one of the quintessential early Soft Skull books. The title was an attention grabber, though of course to “bomb” a place is to spray-paint your tag on a wall, and no call to violence was ever intended.

But a few more crazy years have passed since the mid-90s, and some places around the world really have gotten bombed — Oklahoma City, New York City and the Pentagon, Iraq and Afghanistan — and the title of Wimsatt’s new book Please Don’t Bomb The Suburbs (published, this time around, by Akashic) deals with these changes head-on. The author’s introduction explains the conundrums he’s faced:

I had nothing to do with the Oklahoma City bombing. It was 180 degrees opposite of my values and worldview. Yet suddenly, the title of my book wasn’t so cute anymore. After September 11, it became even less cute.

Fast-forward to 2008. A lot of my friends were involved in the Obama campaign. I had been campaigning for social change for twenty years. This was the most exciting and important campaign of my lifetime. I was already volunteering. And one of my friends asked me to be on an advisory committee. Exciting. *Just send me your resume, you’ll be vetted and then* —


We often forget how real the consequences of writing can be. Wimsatt was sensitive enough to understand that it wouldn’t have helped Barack Obama to give Fox News and Rush Limbaugh another “Bill Ayers” to run up the flagpole. I like to think the Obama campaign would have found a place for Billy Wimsatt if he had pushed the case, but he was gracious enough not to, and had to miss out on helping with his fellow Chicago-an’s historic electoral victory. Two years later, Please Don’t Bomb The Suburbs is Wimsatt’s attempt to establish a new footing.

This slim, readable book is a meditation upon the art of populist political activism. I especially like the historical sections, like the busy full-page chart titled “Movement Timeline: 1985-2010” which lists the many different arenas in which hopeful changemakers have played their parts — Culture, Media, Philanthropy, Technology, Alliance Building, Environment, Racial Justice, Gender and Sexuality, Community Organizing, Criminal Justice, Anti-War, Electoral Politics, Labor and Economic Justice, Education and Service — along with the successive developments in each. We meet many characters and learn about some activism legends, from Larry Hoover to Lisa Sullivan to Eli Pariser. Wimsatt’s level of sincerity and enthusiasm is refreshing and bracing, and the book stands as a reminder that anybody who wants to help improve the world can find plenty of ways to get busy, and also have a great time doing it. Spray cans optional.

There’s less street attitude than in the first book — less hiphop culture and graffiti culture, more serious hard work on the streets. I’m glad Billy Wimsatt had the will and the courage to write this much-needed sequel, and I hope he’ll have the occasion to produce a third installment in the Upski chroncicles, hopefully the most triumphant one of all, in the next fifteen years.