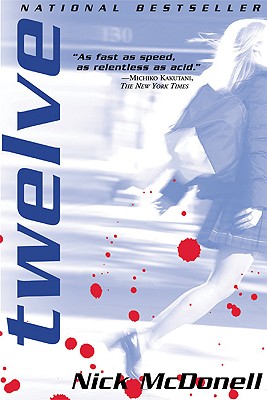 It takes incredible skill and determination to write a novel, especially one as defining and creative as Nick McDonell’s debut, Twelve. This book would be great on it’s own. However, given the fact that the author was only seventeen years old at the time of its conception, it borders on exceptional. Indeed, McDonell captures the spirit of modern adolescence flawlessly.

Hunter S. Thompson, established author of Fear and Loathing in Las Vegas, a novel which defined the 1970’s, wrote: “I am afraid that he will do for his generation what I did for mine.” Though he might sound like an egotist, and likely is, he may be on the right track. My generation has been in need of a serious literary voice and McDonell fills the void nicely. Filled with pop-culture references to everything from FUBU to Sublime, the novel certainly has teen appeal. However, it is a profoundly “grown-up” novel, rich with subtle themes, innuendo and enough sex and violence to fill a Quentin Tarrantino movie.

Though McDonell’s dialogue is occasionally cliche, it is filled with memorable quotes and is remarkably true to modern “teen speak” without trying to be cool. “Parents suck, even though, like I tell my mom everything, but not everything everything, you know?” He writes, flawlessly capturing the way most teen-age girls discuss things. This guy is remarkably insightful about girls for a seventeen year old.

White Mike, McDonell’s unlikely hero, is a prep school graduate taking a year off between high school and college presumably to help his dad out in his restaurant business. However, like many of the privileged characters portrayed in the novel, White Mike’s dad is conspicuously absent and Mike is given free reign of his life and time. Mike’s cousin, Charlie, gets him involved in drug dealing. Ironically, White Mike has never so much as smoked a cigarette or a had a sip of beer.

McDonell, a “rich” kid himself, exposes the dark underbelly of privilege. This book feels so real that one can’t help wondering what part of it was taken from the author’s own experience. That, or he’s simply one of the most talented young writers to have come around in a long while.

Critics have compared Twelve to J.D. Salinger‘s classic “coming of age” tale of adolescent cynicism and angst, The Catcher in the Rye. Both feature a disillusioned “protagonist,” fed up with their respective lives of privilege in New York City. Salinger’s Holden Caulfield and McDonnel’s White Mike are enigmatic; their intentions and desires never fully revealed, despite the candor of the novels in which they reside. However, that’s where the similarities end. McDonell’s writing style is much more akin to Jim Carroll’s Basketball Diaries. It’s raw, honest and dangerous.

The book is written in an interesting format and McDonell ignores many literary conventions. Some of the 97-odd chapters in this 256 page novel are merely paragraphs long, conveying a sense of urgency and thus pulling the reader into the tangled web McDonell weaves. He also jumps around from character to character; one minute we’re dealing drugs with White Mike in Central Park and the next we’re watching a “good girl” snort coke in her bedroom.

At once thoughtful and entertaining, Twelve is a rare find. Grab a cup of coffee, sprawl out on the couch and read Twelve. Be prepared: you won’t be able to put it down.

Home • Archives • About This Site