Philosophy Weekend: Adam Hochschild and the Serious Study of War 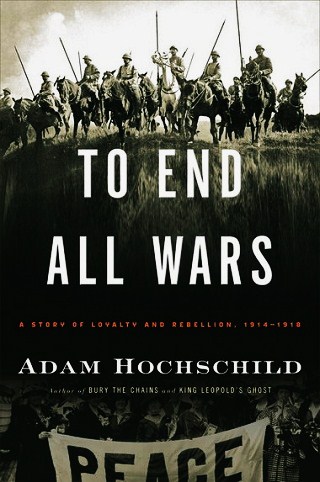 Adam Hochschild, a popular historian whose King Leopold’s Ghost: A Story of Greed, Terror, and Heroism in Colonial Africa

spelled out the full story of the Belgian debacle that inspired Joseph Conrad’s Heart of Darkness, has written a powerful new book about the loose coalition of pacifists and activists that fought bitterly against England’s participation in the Boer Wars and World War One a century ago. The book is called To End All Wars: A Story of Loyalty and Rebellion, 1914-1918

Hochschild is a rare popular historian who writes not about subjects designed to make male readers feel good about their masculinity (a visit to a bookstore’s history section, after all, gives the impression that the Civil War and World War II were the only two wars ever fought) but rather about stunning or vexing episodes from our past that we know nothing about. I was not aware that there was a vigorous pacifist movement in England a hundred years ago. The invisibility of this past movement reminds me of the invisibility of the pacifist cause today, and Adam Hochschild is certainly interested in making the same connection. Here he is in the book’s introductory chapter:

Where today we might see mindless killing, many of those who presided over the war’s battles saw only nobility and heroism. “They advanced in line after line,” recorded one British general of his men in action on that fateful July 1, 1916, at the Somme, writing in the stilted third-person usage of official reports, ” … and not a man shirked going through the extremely heavy barrage, or facing the machine-gun and rifle fire that finally wiped them out … He saw the lines which advanced in such admirable order melting away under the fire. Yet not a man wavered, broke the ranks or attempted to come back. He has never seen, indeed could never have imagined, such a magnificent display of gallantry, discipline and determination. The reports that he had had from the very few survivors of this marvellous advance bear out what he saw with his own eyes, viz, that hardly a man of ours got to the German front line.”

What was in the minds of such generals? How could they feel such a slaughter to be admirable or magnificent, worth more than the lives of their own sons? We can ask the same question of those who are quick to advocate military confrontation today, when, as in 1914, wars so often have unintended consequences.

The book begins in South Africa with the Boer Wars, which set up the expansionist tensions between England and Germany that erupted in the First World War. The pacifist movement that made England’s path to war more difficult included many leading suffragettes (Charlotte Despard, Emily Hobhouse, the Pankhurst family) and socialists (Keir Hardie, Bertrand Russell). Hochschild’s method in To End All Wars is to recover the human stories behind this movement, and especially to highlight the many interpersonal coincidences and contradictions — family relationships, love affairs — that complicated this public debate. Hochschild’s portraits are vivid and his stories are gripping, but my favorite thing about his book is simply that it exists.

A year ago, kicking off this Philosophy Weekend series, I asked whether pacifism was in a coma, or whether it just seemed that way. I never doubt that the ethical question of war is the premium philosophical question of our time, and I’m sure that the human race will eventually manage to rid itself of the plague of militarism (and the all-powerful military profit motive) that pervades our world today. What we need from our writers, academics and historians today is a serious study of war. Not a record of battles, not a celebration of glory and sacrifice, but an examination of the nature of war itself, and of the intellectual and cultural threads in society that suppress common sense and enable this disease.

Any committed pacifist must feel lonely and isolated, but To End All Wars is the latest example of a major publication by a notable, award-winning author that tackles the question of pacifism directly, and with serious intent. Other recent examples include Nonviolence: The History of a Dangerous Idea

by Mark Kurlansky and the groundbreaking, still controversial Human Smoke: The Beginnings of World War II, the End of Civilization

Is something good brewing here? Perhaps a certain awareness is spreading? I hope so. If you’d like to learn more about To End All Wars, here’s a probing 40-minute Bat Segundo interview with the author, and here’s an appreciative article by Christopher Hitchens that recently appeared on the cover of the New York Times Book Review.