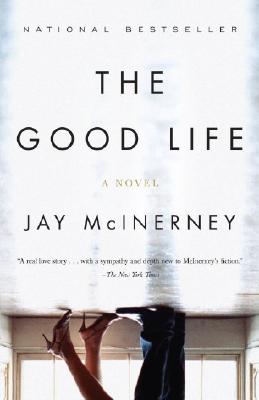 I’m not sure why I like reading Jay McInerney. He’s a moderately popular novelist with a shallow intellectual range and a level-headed narrative tone, and yet I felt inexplicably excited to read his new The Good Life, which is about two married Manhattan couples before and after September 11, 2001. As I waded through the first chapters I wasn’t sure why I was reading it at all.

Most novels are about people with big problems, but a typical Jay McInerney character has far less problems than, say, me. The Good Life is about four New Yorkers with fabulous careers, trendy hobbies and great real estate. One couple has a treasured Tribeca loft and expects Salman Rushdie for dinner (he’s a no-show), and that’s the less wealthy pair. The display of vapid values, famous names and expensive logos in the first few chapters is almost over the top, and I nearly tossed the book aside in a pique of Marxist disgust at that point. But I decided to stick around, to see where Jay was going with all this.

In fact, McInerney knows how to engineer a story, and it was clear that these early displays of jaded prosperity were a setup for the obvious pivot. It’s September 10 2001, and a character steps out of a cab:

“… pausing to look up at the huge monoliths looming above her …”

Tribeca is only blocks away from the World Trade Center, and this neighborhood has been McInerney’s literary backyard since the young magazine yuppies of Bright Lights Big City snorted coke in the bathroom at Odeon. Now his characters are older and attending more sophisticated parties, and we leave one of them off at the dregs of an awful society ball on the evening of September 10. Then it’s September 12, and the same man wakes up outside, injured and caked in dust, desperately trying to dig a dead friend out of a mountain of burning rubble.

This is Luke, once an investment banker. He begins volunteering at a ground zero food relief station, along with Corinne, a modern downtown mother living inside a poundingly dull marital tableau. Luke and Corinne need each other, they fall together, and in the last few pages they blast back apart.

The ending is powerful, and justifies many flaws in the lazier pages that precede it. Overall, I enjoyed reading the book, but I am far from sure if it has what a book needs to be read by future generations or not. The writing is sometimes witty but never brilliant, and as always Jay McInerney’s literary influences seem to range all the way from Hemingway to Fitzgerald. A Good Life feels much of the time like a good article in a toney magazine. That’s what I didn’t like.

What I did like is the quiet conviction and honesty of the story, and the humanity McInerney invests in his characters. It’s hard to believe McInerney every wrote a book about yuppie coke fiends, because these characters are all paragons of responsibility and maturity (or three of the four main characters are, anyway, and the fourth, Luke’s rich bimbo wife, shows up mostly as a comic foil for the other three).

I also liked the truths revealed at the sad but uncertain ending. I was expecting a happier resolution, but I’d forgotten that McInerney’s favorite book is The Great Gatsby. Two boats against the current; two buildings down. A Good Life doesn’t fully justify itself until the ending of the love affair, which reveals itself as both surprising and inevitable.

Some other opinions on this book can be found here, here and here.