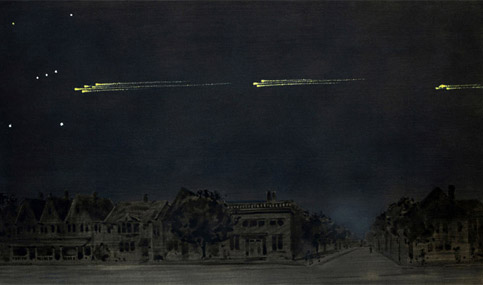 1. “Our main leisure activity is, by a long shot, participating in experiences that we know are not real.” A good Chronicle of Higher Education piece by Paul Bloom about what it means for humans to have the capacity to imagine. We often use terms like “imagine” and “dream” in a sort of gushy hopey way — “follow your dreams” and all that — but it’s also worth pondering at the phenomenological level the fact that this mechanism, this remnant of existence called “imagination”, has immense presence and power in our lives.

2. Very cool: a forensic astronomer has identified the meteor shower that inspired a poem by Walt Whitman. “What,” Walt asks, “am I but one of your meteors?”

3. Okay, so … because I am interested in e-book formats and also because I like Guns ‘N’ Roses, I followed GalleyCat/EBookNewser’s cue and spent $4.99 downloading a new “Vook” — a video-enabled book/app hybrid — for my iPod Touch based on Reckless Road: Guns N’ Roses And The Making Of Appetite For Destruction by Marc Canter. My verdict? The book is “eh”, the Vook integration sucks. I thought I’d get rare live footage of the band, but instead I get lots and lots and lots of talking head interviews exactly like VH1 “Behind the Music”, interspersed with text passages that stand awkwardly next to the video segments, generating no chemistry whatsoever. As far as technological innovation goes, there’s not a damn thing in this presentation that you wouldn’t have gotten on a Voyager CD-Rom in 1995, when Voyager CD-Roms were the hot new thing.

7. Sometimes I make fun of trendy novelists with fancy MFA degrees. Why? Because there are so damn many of them. This list of writers “with credentials” is not the whole point of D. G. Myers’ article about regional writing, but the list is rather eye-opening.

8. Sonya Chung at the Millions on breaking up with a book, mid-read. Oh, can I ever relate to this. Like Sonya, I’ve been heartless to many, many books.