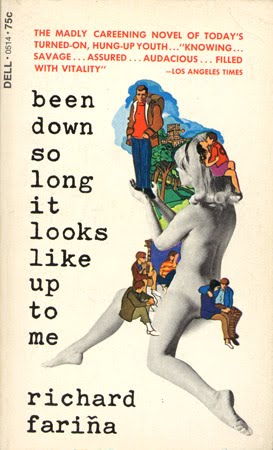 (One of our many missions here at Litkicks is to call attention to a particularly neglected period in American literature: the experimental/postmodern fiction of the 1960s. Here’s the debut appearance on this blog of April Rose Schneider of Ohio, Tennessee, Florida, California, Bangkok and New Mexico, telling us about a favorite novel by a writer who died too young. — Levi)

An old adage says lightning never strikes in the same place twice. Don’t believe it. In the electric, eclectic atmosphere of post World War II academia, a series of refreshing lightning bolts sparked a new genre of American literature beginning in the early1950s. In the afterglow of the last Great American Renaissance [1950-1975] the fading light of those embers — named Kerouac, Burroughs, Ginsberg, Pynchon, Brautigan, Thompson, and Kesey — still shine over the ragged, rutted-out roads of the American Dream.

Yet, one brilliant star of this latest explosion of new American writers burned out in a brilliant flash, barely noticed by the rest of the illuminati. This real-gone star’s name was Richard Farina, and he was as Beat as Beat would ever be. Farina’s only claim to fame, Been Down so Long It Looks Like Up to Me was in many ways the 60’s complement to the rollicking, wide open classic On the Road. If On the Road was a careening, pedal-to-the-metal sort of hopped-up, amphetamine driven travelogue through a burned out Freudian landscape, Been Down So Long was a stroll through a Jungian meadow where Farina’s archetypes asked deep, pot-inspired philosophical questions of life and love and raged against the machine.

Young Gnossos Popadoppoulis, furry Pooh Bear, keeper of the flame, voyaged back from the asphalt seas of the great wasted land: oh highways U.S. 40 and unyielding 66, I am home … See me loud with lies, big boots stomping, mind awash with schemes.

So begins the epic travels of the central character in this gonzo-esque account of Gnossos Poppadopoulis, clearly a projection of Farina’s alter ego. The novel is an episodic account of Gnossos’s return from a long-wandering, backpacking journey to a Midwestern college where he was occasionally enrolled. But first, he must find a place to rest his road weary bones. Thus the story opens with Gnossos creatively regaling his potential landlady with an impromptu pseudonym who ad-libs on his experiences as the heroic adventurer — a central theme repeated throughout the novel.

“You came about the flat?”

British. Murderess of Cypriot peasants; innate antagonist. Be careful. Lie: “My name is Ian Evergood, miss, you’re quite correct. Could I have a look?” … “Been on a bit of a hunting trip,. The Adirondacks. You’ll have to forgive my appearance” … “There was a wolf, you see. A marauding bear.” … “Quartered three children before I got him. Ghastly business. Made a topping shot, though.”

Set in the late 1950’s-but not published until 1966-this sprawling, colorful, richly textured, if not terribly disciplined, novel takes the reader on a raucous, ribald trip on a day-glo painted highway that runs from the American West to the northeastern coast, then down Cuba way- – back when Cuba was still The Great American Island Casino. Been Down is full-tilt hippie paean in the noblest sense of the word. And though it does on occasion admittedly feel like the reader is peeking in on Farina’s psychotherapy, his novel succeeds in painting an impressionist portrait of a culture in flux with characters (whom Kerouac would have appreciated) like Fitzgore and Heffalump, Monsignor Putti, Blacknesse and the Rajamattus from India, all of them in perpetual party mode fueled by a wide variety of booze, mescaline, the ubiquitous Cannabis, and of course the Paregoric Pall Mall. In the following scene, Gnossos, in desperate need of food, finds himself at a fraternity pledge supper-unable to resist a couple of hits from the paregoric Pall Mall:

(NOTE: paregoric: Greek origin, meaning a camphorated tincture of opium, taken internally for the relief of diarrhea and intestinal pain.)

Poppadopoulis picking up the steak in his hands and tearing away a huge chunk with his incisors.

His shoulders hunched, his eyes bulging, the house officers beginning to mumble uneasily, someone coming over to talk to Fitzgore, report me. Exhale. Beautiful, no smoke. Another puff, almost gone. Fitzgore sniffing.

No time to talk. Saturate lungs. All that spongy fiber swilling. Listen to your nerves hum. Yes. Oh yes.

“Shazam.” He was up on the table making a noise like a thunderclap, then with a bound into the middle of the living room, pointing a finger at Harold Wong.

Great writers, like giant oak trees, cast long shadows over the Great American Highway. And it was on that dappled road that Farina met his “dead end” fate.

He never quite emerged, after his sudden death, into the sunlight of renown. With the sort of life irony befitting an aspiring, almost famous author, Farina died on a beautiful stretch of highway named Carmel Valley Road on April 30th, 1966 while celebrating the publication of Been Down So Long It Looks Like Up To Me. It was his wife Mimi’s birthday when the road called to him one last time for one last ride. So he hitched a ride on the back of a friend’s motorcycle. Less than a mile down the road, the driver took a mountainous curve at ninety miles an hour. The motorcycle was destroyed, the driver lived … and Farina died.

And a young, talented star winked out for good.