Sometimes a Great Novel: A Look Back at Ken Kesey’s Second Book 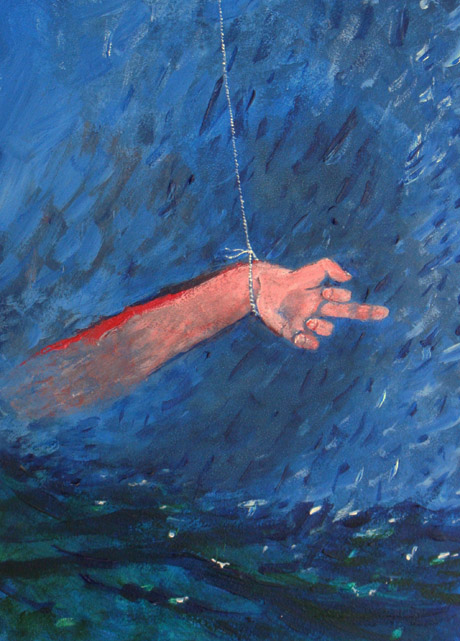 First, we are transported to the Oregon Coast:

Along the western slopes of the Oregon Coastal Range … come look: the hysterical crashing of tributaries as they merge into the Wakonda Auga River …

The first little washes flashing like thick rushing winds through sheep sorrel and clover, ghost fern and nettle, sheering, cutting … forming branches. Then, through bearberry and salmonberry, blueberry and blackberry, the branches crashing into creek, into streams. Finally, in the foothills, through tamarack and sugar pine, shittim bark and silver spruce — and the green and blue mosaic of Douglas fir — the actual river falls 500 feet … and look: opens out upon the fields.”

Then, we notice that a human arm is dangling over the river:

Twisting and stopping and slowly untwisting in the gusting rain, eight or ten feet above the flood’s current, a human arm, tied at the wrist (just the arm; look) disappearing downward at the frayed shoulder where an invisible dancer performs twisting pirouettes for an enthralled audience (just the arm, turning there, above the water)…” [The human arm is also flipping the bird to the enraged union men on the other shore].

And from the very beginning of Sometimes a Great Notion

, Ken Kesey’s second novel and eagerly-awaited follow-up to his acclaimed One Flew Over The Cuckoo’s Nest, we are hooked.

The sense of foreboding is set from the beginning and never lets up.

Someone is going to lose an arm, or worse, but we keep reading, sometimes afraid of what is going to happen, but unable to stop. The story builds relentlessly from its initial image.

This story of a fight between striking loggers and an independent family logging business takes on mythic dimensions. Kesey pulls out all the stops in this novel:

Shifting the action of the story to a completely different character as well as a different locality in just a short piece of dialogue.

Getting into the mind of the whole town of Wakonda, Oregon (where the main action takes place): the dialogue and internal monologue of everyone from Hank Stamper to the dog Molly is revealed and woven seamlessly into the story.

Following from an identifiable beginning to an end, the narrative nevertheless jumps forward and backward in time, leaving clues such as letters and a photo album which eventually reveal crucial facts later in the novel. The point of view changes from character to character, switching between first person as well as third person narrative.

Kesey captures the Oregon loggers and the townspeople of his fictional town of Wakonda with the same brilliance that Faulkner captured the people of Yoknapatawpha County. Kesey has a remarkable ear for dialogue and relates the tall tales and anecdotes of his characters such that we feel like we are silent members of the community, sitting around the Stamper kitchen table or in a corner table at the Snag, the town watering hole.

Equally brilliant is the portrayal of his main (as well as secondary) characters. Hank and Lee Stamper, the protagonists, are brothers locked in a constant battle of sibling rivalry with psycho-sexual underpinnings.

Hank Stamper is absolutely fearless. Blessed with the body of an athlete and backed by the Stamper motto “Never Give a Inch”, he is the driving force behind the Stamper family logging business. He is also smart, which sets him apart from the rough and sometimes brutish loggers of the union, with whom he is locked in a war because he is going to fill a contract with the Wakonda Pacific lumber mill, despite the fact that the union loggers are on strike. The Stampers hire only family members to work in their logging operation, so that they don’t have to deal with the union.

Leland Stamper (Lee), is Hank’s polar opposite. Hank and Lee share the same father, Old Henry Stamper, who built the logging business that Hank now runs. Old Henry married a young woman from the East after his first wife (and Hank’s mother) died. The new wife, Lee’s mother, did not want Lee to grow up to be a logger. As Lee is very good in school, she moves (without Henry) back East with him, where he eventually goes to Yale and then on to graduate school. His intellectual nature stands in contrast to Hank’s native cunning. He is deathly afraid of conflict, of fighting, whereas Hank is always ready to mix it up.

Their natural sibling rivalry is intensified by the fact that Hank slept with Lee’s mother numerous times before she left for the East, and Lee saw them through a hole in his bedroom wall. The guilt that both men feel over this fact is compounded by the later suicide of Lee’s mother.

When Lee returns to Oregon to help out the logging operation, he attempts to get revenge on Hank by sleeping with Hank’s wife, Viv.

Lee’s revenge on Hank by sleeping with Viv is not enough. Lee’s eventual fistfight with Hank is not enough revenge for either of them. Their rivalry is of such epic proportions that it requires that both men change to be rid of it: Lee to stop running away from physical challenges and Hank to use more than his muscle to solve problems. At the end of the novel, both men wrestling the quota of logs down a flood swollen river may prove to put an end to the rivalry. Or at least fight it to a draw. Or end both of their lives.

In between the story of a logging enterprise are explorations of a great number of themes. There is the theme of collectivism over individual effort; the plight of the Native American (represented by the character Indian Jenney); and the way that man lives in an uneasy coexistence with nature. One of the main characters of the novel is the Wakonda Auga River. This river supplies the highway by which the Stampers travel to their log camp, as well as the route by which they ship their logs to the mill for finishing. But the river is also malevolent, taking land from the Stampers and the other townspeople. It undercuts the banks, changes course, and washes away whole houses. Hank Stamper and his father before him have lived in constant battle with the river. Every night they hammer boards and affix chains in a continuous effort to prevent the Stamper house from being washed away to the sea. Never Give a Inch!

After the publication of Sometimes a Great Notion, Kesey’s literary efforts fell off for a number of years. The 1964 trip to New York in the Further bus to celebrate the publication of Notion and also visit the World’s Fair took Kesey’s Prankster sideshow on the road, and this period of frenetic energy followed by his exile to Mexico on drug charges left little time for serious writing. In an interview with the Paris Review in conducted in 1992 and 1993, Kesey said of Sometimes a Great Notion:

“It’s my best work, and I’ll never write anything that good again. It’s a question of time spent on it. I worked on Notion for two years without interruption, exploring symbols and characters and letting the narrative take its own way.”

It can also be said that Kesey’s life became his art. After Notion he gravitated more to public performances, often in collaboration with various Pranksters. The spontaneous creation of art through theatre and music had a great appeal for him.

He did publish other works after Sometimes a Great Notion, but nothing of the same caliber. But anyone who has added Great Novelist, pioneering counterculture icon, and friend of Neal Cassady to his list of life accomplishments can be said to be a true artist of the highest order. He proved that art, literature and ideas can come in the form of the solitary composition of a work of literature, or in the form of a [sychedelic bus crossing the country, blasting the new music, and taking the new reality to the masses. Ken Kesey was resolutely anti-establishment until the end of his days.

I met Ken Kesey at a book signing in 1993, and he signed my battered copy of Sometimes a Great Notion, which I consider to be one of the best American Novels, along with Moby Dick and On The Road. Kesey struck me not so much as a countercultural icon, but as an archetype of the Old West: his still-powerful frame from his wrestling days, his calloused hands from hard work on his farm, and his sideburns. The sideburns and the jut of his jaw – suggesting that he was, in fact, Hank Stamper.