Six Degrees of Stupid (and Other Literary Oscar Notes) 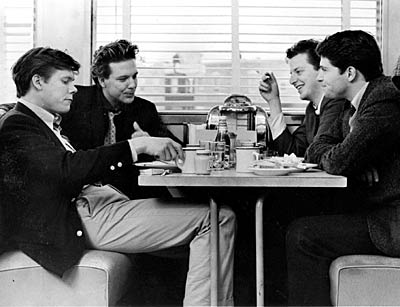 1. Watching the Oscars on TV with Caryn last night, I felt a strange reverberation as the awards for Best Adapted Screenplay were listed. Slumdog Millionaire, it turned out, was based on a novel called Q & A by an author named Vikas Swarup, and something told me I had mentioned this novel years ago when reviewing the New York Times Book Review.

Indeed I had, very briefly, way back in 2005: “I’ll start with the good parts: a truly interesting article about Edmund Wilson; notices of Naphtalene, an epic novel of Baghdad by Alia Mamdouh, and Q & A, a picaresque yarn by Vikas Swarup that begins with an Indian game show called ‘Who Will Win A Billion?’.”

Most of this old post is taken up by a rant about a bad essay by Rachel Donadio, which also brings back memories, and even though I intended to follow up by checking out the novel by Vikas Swarup, I never did. I am looking forward to seeing Slumdog Millionaire, though, and that’s certainly a better title than Q & A, which can still be found here.

2. I was rooting for Mickey Rourke to win Best Actor, since he was in at least three movies I liked a lot: the chilling Angel Heart, the lovely Barfly and, best of all, one of my favorite comedies of all time, Barry Levinson’s Diner. Diner was a popular movie in its time, but I fear it’s dropped from visibility. Caryn hasn’t seen it, and reacted with some skepticism when I told her it was not only one of the best Mickey Rourke movies but also the best Kevin Bacon movie, the best Steve Guttenberg movie (well, yeah), the best Daniel Stern movie, the best Ellen Barkin movie and (even though he only had a minor role) the best Paul Reiser movie ever made.

This reminded me of a run-in I had with a young movie buff at a Manhattan poker club several months ago. It’s customary for poker players to chatter it up during the dull moments when the dealers wash cards or count chips, and sometimes the chatterers get carried away. This raw post-adolescent prided himself on his ability to play “Six Degrees of Kevin Bacon”, and in between each hand he invited other players to name a movie star so he could connect that movie star to Kevin Bacon. “Al Pacino”, one of our tablemates would say.

The young man would think a moment: “Okay. Al Pacino was in The Godfather Part II with Robert DeNiro. DeNiro was in Sleepers with Kevin Bacon.”

I was annoyed by this guy, first because I just wanted him to shut up, and also because I was struck by his literal understanding of the game “Six Degrees of Kevin Bacon”. To make the game interesting over long periods of time, I thought, one might want to stretch beyond Kevin Bacon and attempt to connect any two actors together. If the title is taken literally, the game gets old very fast. Still, I was taken aback when some jokester named Macaulay Culkin and the young expert stalled for several moments.

Finally I piped up. “Diner. Macaulay Culkin was in Home Alone with Daniel Stern, and Daniel Stern was in Diner.”

He looked at me like I was a clueless old loser who didn’t get the game. “Nahh, man,” he said. “It’s about Kevin Bacon. You have to name movies Kevin Bacon was in.”

“Kevin Bacon was in Diner,” I sputtered. Not a single person at the table knew what I was talking about.

I don’t know why Diner seems to have fallen off the face of the earth, if indeed it has, or maybe this was just one warped group of poker players. But if you haven’t seen this gentle comedy about a gang of young men in Baltimore during the early 1960s, I hope you’ll check it out. It really is a wonderful film.

3. Finally, it was nice that The Curious Case of Benjamin Button won a couple of minor awards, and it was nice that these award-winners had a chance to thank everybody they’d apparently ever worked with in their acceptance speeches.

But, couldn’t somebody have maybe thanked F. Scott Fitzgerald? I guess that’s too much to ask.