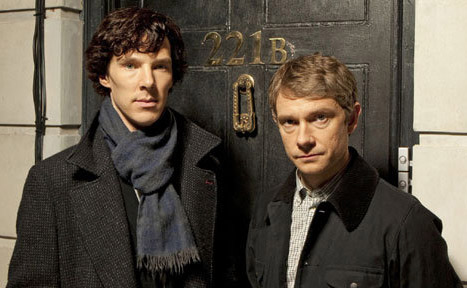 (Longtime friend of Litkicks Kelly Nagle and her daughter Allyson are so enthusiastic about a new series based on Arthur Conan Doyle’s classic detective stories that we’re running here, for the first time, an article written by a mother-daughter team. Kelly is a librarian in Tampa, Florida, and Allyson is a college student. — Levi)

Sherlock, the popular BBC series starting this week on PBS, is brilliant, witty, a must-see. It’s set in present day London. Sherlock is a little younger than usual – about twenty-something – totally uncivilized and pure genius. He’s also a self-admitted sociopath (not a psychopath, as some would have it). Watson, back from the war in Afghanistan, natch, becomes his flatmate and keeper. The rest of the favorite Holmesian characters are here: Mycroft, Mrs. Hudson (Favorite line: “I’m not your housekeeper, dear”), Inspector Lestrade and possibly even Moriarty.

There are clever references back to the original stories. In the first episode, A Study in Pink, Holmes deduces Watson’s relationship with his sibling by studying Watson’s cellphone, where as in the original A Study in Scarlet he studied Watson’s pocketwatch. Which leads to this exchange:

Right then and there, you know they’re perfect for each other.

Modern technology comes into play. Watson blogs about their adventures. Holmes uses the latest forensic techniques, a smartphone and various computers to get his precious data, and sends Watson text messages instead of telegrams when he needs him.

You get to watch Sherlock’s amazing deductive process play out right there on the screen, through words and pictures describing what he’s seeing that everyone else misses. And his gleeful excitement at the prospect of a serial killer is positively catching.

The show is stylish, fast-moving and tons of fun. It was already a big hit in England, earning Benedict Cumberpatch (who plays Holmes) many groupies and causing sales to rise for coats and scarves similar to what Holmes wears. If the PBS broadcast is your first chance to see the BBC show, don’t miss it.

And after you watch it, you can check out Watson’s blog and Sherlock’s website. courtesy of the BBC. (Contains some spoilers.)