I was planning on writing a brilliant article tonight, and I figured I’d have plenty of time to write it after taking my daughter to the Mets game against the Arizona Diamondbacks. Well, the game started a half hour late due to an earlier rainstorm, and then just after the Mets took a 4-1 lead in the second inning I felt a drop of water on my arm, looked up and saw what looked like an ocean-size bucket of rain aiming for all our heads. Abby and I ran for cover, along with the rest of Shea Stadium, and waited out the delay before returning to our wet seats for a teetering, crazy game that ended in a classic Mets-style ninth inning come-from-behind (Endy Chavez got on base, Jose Reyes got a huge hit, Paul LoDuca advanced Reyes to third, and Wright knocked Reyes home for the game-winning RBI).

So, I’m now too exhausted to post anything literary, but here are a couple of cellphone photos. I have no idea why Abby is eating the bag of Cracker Jacks instead of the contents. And that’s the Cowbell Man, a local legend, in the last photo. 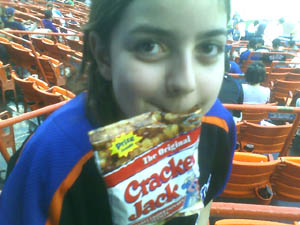 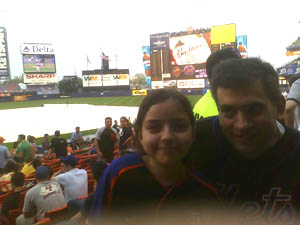 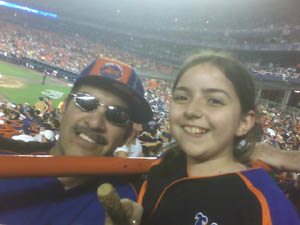