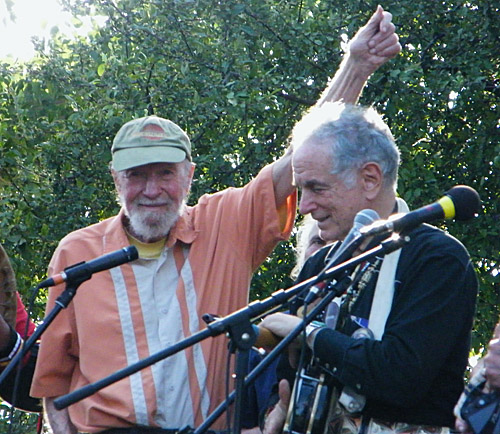 After Pete Seeger died last week, I remembered that the last glimpse I’d had of the great folksinger was a video of his Broadway march in support of Occupy Wall Street in October 2011, with his friends Arlo Guthrie and David Amram in tow. Here’s what that looked like:

Remembering that my friend David Amram was Pete’s close friend and neighbor in New York’s Hudson River Valley, I thought of asking David if he had any thoughts to share. He did:

Pete was in a class of his own and such a modest and committed person that he set the bar for all of us for how to act and interact with anybody and everybody!!

Having known him since 1948 (66 years!!!) I kept thinking of what Theo Bikel said when i played for his 85th birthday party in NYC.

“Ladies and gentlemen. some of you have expressed concern about my health and welfare since I am now 85. Just remember … not to worry … because in the theater, no one ever dies. We just go on tour!!!”

So Pete’s still out there on that road!!!

Pete was a great person and has left us all a better world by all that he did and the inspiration he engendered in all of us to do something of value for others while we are here.

It is not often that many 83-year-olds like myself have the chance to have someone older than themselves to look up to and to spend time with, as well to as collaborate with musically. Now I won’t have a chance to play with Pete Seeger any more but i will still continue to look up to him every day of my life.

I first heard Pete 65 years ago when my mother took me to a Henry Wallace rally in 1948 when I was about to turn 18.

All the hundreds of times I have played with him over the years since then have always been a joy as well as an honor,

Ever since he chose his path, he has stayed on it and walked the walk he talked and inspired generations to raise our voices in song, to always think of others, to respect ourselves and all who cross our paths and to share whatever blessings we have with others.

He shared his incredible gifts as an artist with anybody and everybody and set an example to all musicians of what our job is all about … to make a contribution while we are here, to honor young people and to show love and exercise responsibility to our blessed planet earth.

I was fortunate enough to be able to say goodbye to him during the last two hours of his life. As Guy Davis, Pat Humphries and I played some music for him and his family in his hospital room, we could feel his spirit fill our hearts with that endless energy he shared with the world for 94 years.

Now he is gone. We all have to honor his memory, his music and his ideals of bringing the world together the way he brought people together with the power of song.

We must all think of his beautiful family and send them a prayer and offer love in anyway that we can.

His voice will remain in the hearts of the millions who have heard him.

It was a blessing to know him.