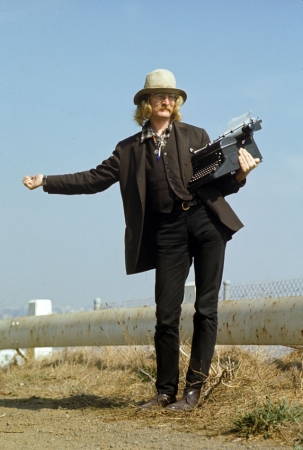 Richard Brautigan grew up in the Pacific Northwest, the same richly wooded territory that later produced David Lynch, Matt Groening and Kurt Cobain. Brautigan, who fits like a glove into the region’s pantheon of weird brilliance, was born on January 30, 1935 in Tacoma, Washington.

His mother moved the family to a shack in Eugene, Oregon, where Brautigan spent his childhood. The utter poverty of his “white-trash” upbringing seems to have affected him deeply. Many who knew him later in life noticed that he he never spoke the names of any family members or anybody else he knew as a child.

Hunger was a constant presence as he grew up. At the age of 20 he was arrested for throwing a rock through a window inside a police station. He explained that he wanted to go to jail so he could eat. Instead he was sent to Oregon State Hospital, coincidentally the same hospital where the movie version of Ken Kesey‘s One Flew Over The Cuckoo’s Nest would later be filmed. Brautigan was treated with electroshock therapy in this hospital.

He moved to San Francisco, married a woman named Virginia Adler in 1957, and managed to publish a slim book of poetry, Lay The Marble Tea, in 1959. Their daughter, Ianthe Elizabeth Brautigan, was born in 1960. The marriage broke up soon after. Brautigan wrote intensely during these years, cultivating friendships with Beat writers and other San Francisco-based poets. His first novel, A Confederate General in Big Sur, was published in 1965.

He became famous for his 1967 classic, “Trout Fishing In America”, a deeply odd book that is guaranteed to surprise anybody who reads it today. (For some thoughts on the significance of trout in Brautigan’s work, click here).

He become an integral part of the mid-60’s San Francisco scene, reading poetry at psychedelic rock concerts and helping to produce underground newspapers with activist groups like the Diggers. He had a great hippie look, with long blond hair and thoughtful granny glasses. His back was oddly bent due to the back condition known as scoliosis.

Some writers evolve their voices over time, but Brautigan established one signature style that barely wavered at any point during his career. His books usually featured stark black and white cover photos of hippies in victorian clothing (usually Brautigan with one or more of his girlfriends) gazing ironically back at the camera. His writing was as minimalistic as these photos.

His prose would sometimes lurch fowards in wacky, surreal anecdotes, or in wide-ranging observations and similes that crashed into each other with jarring incongruity. Other times, his prose was simple and country-plain. He liked to stitch novels together out of short, paragraph-length chapters that slipped back and forth between sudden expressions of emotional complexity and remarkably simple depictions of everyday life. Here is a sentence from a later Brautigan book showing how he would typically introduce a character:

When I first met Vida she had been born inside the wrong body and was barely able to look at people, wanting to crawl off and hide from the thing that she was contained within.

Certain types of objects — planks, trouts, rivers — popped up repeatedly in his writings. His stories were also full of strange transformations: nouns would become verbs, people would become ideas, book titles would become characters. Here is a passage from Trout Fishing In America, describing a boy in Portland, Oregon who yearns to go trout fishing for the first time and thinks he has finally found a creek in his town:

The next morning I got up early and ate my breakfast. I took a slice of white bread to use for bait. I planned on making doughballs from the soft center of the bread and putting them on my vaudevilliean hook. I left the place and walked down to the different street corner. How beautiful the field looked and the creek that came pouring down in a waterfall off the hill.

But as I got closer to the creek I could see that something was wrong. The creek did not act right. There was a strangeness to it. There was a thing about its motion that was wrong. Finally I got close enough to see what the trouble was. The waterfall was just a flight of white wooden stairs leading up to a house in the trees. I stood there for a long time, looking up and looking down, following the stairs with my eyes, having trouble believing. Then I knocked on my creek and heard the sound of wood.I ended up by being my own trout and eating the slice of bread myself.

The reply of Trout Fishing In America:

There was nothing I could do. I couldn’t change a flight of stairs into a creek. The boy walked back to where he came from. The same thing once happened to me. I remember mistaking on old woman for a trout stream in Vermont, and I had to beg her pardon.
“Excuse me,” I said. “I thought you were a trout stream.”

This surrealism borders on comedy (which certainly helped his popularity during the 1960s). But he also creates characters that feel resonant, real. His stories usually manage to construct some kind of tangible meaning by the time they are done. My favorite Brautigan book is In Watermelon Sugar, an extremely strange narrative about life in a beautiful commune called iDEATH, where people with names like Bill, Charley and Pauline fall in love, cook dinners and press watermelons into sugar, planks and lamp oil.

But then a disgruntled former member of the commune joins forces with a several others, including a woman who has been romantically spurned by the narrator, and this dispute suddenly explodes in a surreal episode of sick violence. The war is over as suddenly as it had began, and eventually the gentle, peaceful lifestyle is again restored.

The story is both incomprehensible and stunningly real. Like many Brautigan novels it is naked of literary pretense or ornamental prose. It also has the confidence to be remarkably short; I read the entire book one night on a subway ride home from work. Other readers have been similarly moved.

Years before Abbie Hoffman asked readers to steal his book, Brautigan printed a book on a seed packet and called it Please Plant This Book.

He also wrote much poetry. A prescient poem called ‘All Watched Over By Machines of Loving Grace’ may be his most well-known work of verse.

Brautigan was well-liked by his friends and broadly popular with young readers during the hippie era, but he also seemed to be deeply unhappy with himself. As his fame waned (he was for a few years a popular favorite, but never accepted by the literary critical establishment), he began grasping for ways to reinvent his writing career, but none succeeded. He also began drinking heavily, always preferring alcohol to marijuana or drugs. He had two homes, one in Bolinas in Marin County, California, and one in a remote area in Montana, north of Yellowstone Park, where he socialized with other hip novelists of the time like Tom McGuane and Jim Harrison.

But McGuane and Harrison were rising stars in the 70s, while Brautigan watched his audience slip away (especially in the United States, though he was respected around the world and had an especially devoted readership in Japan). His drinking became much worse, his personality worsened as well, and he developed an unhealthy affection for guns.

He continued to publish novels throughout the 70s and early 80’s. He married a Japanese woman named Akiko Yoshimura and wrote about his Japanese connection in a book called The Tokyo-Montana Express. His last novel, So The Wind Won’t Blow It Away was an odd fable about a poor young boy who contemplates whether to spend his pocketful of money on bullets for his rifle or on a hamburger. He buys the bullets and accidentally shoots and kills a young friend. Much of the book is about the fact that he wishes he had bought the hamburger instead.

This book was published in 1982. Two years later, Brautigan shot himself to death in his second home in Bolinas, California. The body was not found until many weeks later, on October 25, 1984.

His daughter Ianthe published a book about her relationship with her father, You Can’t Catch Death, in 2000. She described with affection the odd years she had spent visiting her father in his various homes, and also told of many frightening suicidal alcoholic incidents before the final death. She ends this touching book with a visit to the grandmother she never knew, her father’s mother, who still lived in near poverty in one of the houses where Richard had grown up. This old lady turns out to have the same unmistakably caustic but affectionate wit that could only be called Brautiganesque.

Brautigan’s daughter’s book does not try to explain his death but rather encircles it sneakily in a classic Brautigan style. She reprints a photo of a bullet-ridden wall in Montana where Brautigan and a girlfriend once massacred a clock.

Richard Brautigan’s sad death remains inexplicable, and points to hidden meanings even beyond those found in his books. I could put on a Brautigan deadpan myself and say “a great writer decided to transform himself into a dead body.”