A Writer Returns to Romania 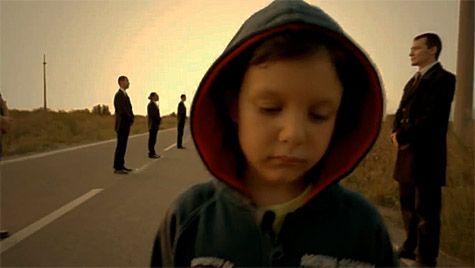 Returning to Romania, my native country after 30 years, made me feel like Rip Van Winkle. I didn’t fall asleep for that many years, but I did fall out of touch with my native country — and Eastern Europe in general — as I was focusing on my personal and professional life in the United States. My memories of my native country didn’t fade, however. I kept them alive through my fiction, the novel Velvet Totalitarianism

that I’ve already written about on Litkicks, and that has just been republished in Romanian translation as Between Two Worlds (Intre Doua Lumi). The image of Romania in my head was also somewhat faded: a kind of black and white — or gray, more like it — snapshot of the communist country my family fled from in 1981. I described this dire image as vividly as I could in my novel:

While Eva waited for the pietoni (pedestrians/walk) sign to turn green, her eyes couldn’t help but focus on the poster of General Secretary Nicolae Ceausescu directly facing her. The dictator’s face was frozen into the larger-than-life image he wanted to convey: his hair was still dark, glossy and youthful; his brown eyes sparkled with a reassuring warmth; his sensual mouth smiled with compassion; his aquiline, Roman nose took away some of the face’s natural beauty but gave it an air of authority. Eva thought how different this man was, and his benevolent image, from the day-to-day reality facing most Romanians. She turned away her gaze with disgust, yet found no consolation in her immediate surroundings. That winter evening, everything looked gray—the streets, the dingy buildings, the people scurrying about. Even the falling snow couldn’t add a glimmer of beauty to the gloomy atmosphere. Disoriented snowflakes fell helplessly onto the ground and disappeared without a trace into the pavement. What a pity, Eva whispered to herself, thinking that during the past few years, Bucharest in the evening had become a depressing sight. The formerly lively capital, filled with dazzling lights, picturesque cobblestone streets, Napoleonic-style buildings and its very own version of L’arc de triomphe (Arcul de Triumf) looked anything but triumphant now.


I can say with confidence that the Bucharest I found now, thirty years later, did look triumphant, very much like “the little Paris” it’s reputed to be. Or, actually, not so little since if one counts the suburbs Bucharest has grown to a population of 2.3 million people. I arrived in the city during the George Enescu Festival (an international concert series), which lit up the downtown and gathered enormous crowds of classical music lovers. But even during the day, I could hardly recognize this westernized post-Stalinist Bucharest, bustling with elegant people, lit up by international banners (Pepsi, Levi’s, Mercedes, etc) and replete with gorgeous mansions built in the Haussmann style of Napoleonic architecture.

The only reason I wasn’t shocked by the vast difference between my somber memories of communist Romania and this new, westernized Romania is that I had made a connection between these two worlds via the LinkedIn social networking site. Even before my visit, I was in touch about the launch of my novel with editors and journalists from Forbes.ro, Elle.ro and several other international magazines and journals that have established branches in Romania. With this new internationalization of the media, also comes a standardization of the high standards for conducting interviews, writing articles, incorporating images, etc. All this, of course, doesn’t have to imply a homogenization of culture, just the quality control of standards, which overall I found to be a positive development. In some respects, I found the Romanian publishing industry to be ahead of the curve as far as multimedia launches go. I was impressed with the fact that my publisher, Curtea Veche Publishing, incorporated at the launch not only a book trailer but also a music video by the composer and director Andy Platon, called Velvet Love, which were based on the plot of my novel.

The main visual difference I noticed during my brief visit was also positive. I was struck by how busy and bustling Bucharest (like other European cities) was at all hours of the day and evening, filled with cafes, concerts and cultural activities. I was equally impressed by the spectacular beauty of the city itself, which has been recently renovated but includes row after row, and street after street, of gorgeous nineteenth-century mansions of the former Romanian aristocracy. (For anyone interested in going on vacation to Bucharest, I’d strongly recommend it!) Moreover, I noticed a different attitude not only from the previous Communist era, but also from the United States: people in Bucharest seem to devote a lot of time to cultural “leisure” activities that most Americans don’t have as much time for or don’t prioritize as much. Of course, if I were to compare cultural life in Bucharest with cultural life in New York, it would be comparable, but I’d still maintain that Romanians, and Europeans in general, seem to enjoy more leisure time, and thus have more time to take advantage of cultural activities.

They say that when you travel somewhere as a tourist, it’s very easy to become enchanted with the place and not notice its flaws. That’s no doubt true. During my visit to Romania, I was not only a tourist, but also an author on a book launch, so I had the privilege of speaking with many media personnel, cultural figures, artists and intellectuals. I’m sure that if I actually lived in the country for an extended period of time, I’d notice more of the downsides, including the economic problems and the political corruption that many Romanians talk about and that impacts their daily lives.

In fact, I discussed these issues briefly with some of the journalists who interviewed me. What became obvious from these conversations is that the issue of political and economic corruption can impact the foreign investment that Romania — like all the countries from the former Eastern Europe — needs to flourish. One of the journalists in particular, who works for a very reputable international magazine, told me that he has interviewed my publisher (Curtea Veche Publishing) because it is a publishing house that is extremely professional, punctual, reliable and abides by international standards. There is a sense of being fashionably late in Romania and of cutting it rather close to deadlines. I suppose it could be called a laissez-faire attitude that still prevails.

However, as Romania develops an increasingly successful capitalist economy, I hope that another version of laissez-faire, tied to professionalism and the work ethic, continues to emerge. If I were to sum up my visit in one phrase, I’d say that thirty years ago I left a Romania that was clearly a part of Eastern Europe, only to return to a Romania that is part of the new Europe, pure and simple. There is no more sense of being caught between East and West, or “between two worlds” as the title of my novel in Romanian implies. The Romania of today is integrated into Europe and I hope that this process of internationalization continues in the country without losing, however, its distinct cultural identity which I, like so many other Romanian intellectuals, appreciate and love.