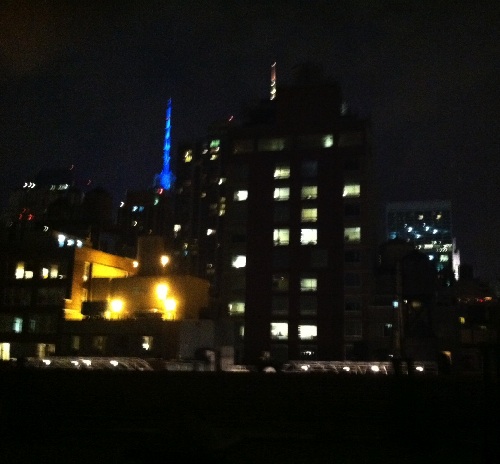 It’s great that Edward Snowden got us all talking about privacy. But are we saying intelligent things about it yet?

The most common reaction to revelations of federal invasions of individual privacy is to visualize a federal government as an “other” looking at “us”. But of course most of us who live in democratic nations elect, empower and embody our governments, and are therefore spying on ourselves. And few citizens of democratic governments today seem willing to bear the results of not spying on ourselves.

If there were a referendum in the United States of America right now for a potential law to prohibit government surveillance designed to prevent terrorist attacks, it would probably be rejected by voters who do not wish to allow that level of risk. The “other” that supports USA federal surveillance is not a remote body of power-hungry elites in Washington DC — it is us, the voting public.

Privacy: what is it, and when have we ever had it? I happened to be on the roof of a midtown Manhattan building as I began writing this Philosophy Weekend blog post, and I took the photo on this page to show how many windows I was able to peer into from this position. This kind of privacy invasion is a fact of life in any populated area. It doesn’t bother me very much that I am constantly being looked at by strangers, whether I want to be or not. It does bother me, on the other hand, when I get a speeding ticket mailed to me from a remote robotic camera that observed my license plate and traced my identity, but this only seems to demonstrate that we tend to dislike privacy invasions when they happen to us, but forgive them when they don’t.

As I’ve written here before, my past work as a software developer in the legal field has given me a glimpse of a horrifying potential invasion of privacy that can be inflicted on any American citizen who is accused of a crime. Once subpoenas arrive, privacy is a forgotten dream, and many innocent people have been harmed by embarrassing disclosures that occurred incidentally from criminal investigations. This invasion of personal ownership can happen not only to those who have committed crimes but also to those merely suspected of crimes, or even those obviously innocent persons who may hold information relevant to another person’s crime. Franz Kafka was plugged into this kind of outrage when he wrote The Trial, though readers of Kafka today like to pretend that the society he was depicting was less enlightened than our own. It’s really not clear that much progress has made between the era of The Trial and today.

I’ve made a different point about privacy here before that I want to emphasize even more strongly, because this truth has not been reflected in the public dialogue about federal privacy policy, and it needs to be. I’m talking about the fact that privacy is incompatible with militarism. As long as the United States of America pursues an aggressive, muscle-bound foreign policy, we will need to match our offense with defense, and we will need to invade the privacy of citizens and foreigners in order to maintain our security. It’s hard to imagine what “individual privacy” can even mean, in real terms, within a nation that is currently flying deadly drone aircrafts over Afghanistan and Pakistan, targeting individual citizens and small gatherings on the grounds of these countries for personalized missile bombings from the air. Privacy? We must be flattering ourselves to even use the word while this is going on.

Of course, we shouldn’t stop using the word “privacy”, and we shouldn’t stop aspiring to achieve it. But we should stop kidding ourselves about what real privacy requires. It requires a state of harmony and justice in the world. There is really no other way — the more peace we can achieve, the more privacy we can achieve. Whenever we are actively threatened by powerful enemies, visible or invisible, foreign or domestic, we will continue to invade the privacy of others and of ourselves to defend against these threats.

This is an uncomfortable truth — and like most uncomfortable truths, we will suffer until we discover the wisdom to face it. If we want privacy — and we do want privacy! — we must find a way improve our society, and the society of our entire planet, in order to earn it. That’s a goal worth pursuing. It doesn’t make much sense to demand privacy in a shrill voice, and to stand perpetually outraged at the fact that the demand cannot be met. It makes more sense to ask ourselves how we can live up to the meaning of the word, and to begin trying to do so.