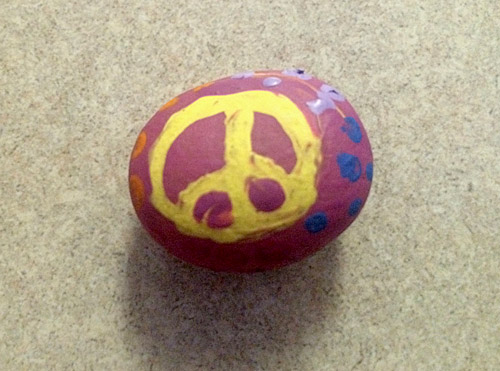 Our new Indiegogo project for Pacifism21.org has given me the opportunity to hear from many people who, it turns out, have widely diverse ideas about what the word “pacifism” means.

Some people have explained this to me in apologetic terms: they like me a lot, but they can’t support my project because they have some idea of pacifism as a fanatical or extreme political position, or as an exotic spiritual/mystical belief system. They aren’t donating to support Pacifism21 because they object to either or both of these.

In fact, pacifism is not an extreme position, and requires no spiritual or mystical belief. It rests on a simple and natural equation that can be explained in a few minutes.

The practical case for pacifism is as obvious and as universal as the case for, say, indoor plumbing, or fire departments, or brushing your teeth. It’s true that some small fraction of pacifists might take the position to an impractical extreme. And it’s true that there can be a mystical or spiritual aspect to pacifism, and it’s perfectly understandable that pacifism is often linked to spirituality, since many of the greatest pacifists from Jesus to Tolstoy to Gandhi to Day to King grounded their work in religion. But the basic logic behind the reasonable hope for a future world at peace requires no extremism and no religion at all.

The simple equation is an argument containing two premises and one conclusion. The two premises are very easy to explain and defend, and the conclusion follows neatly from the premises. I hope it will help my fundraising drive to lay out the basic argument here, and to ask each person who reads this whether or not they agree with these premises and this conclusion. Here goes:

The Practical Case for Pacifism

Premise 1: War is a self-perpetuating disease. It might seem like a cliche to describe war as like a cancer, but in fact this metaphor does a great job of explaining the horrors of the last 200 years. One conflict spreads to the next: the Franco-Prussian War led to World War One and then World War Two in western Europe; Russia’s invasion of Afghanistan enabled the rise of Al Qaeda which provoked the US invasion of Iraq. A war almost never emerges from a state of peace, but rather is intended to avenge a previous war (Hitler’s rationale for World War Two) or to prevent a future war (Bush’s rationale for the 2003 invasion of Iraq).

Premise 2: A self-perpetuating disease can be cured. The fact that war seems to act like a cancer is very good news from a clinical point of view. Cancers can be removed. Medical practice shows that lives can be saved when it is possible to fully remove the source and active traces of a cancerous disease.

Conclusion: De-escalation of global conflict has a very good chance of generating a lasting state of world peace. Practical pacifism’s basic program is a systematic application of reasonable compromise and mutual understanding for the purpose of removing the cancer left behind by the horrific wars of recent history. Peace talks, arms reduction treaties and cultural exchanges are all encouraged because they all serve to reduce global tension, and history shows that these methods are generally effective. Military de-escalation is the geopolitical equivalent of isolating and removing cancerous growths from a healthy body.

This is the practical case — perhaps it could even be called the medical case — for pacifism. This is an argument that requires no spiritual belief, no psychological theory of human nature, no adherence to a rigid or extreme philosophy of life. It’s simply an application of common sense to a problem that otherwise threatens to grow until it engulfs and overpowers us all. It seems clear that we have not only an opportunity but a responsibility to do everything we can to move towards a more peaceful world, or we may find the chance to be lost.

Do you consider this a compelling argument? Do you agree with the two premises above, and do you agree that the conclusion follows from the premises?

If you do, I’d like to humbly ask you to get on the bandwagon and donate to our fundraising drive for Pacifism21. This is an ambitious and unique new organization that will carry on the fight and provide a permanent voice for peace-loving people, activists and ethical philosophers all over the world.

Your donation is badly needed, and will really help us get this new organization and social media website off the ground. I’d also like to ask you to help this cause by sharing this post on Facebook or Twitter or anywhere else you hang out, or by sending it personally to friends or relatives who you think might like to get involved.

If you don’t agree with either or both of the two premises above, or if you don’t agree that the conclusion follows from the premises, I urge you to post a comment here (or on Facebook, Twitter, etc.) that explains what you think is wrong with this simple equation for practical pacifism. This may help the cause as much as a donation, because we really want to understand why some people don’t get excited about the opportunities that exist right now for a peace movement on planet Earth, and if you help us understand how you react to our messaging we can do a better job of communicating what our project is really about. Whether you donate or send a response, thanks!