An Unlikely Cocktail: Mixing Pop and Bourbon in the Palace of Versailles 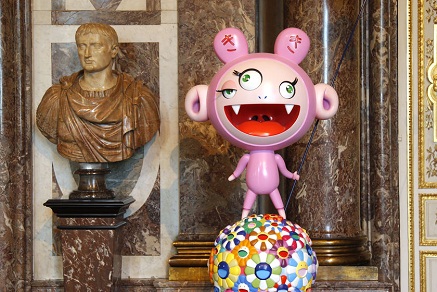 What do you get when you mix France’s Bourbon tradition with Japanese Pop art in the Palace of Versailles? You get the newest scandal in the frequently scandalous world of contemporary art. Takashi Murakami’s exhibition at Versailles has not only stirred up controversy, but also provoked a lawsuit from the Prince Sixte Henri de Bourbon-Parme, a descendent of the Bourbon kings, in the name of “respecting the chateau and its ancestors.” M. de Bourbon-Parme claims that he’s not “against the modernity of art, but against a way of thinking that denatures and does French culture no good.”

Indeed, in some respects Murakami’s brand of pop art—which he calls “superflat”–couldn’t be more glaringly different from the Baroque splendor of Versailles. The palace embodies the triumphant power and control associated with Louis XIV, the Sun King, who instituted Versailles as the seat of French culture and monarchic power. By way of contrast, Murakami’s art couldn’t be more “plebian”. It’s influenced by Japanese comic books, turning pop culture motifs into greater-than-life, colorful and bizarre sculptures. One of Murakami’s most controversial piece, “My Lonesome Cowboy,” features a larger-than-life boy masturbating. This sculpture is absent from the Versailles exhibit. But the odd-looking pink teletubby perched on a globe of flowers (I don’t know how else to describe it) and the blond sexy maid in red high heels stick out like a sore thumb in Versailles’ majestic hallways and spectacular rooms.

Murakami himself attributes the scandal to “a misunderstanding” provoked by jealousy of his international success. Many of his sculptures sell for millions of dollars. In addition, the controversy generated by his art gives him the kind of international media coverage that many artists would have reason to envy. Ultimately, however, Murakami defends his Versailles exhibit in nobler terms, as a “face-off between the Baroque period and postwar Japan.” He hopes that this juxtaposition “will create in visitors a sort of shock, an aesthetic feeling.”

This sense of shock and aesthetic feeling is not altogether new. It reminds us of other notable exhibits which first shocked popular taste, only to be later embraced as the landmarks of Paris. When it was first erected in 1889 The Eiffel Tower caused a stir. Similarly, the Centre Georges Pompidou, which now houses the Museum of Modern Art, was viewed by many as an eyesore in the traditional Beaubourg area of Paris when it opened in 1977. Even I. M. Pei’s spectacular Louvre Pyramid from 1989 was initially met with mixed reviews.

Of course, those who object to Murakami’s exhibit will find some solace in the fact that it will not be a permanent feature of Paris (it only runs from September 14 to December 12, 2010). But the argument the artist makes is similar to those who view the role of modern art as provoking viewers and providing a sharp contrast to past artistic traditions rather than attempting to emulate them or to fit in with their styles. Personally, I think that the contrast between Versailles’ ornate Rococo style and the playfulness of Murakami’s pop sculptures isn’t as striking as it may seem. The flowery and colorful Japanese displays could be viewed as a contemporary version of Rococo’s over-the-top ornamentation.

Yet, in some respects, it’s the traditional context of Murakami’s Versailles exhibit that lends his pop art some element of surprise. I sure wouldn’t be shocked or even mildly surprised to find it in contemporary art galleries or museums! When I step into any contemporary art gallery or museum I expect to find pickled sharks, crap ready-mades (sometimes literally!) and all kinds of post-Warhol pop art. By way of contrast, as I mentioned in my previous essay on the lack of genuine artistic freedom, nothing would shock me more than to find more traditional art—in the Realistic or Romantic traditions—in a Museum of Contemporary Art or discussed in the art section of prominent magazines. Perhaps this is why I’d find surprising, unexpected and refreshing a kind of chiasmic reversal: walking through the traditional splendor of Versailles to pass by Murakami’s comic book sculptures and walking through the “cutting-edge” galleries and museums devoted to contemporary art to discover age-old traditions, a new Romanticism or Realism, rediscovered and renewed by contemporary artists for our times.

If this chiasmic reversal isn’t quite reciprocated, it’s because even though some people may vociferously complain about the newest fad in art, contemporary artists who aim to shock the public are in fact glorified and fetishized by the artistic establishment (by critics, the media and museums of contemporary art), while talented traditional contemporary artists are systematically ignored. Given this inherent bias in the artistic establishment, pretty soon the “cutting-edge” art that’s supposed to shock and stir in us “aesthetic feelings” will be greeted by the public with a big yawn.