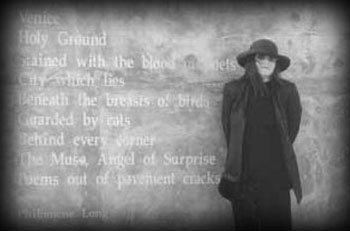 I met Philomene Long last year at a poetry reading at Vox Pop in Brooklyn. I knew of her as a veteran of the Venice Beach, California beat poetry scene and as a filmmaker whose documentary The Beats: An Existential Comedy I once reviewed (favorably) at LitKicks. Onstage at Vox Pop, she had a healthy ferocity that reminded me of Anne Waldman, and a strong artistic/spiritual core that reminded me of Patti Smith.

I talked to her afterwards about the ongoing Los Angeles poetry community, about her memories of her close friend Charles Bukowski, and about her very cherished memories of her husband and fellow Venice Beach scenester/poet John Thomas (with whom she’d co-authored an affectionate portrait of their mutual friend, Bukowski in the Bathtub). I was already captivated by her confident poetic self-assurance, but I became especially fascinated after she revealed an unusual fact: before she became an enthusiastic fellow-traveller with the poets and hippies of Southern California, she had been a Catholic nun.

I had to know more about this, and the poet allowed me to initiate an email interview after she returned home to California. Meet Philomene Long:

Philomene: Beatitude drove me. In Jack Kerouac’s words: “It is because I am Beat, that is, I believe in beatitude and that God so loved the world that he gave his only begotten son to it … Who knows, but that the universe is not one vast sea of compassion actually, the veritable holy honey, beneath all this show of
personality and cruelty?”

I made most of my unique and dramatic life choices before age 8. The first (that I recall) was to sit still.

At age 4: “I will sit!” in a backyard with a woman I called “Miss Aunt Whistle” (because she whistled) and she saying to me: “Sit still, and a small gold bird will come.” I chose to sit so still and for so long until I could see every blade of grass, to sit bone quiet, until finally disappearing into a luminousity. And a small gold bird did come.

Then, at age 7: “I will become a Saint like you, St. Theresa. I WILL BECOME A NUN!”. At age 8, finally after writing my first poem in memoriam to my deceased pet duck (“Remember the Day You Were Just Out of Luck” ), I became a poet.

Levi: What do nuns and poets have in common?

In fact the first vow all nuns take is the vow of poverty. The first “Beatitude” (for nuns as well as all Christians) is: “Blessed are the poor in spirit for theirs is the kingdom of heaven.” John Thomas, my husband, said: “I have Philomene, a pen, a pad, shirt and pants.” If you start wanting more, it fills you up, leading to a poverty of the heart and mind.

Buddhism is the religion of the Beats, but many of the Beat writers were Buddhists without leaving Catholicism. Keroauc said every night before he went to sleep he prayed to Buddha, Christ and Mary. Kenneth Rexroth was both Buddhist and Catholic, and was instrumental in bringing poetry and philosophy of the East to the West. Philip Lamantia returned to the Catholic church. I recall him saying his influence was St. Francis, the saint of poverty.

Levi: And how does Catholicism inform your life today?

As a child my life was informed by the “Little Way” of St. Theresa of Liseiux; as a young adult by the way of St. Francis of Assisi who stripped naked, and vowed poverty.

Levi:As a Catholic, how do you think difficult issues like abortion rights, euthanasia etc. can be resolved in our country?

Philomene: Within Catholicism? Or generally? I firmly believe in separation between church and state. In no way should they overlap. It is the foundation of our country.

As for within Catholicism … it’s an enormously complex institution. Catholicism is not a one cell being, an amoebae, a planarian. It is a complex entity with — although this seems contrary at first glance –a foundation of democracy. At the same time it exercises the divine right of kings.

Within the church there are many divisions. There are Catholics for Free Choice (e.g. pro-abortion rights), and there is the ARCC (“Association for the Rights of Cathoics in the Church”) and the WOC (Women’s Ordination Committee) — as well as Opus Dei, a group that would return the church to medieval times, including the practice of flaggelation.

Personally, I do not speak for any institution. I support Catholics for Free Choice, ARCC, and WOC. As for the center, the Great Heart — a phrase from Thomas Merton runs through my mind: ‘The seemingly boundless source of sanctity within the Catholic Church.”

I am a Zen Catholic. I cannot practice one without the other. Absolutely can not. I believe Kenneth Rexroth was like that. His was a Catholicism of great intellectual depth. For years he studied and wrote about Thomas Aquinas.

Here’s something I personally find to be true: Buddhism is a religion for ordinary life, and Christianity is a religion for crises. In my daily life Zen is the predominant practice until I am in crisis. The instant that crisis hits … Philomene in no longer sitting crosslegged in front of a statue of a serene Buddha. She is on her knees before her enormous wooden cross (one that opens up and contains all the ingredients to perfom the Last Rites).

Philomene: “La Purissima” used to be my favorite poem because of how it came through me. Pure — directly from the source to the page. After writing it, I changed only one word.

“La Purissima” means “The Pure” — a Latin term used for Mary, the Mother of God. Although the poem is giving voice to a California Mission, it is also a self portrait of sorts:

I am not here
Bent, brittle
Weed among weeds
Not here
Palms fragrant with lavender
Hair meandering through
The pale grasses
I can no longer remember
I preferred all martyrdoms
To this dry, s
ilent place
There were nights when I feared
My own blood. My eyes
Became wounds. They devoured
Me. And the flies. Ten thousand
Tangled devils. My palms scoured
Dry and thin as communion wafers.
There were nights when the hymns I sang
Became the bones of the Friar, the dust
Upon the graves of stillborn Indians
The winds of La Purisima
Through the pale grassed
I can no longer remember

My current favorite poem, and one I now live with, is: “Pieta In Los Angeles, Part 2”. It’s a meditation before a replica of Michaelangelo’s Pieta.

For two years after my husband John Thomas’s death, my greatest solace was to stand before a replica sculpture of the Pieta, which is down the hall from where John is entombed at Holy Cross Cemetery. I would look upon the Pieta until I became the Pieta.

The marble corpus dangles
Precariously over the Mother’s lap
Her right hand alone supports him
Fingers splayed, deep into his rib cage
Her knees apart
As one would balance an infant
Above him, her soft breasts
Seemingly turn marble into flesh

Her back is straight, head slightly bent
A thin line across her forehead
In her face, a grieving so severe
It becomes serenity

Her left upturned palm
Opened to receive the world’s sorrow
Is at once: a question and acceptance

I reach up
Place my tear-soaked tissue in that hand
In my mind I would climb into the lap
But no, not for me
Not that comfort yet
Must first become
That hand
That face
Become
Rock of sorrow
Eternity in granite
Time and agony
In stone

Later I say that I must become that hand, that face.

Levi: How did you meet John Thomas?

Philomene: We met the morning I was born. This is fact.

John fell in love with me after attending a poetry reading on March 15 (“the ides of March”), 1983 at the “Come Back Inn” in Venice. John had said, “You certainly have not lost your youthful exuberance.” And then “I don’t agree with what you just said, but I appreciate how you said it.” And laughed. At the beginning of the laugh he was not in love. At the end of that laugh he was in love.

We first kissed in the parking spot besides the old Venice jail.

I realized I was in love with John a few weeks later on April 6, 1983, while walking down the Venice Boardwalk with a dozen pink roses in my arms. People stopped what we were doing or saying and stared — looking at me as if I were in love. I thought: “I must be in love.”

Levi: You and John were close friends with Charles Bukowski. Can you share something about him?

Philomene: Since a focus of your piece is religion, I’ll share this, an excerpt from 8 hours of audio tapes of conversations recorded by John:

John Thomas: (Singing) “Jesus loves me this I know for the Bible tells me so.”

JT: That’s a little Sunday school hymn. (Singing) “Carry your Bible with you.”

CB: I heard one on the radio driving on the way to the racetrack. Something like Jesus on the cross and it was beautiful. And they got his hands nailed to the cross and how beautiful it was. And I thought, “These words are good.” These weren’t the exact words, but I translated it that way and I said, “Jesus, this is good.” How beautiful– how they got those spikes in his hands and they’re all singing. God! How beautiful.