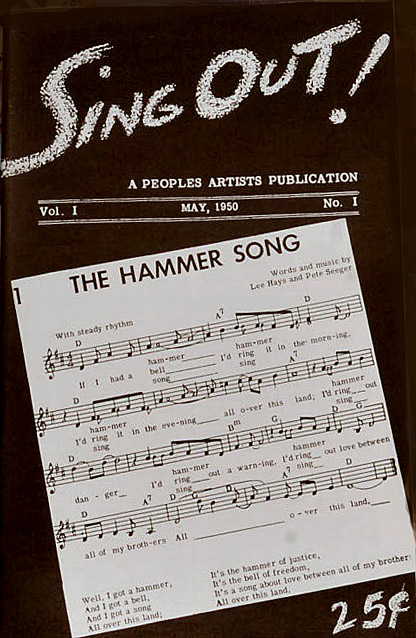 I noticed something strange when I read folksinger Dave Van Ronk’s awesome autobiography a few weeks ago. The gruff ethnomusicologist remembered most of his old friends with sarcasm and bittersweet wit … but he had nothing but full-throated words of love for Pete Seeger, his elder journeyman who has just died at the age of 94. Van Ronk honors him in this book by reprinting in full a column he wrote in 1958 in the early folk music zine Caravan.

Van Ronk’s article must be understood in the context of the small, fervent community of working Greenwich Village folksingers in the late 1950s, just before Joan Baez, Peter Paul and Mary and Bob Dylan would arrive to blow up the scene. Among these earnest young artists, the music of an established and (already then) older folksinger like Pete Seeger might seem corny. Seeger’s strong left-wing opinions might also seem oppressively rigid or tradition-bound to a younger crowd. This critical attitude is the attitude Van Ronk is countering here, in what amounts to a contrarian thinkpiece from 1958.

A few days ago someone handed me the latest copy of ‘Sing Out’ and told me to turn to Pete Seeger’s column, “Johnny Appleseed, Jr.” if I wanted to work up a really fine rage. I accepted the proffered magazine and my friend stepped back a few paces and waited for the explosion. There was no explosion. Of course, I disagreed with the article as expected (the contents of same are of no importance here) but I get no satisfaction out of disagreeing with Pete Seeger. I think the man is really great, in almost every sense of the word, and it saddens me to constantly find myself in the opposition camp every time he ventures an opinion. But when he sings—

Artists of Seeger’s genre are hard to come by in this day and age. He is, in my opinion, taste and honesty personified, and a Seeger concert is a lesson which no singer of folksongs can afford to miss. When he speaks on the stage, his voice rarely rises above a conversational level, and yet he is heard. There is no phony upstaging at all. As a matter of fact, “stage presence” of the Broadway variety is entirely absent. Seeger does not act; he is.

I think that this is the key to his entire greatness. The man has no need to act in order to establish contact with this audience. He genuinely respects the people who are listening to him and refuses to insult their sensibilities with insincere theatrics. And they respond, not to an actor or stage personality, but to the man.

He treats his material in much the same way. I doubt if Seeger considers himself a “folklorist” per se, but rather he looks at folkmusic as a human being, subject to love, hate, enthusiasm, sorrow — in short, all of the emotions with which folkmusic deals. He is not “preserving” folklore but living it, and so are we. And there is no dichotomy between the performer and the context of his songs. This is the reason why one never gets the “isn’t this cute” or “how quaint” impression from Seeger’s singing. When he sings, all of him is involved. Which is another lesson that many singers of folksongs could profit by.

Again, I can’t say I think much of Pete’s point of view on many subjects. He is forever espousing causes which at best leave me cold. But I can’t say that I think he would be better off without his causes and opinions. However wrong I happen to think they may be, they reflect a genuine concern with the real world which, to my way of thinking, is an indispensable part of a whole person, which I think Pete Seeger is.

The tragedy is that there are almost none like him. He is almost unique and insofar as such people in folkmusic are rare, then it becomes necessary to form “societies for the preservation of folklore” — or perhaps the word should be embalming.

After reprinting this 1958 column in his memoir, Van Ronk follows up with his current thoughts, four decades on:

Naturally, this piece did not attract as much response as my attack on Elektra, but at least one person took me to task for calling Pete a “real” folksinger. What can I say? He is the man who invented my profession. When his first solo album, ‘Darling Corey’, came out, it was like a clarion call: this is the real stuff, played the way it should be played. What is more, I always thought Pete was a much better musician than most people appreciated — including most of his fans. He phrases like a sonofabitch, he never overplays, and he dug up so much wonderful material. Whatever our disagreements over the years, I learned a hell of a lot from him.

The cover of the 1950 debut issue of “Sing Out” magazine (the established folk music magazine that Caravan liked to take potshots at in 1958) is pictured above, proudly bearing the sheet music and lyrics to one of Seeger’s best-known songs, “If I Had a Hammer”. And here’s Pete in November 2012, performing an extended version of “Turn Turn Turn”, the hit song he crafted from a verse in the Biblical book of Ecclesiastes, for his friend David Amram’s birthday party.