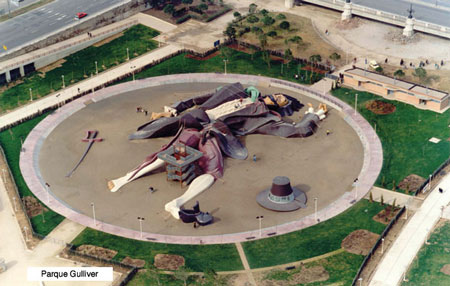 1. A Gulliver playground in Valencia, Spain.

3. Amazingly, the Velvet Underground will be reuniting at the New York Public Library, though I’m not clear if this will be a talk, a musical performance or both. It’s sad that late sweet-toned lead guitarist Sterling Morrison will be missing, but it’s a nice surprise to see the reemergence of Doug Yule, who is widely disliked for replacing the great John Cale on bass after Reed kicked Cale out, but who helped them record their best album.

6. In the end, after a sluggish start, Electric Literature’s much-discussed experiment with Twitter fiction turned up an excellent Rick Moody story about relationship anxiety, thwarted love and people who cling to their phones on dates. An excellent Rick Moody story, that is, but not necessarily an excellent Twitter story. Moody focused on the 140 character limit, but I think Twitter’s most distinguishing feature is not its character count but its pacing and easy interpersonal immediacy (note: you can follow me on Twitter here). It became clear why Moody missed this when he revealed in an interview that he’d taken on this project because Electric Literature had asked him to, not because he had any actual interest in Twitter. There are many writers who do get Twitter — say, Colson Whitehead, who is marvelous at it — and I hope Electric Lit will turn to one of these writers for their next foray. Overall: great publicity, moving story, well done all around.

7. There will not be a Literary Kicks Best Books of 2009 list. Please excuse my grumpiness, but I mostly find these aggregate lists annoying and unremarkable. I do like to read personal lists of lifelong favorites by smart readers, but I don’t care for annual lists or lists put together by groups.

10. I don’t agree with this. I’m amazed at how good “The Office” manages to be, season after season. Sure, there are ups and downs, but this is one of those rare shows — like “Twin Peaks”, like “The Honeymooners” — that represents television’s ascent to the realm of literature. I will watch it until Jim and Pam drop dead.