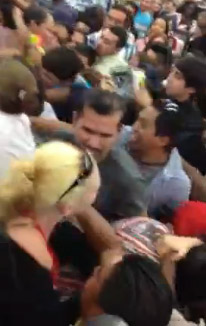 I was talking with friends about the post-Thanksgiving “Black Friday” shopping craze that has become an increasing meme in the United States of America over the past few years. The prevailing opinion among my friends is that this trend represents yet another terrible new turn towards casual violence, selfishness and greed in our craven society, and reports of maniacal frenzies at spots like this Walmart in Moultrie, Georgia seem to bear this interpretation out. One person caught in the Moultrie, Georgia frenzy was quoted expressing disgust about what went down:

“It’s ridiculous and I don’t understand why people would want to treat each other like that,” said B.J. Wright, also a Moultrie resident and frequent shopper there. “My God. It’s just a phone. It’s a material thing. And these are the holidays.”

These words are true … and yet as is often the case when studying the fringes of societal behavior, a fascinating hidden truth emerges once we begin to look deeper into the phenomenon of Black Friday. What appears at first to be a descent into hostile, greedy isolationism turns out to be suffused at nearly every level with communitarian or social impulses. The biggest shock about Black Friday is that the explosion of violent selfishness may have originated as an expression of maniacal communitarianism. Let’s look at all the ways that a Walmart shopping frenzy in Moultrie, Georgia embodies impulses of sociability rather than brute individualism:

What a twisted and fascinating paradox our communitarian impulses are! My point in creating this list is not to forgive the stupidity of Walmart riots, or to find value in weird new American consumerist memes like Black Friday (personally, I do not have the slightest interest in going to a Walmart on the day after Thanksgiving or any other day). Rather, my point is to remind us that we must always look beneath the level of the obvious when we try to analyze the unusual things we do. A person who buys into the superficial notion that Black Friday is about selfishness is missing the larger meaning of the event, and is probably unaware of how frequently we all cross the line between selfish impulses and communitarian impulses in our everyday lives. The line between selfishness and communitarianism often takes a surprisingly jagged course.

Several months ago, Walter Kirn wrote a personal article about Mormon culture for the New Republic that surprised me by stating what, I suppose, should have been obvious. I had always visualized the Church of Latter-Day Saints as a rugged pioneer religion, as flinty and individualistic as the open country it thrives in. But, Kirn pointed out, Mormonism is actually ” our country’s longest experiment with communitarian idealism”. Communitarian? It took a minute for that to settle in after I first read it, though in fact I see this spirit of friendly cooperation among the several Mormons I personally know, and the cohesive history of the embattled religion bears this out. The fact that Mormonism is an experiment in communitarianism is not even so much a surprising fact about Mormonism as it is a surprising fact about, well, everything. Our societal impulses seem to trump our selfish impulses often they directly conflict, or at least to strongly balance and counter our selfish impulses. We humans are nowhere near as individualistic as we like to think we are.

But the jagged line between selfish individualism and communitarianism does cut both ways — and if it’s true that an apparently greed-oriented event like a Black Friday Walmart smartphone riot can be an expression of social spirit, it must also be the case that some events that appear to be driven by social impulses are in fact driven by selfish concerns. This calls to mind a wedding I went to many years ago. The bride and groom were both old friends from high school, but in an unexpected and unprompted burst of pre-wedding jitters and extreme anxiety a couple of days before the wedding, the bride-to-be suddenly blurted out to me a shocking array of dirty secrets and negative feelings about the man she was marrying and the family she was marrying into, and about her blatantly illogical and unromantic motivations for taking this step in her life. The bride’s words rang harshly in my ears a couple of days later as I sat in the church watching the wedding, in a grand room suffused with sweet symbols and momentos of romance and idealistic love and familial affection. The visible atmosphere of social warmth in the church was actually a fragile veneer over a teeming whirlpool of alienation and isolation. (I’ve since lost touch with both the bride and the groom, and I do hope they have managed to forge a strong relationship from these confused beginnings — I think it’s entirely possible that they have.)

In the existential cauldron of real life, selfish greed and generous societal awareness probably intermingle constantly, and we should never make the mistake of emphasizing the power of either impulse to the exclusion of the other. The important lesson to be learned, I think, is to avoid the kind of superficial or simple analysis of our everyday events that would lead us to conclude that either of these impulses can ever operate in the absence of the other.

When we are most alone, we may be the most connected. When we are the most connected, we may be the most alone. It’s the way our individualistic and communitarian impulses twist together that provides the torque of our lives. We should always be aware that both impulses are always in effect, and then we have a better chance of understanding our own lives — our private lives and our shared lives — as deeply and fully as we can.