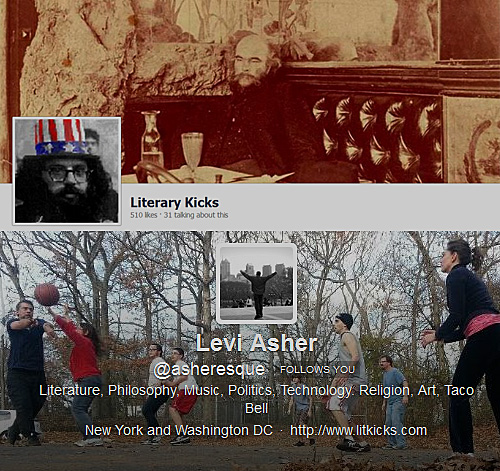 As hard as this is to believe, this summer will mark the 19th birthday of Literary Kicks. I really have no idea why I’ve been doing it this long. I once had a reason; I forgot it. I guess I’m still having fun, though sometimes it’s hard to tell.

Because I make my living as a software engineer for websites, I’ve been able to use Literary Kicks as a platform for technical experimentation as well as a means of literary expression. I follow trends closely, and I select my technologies very carefully (for the past four years, I have been heavily into Drupal, though I’m sad to be missing Portland DrupalCon 2013 as we speak).

I’ve seen every scientific approach to content management software come and go, along with quite a few fads: Object-Oriented Databases, RSS, SOAP, Design Patterns, Model-View-Controller, Flash, AJAX, REST, Agile, NoSQL, Cloud Computing, Semantic Web, Responsive Design. Through all of these twists and turns, the content itself is what matters, and the format of content itself — good old Unicode text, wrapped in XML — has really not changed much at all. Looking back on nearly twenty years of web content management drama and error and trial, I can at least happily report this: we web developers haven’t usually damaged our content too much. We tried to keep it simple, tried to just keep the Apache servers running. About half the time we managed to avoid crashing and burning.

The biggest trend in content management software today, as I see it, is the cloud of enmeshed social content driven by five electronic media giants. I’m talking about Facebook, Twitter, Google, Amazon and Apple — five companies that are already so deeply embedded into the various worlds of literature, entertainment, art, media and publishing that these worlds could not currently exist without them. From innovations in social networking and authorial identity to search engines to e-book publishing to the art of presentation and interface, these five companies currently drive the progress of web publishing — that is, the progress of publishing and media as a whole in 2013.

I consider Facebook, Twitter, Google, Amazon and Apple the big five, though I’m aware that various other ventures like Yahoo, Tumblr, Microsoft, the New York Times, Samsung, Pinterest and Goodreads are trying to break into this winner’s circle (none of them, as I see it, have broken in yet, and most probably never will). As for the five giants, I have mixed feelings about the power they wield. I’m totally unpsyched, for example, about Google’s ill-conceived Google Glass project, since it has never been my wish to have humanity become more robot-like.

More often than not, though, I like the innovations these companies offer, and I always welcome these innovations into the routines I follow as I evolve the Literary Kicks website. I have been having a blast on Twitter since joining as @asheresque in 2007, and I sometimes think I put as much thought into my tweets as I put into my blog posts. Only a few months ago I launched a new Facebook page for Litkicks, and this has also become an absorbing new focus of my attention.

If you are a Litkicks reader and don’t know about the Facebook page or Twitter account, I’d like to invite you to check one or both out. By following either one, you will be informed of every blog post I publish. I’ll also post links of interest and quick updates separately to each place, with two separate readerships (and attitudes) in mind.

The Litkicks Facebook page is where I post quick links of interest about new developments in classical, modern, postmodern, experimental or transgressive literature. I’m now also displaying these Facebook updates on the Litkicks front page (if you go to this site’s front page now and scroll down, you’ll see some of these new links on the right panel).

My official Litkicks Facebook page still feels new to me, and I’m really having fun with it so far. I love the fact that many people who’ve clicked “Like” are from different parts of the world. If I can be reaching so many different countries and societies, I must be doing something right. (I also take this as a reminder to keep my own literary awareness international, and I hope the interactions on Facebook will help me do that.)

My Twitter account (which represents me, Levi Asher, not Literary Kicks) is something completely different. This is for my private opinions, my observations, my jokes, my bullshit. I also retweet links that I personally find interesting — not necessarily literary links, but general culture links, political thoughts, song lyrics, silly weirdness, anything I like.

Since I use Twitter to interact with many of my literary critic/lit-blogger friends, I handle a lot of insider-ish stuff of Twitter: publishing industry gossip, new Drupal modules of interest, complaints about Philip Roth being overrated, arguments about whether or not writers should always get paid. I’m always up for a response or a dissenting opinion when I tweet my opinions or ideas.

So, to sum up: Facebook and Twitter are part of the “content space” that is Literary Kicks, and can be used as entry points to follow this blog. If you’re interested in literature, please follow my Facebook page by “liking” it. If you’re interested in me, hit me up on Twitter. And, of course, please keep coming back to this blog, where the main action will always be. Maybe we’ll even figure out what to do with Action Poetry next.