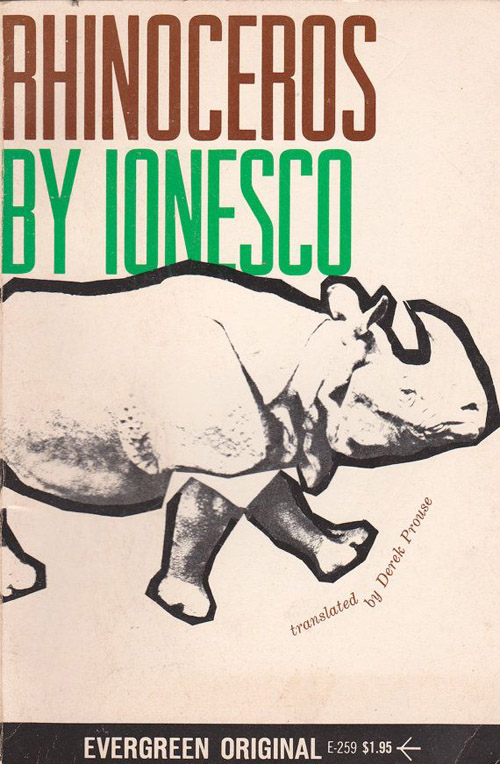 In the play called Rhinoceros by the Romanian dramatist Eugene Ionesco, two men are sitting in a cafe in a small French town when the improbable news arrives that a rhinoceros was seen in town. Soon the two men look out the window to see several rhinoceroses rampaging through the streets. They are surprised at this development, of course … and then one of the two men starts transforming into a rhinoceros as well.

Eugene Ionesco had grown up in Romania, one of several Eastern European nations shattered by the first World War that eagerly allied with Hitler for the second. Ionesco’s Rhinoceros is about Romania, of course — about decent citizens of a modern society who transform into witless, delirious fascists, and about one decent citizen, the protaganist Berenger, who does not catch the disease but cannot cure those who do.

Rhinoceros presents a blunt metaphor, but Ionesco has also delivered subtler messages about the dangerously thin veneer of civil society during his long career as a Romanian absurdist playwright in French exile. His earlier play The Bald Soprano offers a polite dinner party in which a few friends and romantic partners discover that language has ceased to be a connective tissue between them. They all know each other, and yet they suddenly find themselves unable to discern their relationships and even their own identities. The more they try to talk, the more they teeter towards complete estrangement.

The characters in The Bald Soprano don’t descend into fascism, though they experience the fear and alienation that underlies every breakdown of civil society. As in Rhinoceros, their condition appears to be a fatal one. The Bald Soprano found a receptive audience in Paris five years after the liberation from Nazi rule, though it took Ionesco nine more years to construct the hard-edged exorcism that was Rhinoceros, his most famous work. 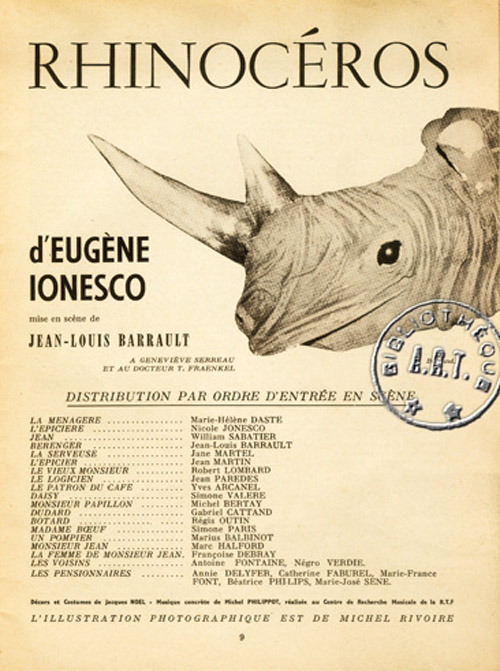 Ionesco’s work also resonates with the later absurdism of Harold Pinter, Thomas Pynchon and Don DeLillo. How do we protect ourselves when our means of communication are hacked? How do we even survive? Like the airborne toxic event of DeLillo’s White Noise, the degredation that descends over a fine civilization in Rhinoceros is a dumb and gigantic thing, bigger than all of us, leaving us helpless to resist. Though we must resist, and we do.

One reason to pay attention to Rhinoceros in 2016 is that the great comic actor Gene Wilder, who died in August, starred in a little-known 1974 film version of the play. It may seem odd that this unique movie is not well-known, especially since it reunites Gene Wilder with the great Zero Mostel, with whom he starred in the brilliant original Mel Brooks movie The Producers.

If you watch the Gene Wilder/Zero Mostel Rhinoceros you will quickly understand why it is not a well-known movie: it’s just not very good, and is a chore to sit through. The great chemistry between Gene Wilder and Zero Mostel that made The Producers so wonderful completely falls apart here. Zero Mostel had played the original “Jean the rhinoceros” in a hit Broadway production of Ionesco’s play years before. The burly actor’s bombastic interpretation of a man becoming a jungle beast must have worked very well on a theater stage. But his loud performance comes off shrill and grotesque in Hollywood close-up, while Gene Wilder’s character shrinks away to nothing. The two actors were comic equals in The Producers, but the role of Berenger (played by Eli Wallach in the earlier Broadway play) is a pure straight man role. Wilder does not make himself believable as an introspective wastrel with a drinking problem, and finds no center from which his character can radiate a personality. Gene Wilder should never be cast in a straight man role; it suffocates his performance here.

This unfortunate Rhinoceros was directed by Tom O’Horgan, one of the masterminds behind the superb 1968 hit Broadway musical Hair, and it even includes original musical numbers by Hair’s talented composer Galt MacDermot. So much talent for one bad movie! O’Horgan and McDermot seem to both want to bring a 1960s/1970s hip and freewheeling “summer of love” sensibility to Ionesco’s decidedly 1950s-ish play, and the arch combination just doesn’t work at all, neither as comedy nor tragedy. 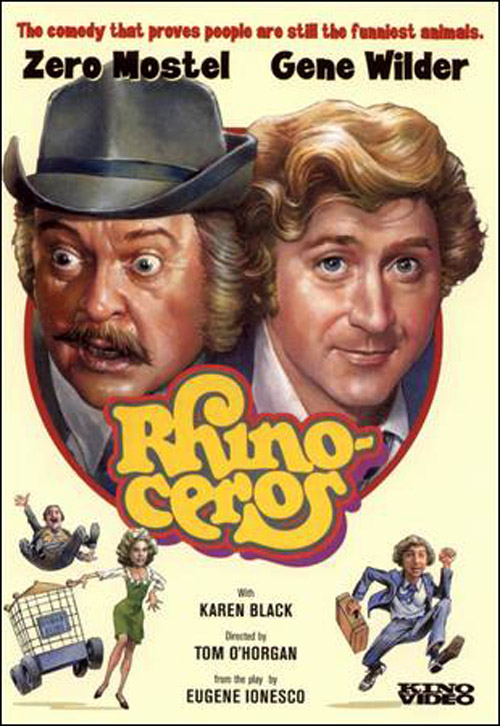 Still, any Rhinoceros is worth looking at, and there are worthwhile moments in this film, like the camera angle that places 1974’s infamous period villain President Nixon between Mostel and Wilder as they yell at each other. This image carries extra weight today. We survey our landscape at the end of 2016 — the year that took Gene Wilder and so many other people we love, the year that left us with a buffoonish, hate-spewing and blatantly corrupt president-elect who makes Richard Nixon seem honest by comparison. 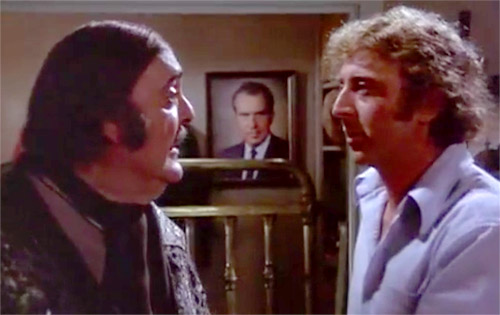 It’s been an absurdist year here on planet Earth. Perhaps the happiest thing I discovered when Googling “ionesco rhinoceros” in preparation for this article is that this 1959 play has apparently found its way to theater companies all over the world. There are productions in Romania and in France, of course, and also Germany, Brazil, Canada, Italy, Lithuania, India, Iran.

Eugene Ionesco’s fable is apparently something the whole world can relate to. Perhaps the play is more famous around the world than it is in my own country. But 2016 has been our rhinoceros year, here in the USA. And absurdism has really never gone out of style, has it?