I wonder how many people who walk through New York City’s Pennsylvania Station every day know that this was once one of the most beautiful and famous train stations in the world? 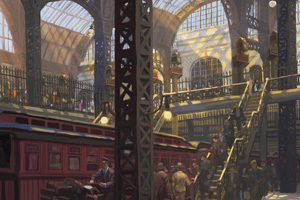 The cavernous beaux-arts building, clad in stone, steel and glass, was demolished in 1964 to make room for a plain modernist complex including an underground train station, a skyscraper and Madison Square Garden. The travesty of this loss is the subject of a heartfelt children’s book, Old Penn Station, written and illustrated by William Low. The author’s lush and warm paintings pay tribute to the lost architectural masterpiece by imagining them back into being. I got a chance to ask William a few questions about Old Penn Station recently.

Have you gotten a good response to this book? Are you surprised by any of the reactions?

I’ve had a terrific response to the book, especially with the artwork. The book took over three years to complete, so I am naturally proud of the way that it came out. However, I am surprised by the emotional response to the book. The building was torn down forty years ago and yet the outpouring of sadness and anger continues to amaze me.

Do you think this book appeals differently to New Yorkers and non- New Yorkers?

At first, I’d say yes, especially if the reader is a New Yorker who remembers the original Penn Station or has visited its crowded, underground replacement. For non-New Yorkers, I hope that the art will draw them into the story.

But I hope that this book will not be perceived as a New York book, because Penn Station really is a symbol of a broader change in America. Many believe that the destruction of Penn Station was in part, a result of changing times and attitudes during the 50’s and 60’s. During this age of the suburban house, many cities suffered when its middle-class residents moved out of the city. Long distance rail travel also suffered when travel by plane became affordable. This had a direct effect on cities and railroad terminals on a national scale.

Grandeur comes to mind. That’s something that adults can understand. But my focus is really on the child’s perspective, and I would imagine that the station must have been an imposing, scary place because of its size. Converting this massive architectural space into a kid friendly place was tricky … and I decided to focus on light and the effects of the changing light instead, to make it less imposing, more magical. 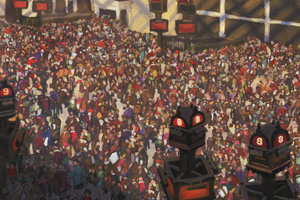 Are you a “train freak”? Do you find that trains and train stations have always been a big part of your sensibility, or is it just that there is something special about Penn Station?

My father had a Chinese hand laundry in the Bronx next to the elevated number 6 Pelham train. I used to sit for hours by the front of the store reading comics, drawing and watching the train go by. I guess that makes me a “train freak.” When I was in high school, I had a part time job in a store in Grand Central Terminal and I fell in love with this space.

This was during the mid-70’s, when the homeless slept in the Terminal’s waiting room and it was a pretty scary place at night. The financially strapped Penn Central Railroad wanted to overturn the Terminal’s Landmark status, to clear the way for its development and possible demolition. Protestors (including Jacqueline Kennedy Onassis) stopped traffic on Park Avenue South, determined to save Grand Central Terminal from the fate of Penn Station. That was the first time that I heard about this station and upon further research, I rediscovered the original Pennsylvania Station and my heart was broken by its loss.

Do you think the proposed relocation of Penn Station in the Farley Post Office across the street will be a success? Are you excited about it, or do you have mixed feelings about this attempt to replace what was lost?

I have mixed feelings about this project for a number of reasons. I don’t know if the new station will ever be built, given the cost and size of the project. Of course, I welcome any change and I would even tolerate the inconvenience during this new construction. But the Farley Bulding is on Eighth Avenue; the station will go further west. That extra block makes a big difference in terms of accessibility, convenience and ease of use.

What are some of your favorite works of classical architecture in New York City that have not been torn down?

Grand Central Terminal is at the top of the list. I just love the restoration and the attention to detail. As a Long Island commuter, I am jealous that we do not get to pass by this incredible station on a daily basis.

What are some of your favorite train stations in cities other than New York?

I’ve been to the magnificent Amtrak station in Philadelphia and the Union Station in Washington D.C. is also terrific. One day, I’d love to visit the large train stations in Europe.

You can see more of William Low’s work at his website. You may recognize his richly expressive painting style if you’ve ever seen the classic Penguin paperback series of John Steinbeck novels for which he once painted a series of evocative and memorable covers.

But it’s his own city that brings out this author’s deepest convictions, and Old Penn Station stands as a personal statement about the importance of great public artwork for young growing minds. William Low will be signing copies of this book at Books of Wonder in New York City on Saturday, May 19 (information can be found on on the store’s website).