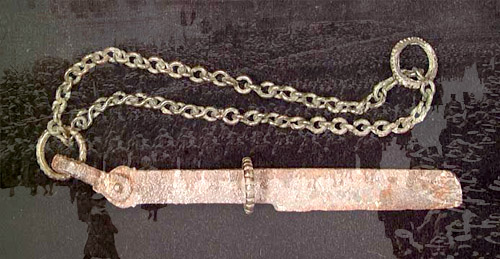 A few days ago, an African-American teenager was killed by a policeman for no apparent reason in a town called Ferguson on the outer edge of St. Louis, Missouri. As outraged citizens began protesting in the streets, the police made a bad situation worse by confronting the protestors in terrifying battle-line formation with quasi-military equipment and tear gas grenades, denying the right to assemble, arresting journalists and photographers.

Now the protest has become a global concern, and the anger that many of us in the USA have been expressing contains some pent-up rage, since we’ve all been watching video footage from Gaza, and Ukraine, and Syria and Iraq. We’ve been seeped in images of foreign violence all year, so the images of violence in the middle of our own country can feel like the revelation of a hidden universal truth: we are part of this war-torn world.

Universal truths often emerge rapidly in times of public crisis, but we need to carefully choose which universal truths we want to nurture. It is indeed a discouraging truth that our own benevolent authorities can commit murder, that our own peaceful towns can erupt in bitter conflict, all on a pleasant summer day.

But there are also other more encouraging and instructive universal truths that emerge in difficult moments like these, though the positive lessons often shine only weakly through the ugliness and noise. Because so many people in Ferguson, Missouri are sharing photos and videos and instant reports, and because the local police chiefs and politicians have been issuing regular press conferences, the mechanics of this crisis have been relatively transparent. We haven’t yet learned why an African-American teenager was shot by a cop, but we definitely have learned how the reaction to the shooting devolved into a riot.

The whole story went like this: first, a cop shot a teenager for no reason. Then an angry crowd expressed its outrage, and the police snapped into brutal military mode to quell the protest. Why was the police response so brutal? Because the cops felt threatened. They felt threatened because one of them had made a terrible mistake, and retributions were sure to follow. The violence of the police response was a reflection of the police department’s internal sense of guilt about the original shooting.

Of course, the overreaction by the police only made the protestors more determined to stand their ground, and unfortunately the scene on the street also began to devolve into some amount of mindless destruction and looting, thus creating a demand for more police. The cycle was complete.

The object in the image at the top of this page looks like a weapon, but it is in fact just an antique razor, found among other ruins of medieval England centuries after it had probably been used by at least one man to shave his face. I choose this image (which I superimposed on a scene of a World War One military parade) to represent the philosophical principle known as Occam’s Razor.

William of Ockham was a 14th century theologian and philosopher known for a declaration that is widely loved among philosophers even today. “Occam’s Razor” is an appeal to empirical simplicity, to common sense, to the power of rationality and the importance of avoiding bias. The statement is this: given a difficult problem to solve, the simplest answer is probably the one to keep.

Wikipedia’s introduction to the concept explains it well:

Occam’s razor … is a principle of parsimony, economy, or succinctness used in problem-solving. It states that among competing hypotheses, the one with the fewest assumptions should be selected. Other, more complicated solutions may ultimately prove correct, but — in the absence of certainty — the fewer assumptions that are made, the better.

Occam’s Razor is a famous philosophical statement, but it’s not a cliche, because a thoughtful consideration of this principle can still provide surprising and provocative results in many applications. I thought of Occam’s Razor as I followed events in Ferguson this week.

I also thought of Occam’s Razor when I wrote last weekend’s Philosophy Weekend blog post arguing that the Watergate scandal that ended Richard Nixon’s presidency 40 years ago was not actually the product of Nixon’s personal psychological problems but rather of a reasonable fear of espionage and military weakness shared by many Americans during the Vietnam War era. I also thought of the Razor several months before when I wrote a series of blog posts suggesting that every major incident of genocide during the last couple of hundred years has been primarily motivated not by hatred or prejudice or racism or religious bigotry but, again, simply by fear.

This emphasis on fear as a root cause of conflict is indeed the major truth that Occam’s Razor can deliver to us as we analyze any crisis, whether in Ferguson, Missouri or in Israel and Palestine or Russia and Ukraine or Syria and Iraq. The answer always fits, and it always explains everything. Always.

Here are some of the bad answers that Occam’s Razor can help us shave away, when we try to think intelligently about the violent conflicts of our time:

It’s sad to realize how popular these three general beliefs are, and how widely they are held. If a poll was taken, I bet all three of these statements would rank higher in public acceptance than the one I am proposing, which is:

Indeed, the hypothesis that fear is the root cause of most civil and global conflict survives Occam’s Razor in a way that the other three statements do not. To posit a mental state or motivational force called “evil” or “hate” is to introduce murky and quasi-demonic concepts where they are not needed. We do not know for sure what “evil” is or where “hate” originates. But we do all instinctively know what “fear” means. If all the historic and current conflicts of the world can be explained simply as products of fear, than this is a better answer than any answer involving intangibles such as “evil” and “hate”. Fear is the more primal and direct phenomenon, and thus better passes William of Ockham’s test for reasonable belief.

Since it is indeed possible to find strong expressions of fear as motivating factors for most conflicts or mass atrocities, the statement that posits evil or hate as more influential than fear does not pass Occam’s Razor. That takes care of the first statement.

As for the second, which posits deeply embedded societal difference between, say, street protestors and cops in Missouri, or between Arabs and Jews in the Middle East, we will quickly bog down in contradiction once we try to characterize exactly what these differences are. On what scale is a society’s moral sophistical supposed to be measured, and how do we know that our cultural biases are not reflected in these scales? The closer we look, the less clarity we will find regarding these societal differences, and therefore this explanation is more of a conceptual stretch than the simple explanation that conflict between societies is a product of fear.

As for the third statement above, the Dostoevskian observation that humans often enjoy violence, we must admit that this is in itself true. However, it does not appear evident that our natural enjoyment of violence plays a strong role in our politics. While we should not deny the twisted aspects of human nature, we can at least take comfort in the fact that our violent instincts generally provide only weak and sporadic signals to our rational minds, and that most people will choose to behave decently to each other when they can. Most importantly, we can observe that psychological urges towards violence are a private individual phenomenon, and that these secret individual urges are not likely to occur to large numbers of people at the same time. This means that the collective behaviors that become dominant in times of a public conflict — protests, fights, police riots, foreign invasions, wars — are not likely to be expressions of private urges to violence overcoming many people at the same time. That would require a practical mechanism to exist for the transference of private urges to public policy, and this mechanism itself is too murky and mysterious to survive Occam’s Razor.

To sum up: sure, we could believe that the ongoing disaster in Ferguson, Missouri is a manifestation of spiritual evil, or a result of societal deficiency, or the product of dark psychological urges towards violence. But, again, William of Ockham has advised us to always select the simplest answer that successfully addresses all particulars of the question. In Ferguson, Missouri, the simplest possible answer is “fear”.

In Israel and Palestine, the simplest possible answer is also “fear”, and it is too in Ukraine and Russia, and Iraq and Syria. In all cases, we can trace the influence of fear on both sides of the conflicts, and we can sadly watch everything unfold from the fear instinct alone. It’s an answer to a difficult question that holds up pretty well. William of Ockham showed us the method 700 years ago, but we’re still struggling to wield this razor correctly.