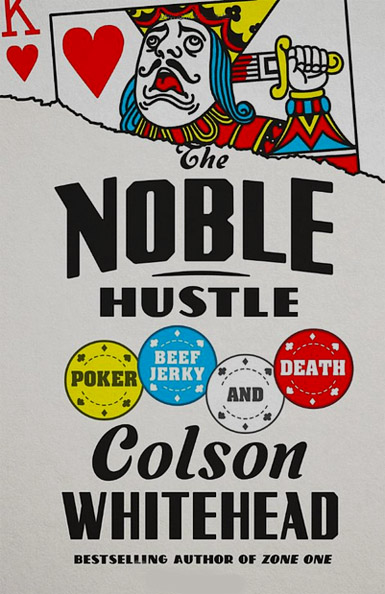 I was nothing but psyched when I heard that postmodern novelist Colson Whitehead was writing a book about poker. Sure sounded like a great idea to me.

Whitehead is a clever, acidic satirist with a gift for inventive situations and touching emotional connections. Can he write? Absolutely — novels like The Intuitionist

and Apex Hides the Hurt

have proven this. But can he write about poker? His new book The Noble Hustle: Poker, Beef Jerky, and Death

has some big problems (and, no, I’m not going to refer to the book as a “bad beat” or a “dead hand” so please stop expecting the obvious puns).

This book began as a magazine article, and maybe should have stayed that way. Whitehead was sent to Las Vegas by Grantland to play in the World Series of Poker, and The Noble Hustle describes his emotional state (troubled) and his confidence problems (severe) as he prepares for this showdown by playing at the Trop in Atlantic City, reading up on the classic poker texts, even obtaining an official poker coach. These preparatory sections of the book show off Whitehead’s literary dexterity, and are occasionally dazzling. The further away from poker he gets, the better he writes, as when he soaks up the sensations of an Atlantic City bus ride that turns out to be less seedy than he expects:

The other passengers queued up for AC were exfoliated and fit, heading down for Memorial Day fun, not the disreputable lot of Port Authority legend. Their weekend bags gave no indication that they contained their owners’ sole possessions. Where have all the molesters gone, the weenie waggles and chicken hawks? Whither the diddlers? The only shabby element I registered was the signage at the Greyhound and Peter Pan counters, still showcasing the dependable logos remembered from the bad trips of yore. Returning from a botched assignment or misguided attempt to reconnect with an old friend. Rumbling and put-putting to a scary relative’s house in bleak winter as you peered into the gray mist through green, trapezoid windows. Greyhounds were raised in deplorable puppy mills and drugged up for the racetrack, I think I read somewhere, and Peter Pan used to enter kids’ bedrooms and entice them, so perhaps there is a core aspect to the bus industry that defies rebranding.

Okay, so Colson Whitehead can write about buses. But, again, can he write about poker? Something goes wrong in this book whenever he tries, as when he presents an extended explanation of the familiar ranking of poker hands, constructed entirely of pop-culture metaphors:

Next comes two pair. You have one pair of thermal socks. Ready to throw down with Old Man Winter, “To Build A Fire”-style. Robotron over there has one pair of Miles Davis CDs and one pair of coupons for free Jazzercise lessons. He wins: two pair beats having one pair. Now let’s say you also have a pair of ‘Golden Girls’ box sets so that you both have two pair. The highest value pair determines who wins. In this case, Miles Davis takes it for Robotron.

I really hope for the sake of Colson Whitehead’s readers that nobody ever sits down at a real poker table with this as a guide, because this is not a helpful explanation of poker hand rankings. It may be funny, but it clears up absolutely nothing, and there is not a single human being anywhere in the world who can’t already understand what “two pair” means and would benefit from the help of a metaphor involving Miles Davis, ‘Golden Girls’ and Jazzercise. Two pair is two pair. Two pair beats one pair. Higher two pair beats lower two pair. These concepts are innate. I taught my own kids how to play poker from a very young age, and I have seen for myself how easily a new brain can assimilate and immediately begin to employ notions like “one pair” and “two pair”. Metaphors are simply not useful here.

Why would a very good writer like Colson Whitehead lose his firm sense of direction on a project like this? I have a theory, and it has to do with the familiar literary problem known as the anxiety of influence. Whitehead is a compulsively original writer — this is much of the appeal of his books — and I suspect that he can’t face up to the horrible fact that in taking this assignment from Grantland he is totally copying the now legendary James McManus, who was also sent by a magazine to play in the World Series of Poker, and ended up playing extremely well and writing a wonderful book about the experience, Positively Fifth Street

Whitehead acknowledges James McManus in this book, and is clearly aware of the problem that, even if he reaches the final table, he’ll be following in McManus’s footsteps. There may also be other literary reasons for the author’s apparent ambivalence. Whitehead’s entire anguished persona as a writer would be incongruous with winning the World Series of Poker. It would be like Charlie Brown kicking the football. If this happened, what would happen to his career as a dark and self-mocking author?

I believe this structural ambivalence doomed this entire project from the outset, because through all of Whitehead’s frantic preparations and worries about the World Series of Poker in this book there is a strange lingering sense that the author is focused on everything but winning. He is clearly a writer first and a poker player second, and as a writer he knows that “literary amateur reaches final table” has already been done.

The fact that Whitehead is not dying to win as he narrates his key hands renders him a very poor poker writer. (I speak of “poker writer” as a distinct type because I am a very enthusiastic Hold ‘Em player myself, and I read a lot about poker, and also write a lot about poker

.) One example of a really good poker book is Gus Hansen’s Every Hand Revealed

, a fascinating stream of consciousness by a great player in a tournament. Gus Hansen does win in this book, and it’s a gripping book to read precisely because he so badly wants to win.

The Noble Hustle proceeds as a panorama of human anxiety, a comic portrait of a person who isn’t really in the right mood to play a poker tournament and who plays and quickly loses. The only time Whitehead really finds his poker-writing mojo is in the final sequence, when he crashes out of the World Series of Poker on the second day (a fairly lame showing, though at least he made it past the first day). One senses in these moments that, finally, the author is engaged and really trying hard to stay alive. Perhaps he is engaged here because, even though he still doesn’t want to copy James McManus and make it to the final table, he also realizes that it would be embarrassing to leave the tournament too early, which is what he’s about to do.

The best poker writing in The Noble Hustle takes place in these final pages, as Whitehead’s blinds dwindle away and he carefully selects his fatal last chance. Apart from these few gripping poker scenes at the end, this is still a pretty good Colson Whitehead book. It’s gritty and psychologically deft and propulsive, and Whitehead is always a clever and entertaining guy to be around. It’s a good Colson Whitehead book, but it’s just not a good poker book. I’m not going to end this article with a poker pun, so stop waiting for it.