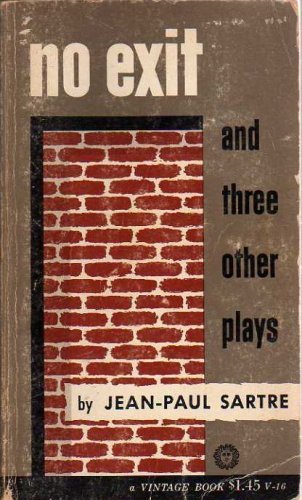 You know those internet quizzes where you find out what kind of Disney character you are, what root vegetable you are, which flag of the world you are? Well, I don’t know if there’s a quiz for which classic existentialist text you are, but if there were, I’m pretty sure I would be No Exit by Jean-Paul Sartre.

This is a comic play about three recently dead people who find themselves in hell. But hell, in Sartre’s vision, has no burning embers or rapacious goat-monsters. Instead, it’s a mundane hotel room with a polite servant and Second Empire furniture. The three people, puzzled at their surroundings, begin to converse. They are:


Within minutes of their first meeting, the three people already start to drive each other crazy. Inez questions Garcin’s tales of bravery, and quickly uncovers the fact that Garcin exaggerated his wartime exploits — in fact he is a coward who uses antiwar rhetoric to mask his inner fear of being hurt in battle. Inez has no use for Garcin, but is very interested in the pretty young Estelle, who in turn finds Inez repulsive and is drawn to Garcin. Garcin has no interest in Estelle, though, and only yearns to win Inez’s acceptance and respect.

But to hear these words as a statement of misanthropy is to misunderstand the real point of the play. It is only because each of the three people yearn for each other that they are in such pain.

In fact, the title of the play contains a joke, because the three characters are free to exit the room at any time. But they don’t, because what they need most is each other.

This ‘perfect triangle’ is an archetypal fictional device that recalls many other tragic literary triangles from Othello and Iago and Desdemona in Othello to Stanley, Stella and Blanche in A Streetcar Named Desire to Mr. Orange, Mr. Brown and Joe in Resorvoir Dogs. There are also many other kinds of geometric ‘existential templates’ — squares, pentagons, rhombi. I have been in a few complex structures like these in my own life, and like most people I often find it hard to extract myself from them, even when I am able to understand what is happening. No exit, as they say.