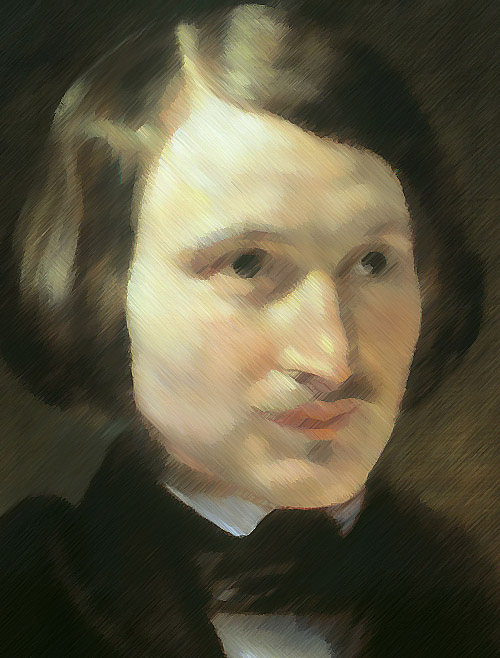 We live in a Gogol world. He may have died 150 years ago but his world is our world, a world of absurdities haunted by ghosts and government clerks, where people are victimized by committees and asylums, where rational insanities and irrational truths determine the course of lives. His writing remains modern not only because he avoids the archaic language that makes other writing of the era virtually unreadable, but because he deals in universal truths. Reading Gogol, we recognize characters, places and situations to the extent that the only difference between the streets we walk on our way to work and the frozen cobbled gas-lit streets of his St. Petersburg are aesthetics. We can stare out from the windows of our offices, our shops and our call centers and feel exactly what Gogol and his characters felt during the intolerable, endless office hours staring out onto the Neva River.

He was born in 1809 in the backwoods Poltava Province of Ukraine to middle class Cossack parents. Bullied at school, nicknamed “the mysterious dwarf,” he immersed himself in literature, writing a shoddy epic poem written in sentimental German style called “Hans Kuchelgarten.” Written under a pseudonym and at great expense, when it became clear it was a complete failure, Gogol burned all the copies he could get his hands on.

At the age of 19, Gogol decided to move to St. Petersburg, and made it there a year later. Determined to discover an artistic bohemia, he was devastated when instead he found “a graveyard of dreams.” Nonetheless he was intrigued. St. Petersburg, later the cockpit of the Russian Revolution, was a city ruled by the prejudices and snobbery of a pompous bourgeoisie. Bitterly disappointed, but with his heart set on a literary career, he entered a government ministry. Working in the civil service he held nothing but hatred and derision for his coworkers, obsessed with their “trivial, meaningless labors.”

Soon he would wreak his revenge in print.

Evenings on a Farm near Dikanka, his book of short stories (all based on Ukrainian life), gained critical acclaim and he was taken under the wing of the mighty poet Pushkin. Though very different in style, he and Gogol were a revolution in Russia, being the first to use everyday speech in literature and both having a passionate social conscience.

In 1836, Gogol produced his first real masterwork, the play The Inspector General, a scathing satire on the stupidity and arrogance of bureaucrats. The play follows local officials of a provincial town who mistake a young traveler for an expected government inspector and offer him bribes so he will overlook their incompetence and corruption. Bizarrely, its first stage production was given in the presence of the Tsar, an insane move considering the Tsar’s tyrannical nature, and Gogol’s explicit condemnation of his regime. As he left his box after the premiere the Tsar murmured, “Hmm, what a play! Gets at everyone, and most of all at me!” Shortly after this, Gogol fled Russia, traveling through Germany, Switzerland, and France and eventually settling in Rome, returning only sporadically.

While Gogol was in Rome, he received the devastating news of the tragic death of Pushkin. Russia had lost its greatest poet; Gogol had lost his hero and a stabilizing factor from his life. From now on he was alone and facing a future of uncertainty.

In exile, Gogol worked on the work which would destroy him, a book in which he sought to single-handedly solve all Russia’s social ills. Dead Souls, originally published in English under the alternative title Chichikov’s Journey, is akin in scope and importance to Don Quixote.

The protagonist Chichikov, an ambitious, cunning, and amoral adventurer, travels from town to town buying the names of peasants who have died since the last census using these “dead souls” to gain loans and inheritances. Chichikov’s travels provide Gogol with an opportunity to examine the corrupting influence of serfdom on both landowner and serf, and he excels with remarkably vivid and memorable characterizations. In effect, he brings the people of Russia to life on those pages, and in return, Dead Souls exerted an enormous influence on the public with many of its witty sayings becoming Russian maxims e.g. “However stupid a fool’s words may be, they are sometimes enough to confound an intelligent man.”

Dead Souls was to be the first part in a trilogy documenting Chichikov’s fall and redemption and his adventures through a Russia plagued by moral disorder ending in redemption and salvation. The trilogy was to be nothing less than a bible for a new Russia. Having spent eight years on the first part, he spent ten years on the second, and planned a third. He began to lose his mind while working on the second part, at times defending the authoritarian Tsarist regime, and at others espousing revolution. He suffered a nervous breakdown after a pilgrimage to the Holy land brought an unbearable clash of depression, hypochondria and manic religious fervor. In a vulnerable state, he came under the malevolent influence of a puritanical priest who told him to burn the sequel to Dead Souls. Ten days later he was dead. He’d been fasting for some time and had starved himself to death. Refusing to take any food, various remedies were employed to make him eat — vodka was poured over his face, hot loaves were tied to him, leeches were attached to his nose.

He died on March 4th, 1852 in Moscow, leaving behind his books and chilling rumors that he had been buried alive.