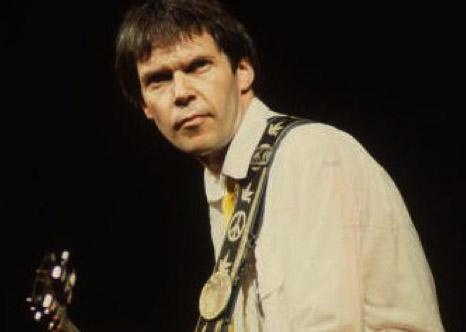 The rock star memoir has emerged as a serious format in the past decade. Exceptional efforts by Bob Dylan, Patti Smith and Keith Richards have lit the way, and news broke this week that Neil Young signed a contract with Penguin for a book, tentatively titled Waging Heavy Peace, to be released late next year.

I rarely allow myself to get excited about a book that hasn’t been written yet, but there are reasons to bet that Neil Young will take this assignment seriously and deliver a book substantial enough to stand next to the examples mentioned above. Two of these authors are among Neil’s own early role models: he’s cited Keith Richards’s Rolling Stones as his greatest musical influence (he and Keith share a you-can-never-be-too-sloppy musical ethic), and has managed his entire career according to the Bob Dylan playbook (give hilarious interviews, and completely reinvent yourself every two years). We can reasonably guess that Neil Young must have been inspired to write his own memoir after reading Bob’s and Keith’s impressive works, and this portends very well for the upcoming book.

I can barely think of any literary references in Neil Young’s large body of work, but his verses are undeniably postmodern, occupying a narrative space somewhere between Richard Brautigan and Raymond Carver. His subject matter includes odd pop culture ephemera, Native-American mythology (a fascination he shares with Jim Morrison, who would probably have also written a great memoir by now if he hadn’t died), and, most of all, the colorful walls inside his own brain. Neil is a masterful, subtle lyricist, clearly trained in the art of haiku, and a sly player in the game of words. His spare, roomy lyrics often present the singer as a plaintive questioner, pleading for answers from an enigmatic other:

Now that you’ve found yourself losing your mind, are you here again?
Finding that what you once thought was real is gone, and changing?

A Neil Young “character” emerges from many of his songs: a proud American drifter, a sincere hippie with a wicked sense of humor, a natural loner fascinated by his ability to connect with the strangers who surround him. This character sometimes resembles Holden Caulfield in the depths of his vulnerability:

Blind man running through the light of the night
With an answer in his hand,
Come on down to the river of sight
And you can really understand,
Red lights flashing through the window in the rain,
Can you hear the sirens moan?
White cane lying in a gutter in the lane,
If you’re walking home alone.
Don’t let it bring you down
It’s only castles burning,
Just find someone who’s turning
And you will come around

When the dream came, I held my breath with my eyes closed
I went insane, like a smoke ring day when the wind blows

His songs are always about feelings, about relationships, about being swept over by or buried in them. This character’s voice is usually not descriptive but active in its context, declarative; the character is playing a role in his stories, and the lyrics are part of some intense private conversation (which is often not going very well).

And yet this character’s attitude is usually sarcastic, self-mocking, careful, aware of the tragedy of decay, as in the early verse that later morphed into an album and movie called Rust Never Sleeps:

Hello, ruby in the dust
Has your band begun to rust?

Neil Young lived an exciting life, and there are awesome stories he can tell: driving from Winnipeg, Canada to Los Angeles in a hearse to join Buffalo Springfield and then Crosby, Stills, Nash and Young; playing at Woodstock; marrying and divorcing a young movie star; embracing punk rock just a couple of years before everybody else caught on; settling down to raise a family with a couple of special-needs kids, nurturing a late-career fascination with trains and alternative cars. I hope this memoir will turn out to be a transformative moment in Neil’s career, and my intuition tells me that it will.

I don’t usually get excited about a book that won’t come out for another year, but this is a book I’ve been wanting to read for, well, decades. I also don’t usually like long books (as my regular Litkicks readers well know), but if Neil Young’s memoir comes in at over a thousand pages I’ll be nothing but happy to enjoy every one. Go, Neil, go!