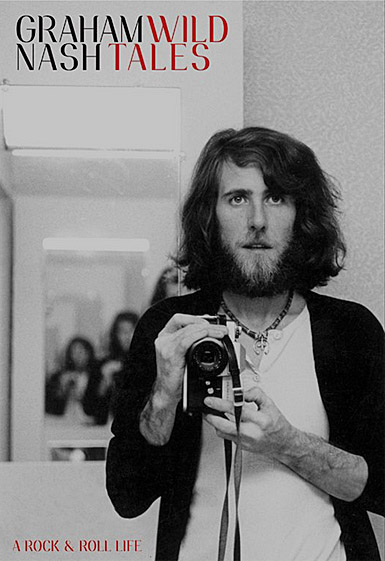 Some of you may wonder why I’m so crazy about rockstar memoirs. Well, I guess it’s because I have so much respect for the body of work the great songwriters and musicians of our lifetimes have created.

From Chuck Berry to Mobb Deep, our best rockers, strummers, crooners and rappers are among the great geniuses of our time. When a worthy musician or songwriter writes a book (thus combining two of my favorite things, books and music) I’ll usually jump at the chance to read it — for the sheer pleasure of hearing their sides of the stories, and for the privilege of plugging into their creative minds.

Graham Nash, a British pop singer with the Hollies who jumped the Atlantic Ocean and became part of the otherwise American and quintessentially hippie assemblage known variously as Crosby Stills and Nash, Crosby Stills Nash and Young and Crosby/Nash, has written a new autobiography, Wild Tales: A Rock & Roll Life

, and of course I gobbled it up. I know of Graham Nash not only as the owner of the sweet, peach-toned high voice in beautiful songs like “Suite: Judy Blue Eyes” and “Wind on the Water” but also as a political activist and even, perhaps, as a notable role model for “sensible” rockers.

Unlike every other member of CSNY, Graham Nash always evoked calm. He never become a drug fiend (that was Crosby), never showed up onstage looking bloated and dazed (that was Crosby and Stills), never swirled for years in solipsistic head trips producing incomprehensible albums (that was Neil Young, whose quirky memoir Waging Heavy Peace: A Hippie Dream I also recently reviewed).

No, Graham Nash was always the normal one, and nothing in his genial and intimate memoir changes his milquetoast image. But what’s wrong with being a milquetoast hippie, especially when you’re so good at it?  In his wonderful career, Graham Nash wrote “Our House” and “Marrakesh Express”, loved Joni Mitchell, became an urgent voice for ocean conservation, against nuclear proliferation and against war, and also found lasting love and raised a happy family of apparently well-adjusted people.  He seems to be blessed with a truly gentle personality, and it probably helped him survive his peak years of heavy fame that his favorite rockstar indulgence was marijuana rather than cocaine — though, as Wild Tales reveals, he sure did do a lot of coke, mostly along with Crosby and Stills and Young.  (One wonders if they did their lines in name order.)

As a peaceful soul amidst the tumultous 1960s Haight-Ashbury and 1970s arena rock scenes, Nash shares some personality characteristics with John Lennon, who also came from a poor family in rough Northern England.  Nash and his first band the Hollies run with Lennon and the Beatles in the early chapters of this book — however, surprisingly, neither the Beatles nor Bob Dylan nor the Rolling Stones nor the Grateful Dead nor the Who are cited as significant inspirations in this memoir.  Nash does not also often mention or notice any of the fellow smooth harmony bands who followed in CSNY’s giant footsteps, like the Eagles and America.

But Nash does have praise to offer for a selected few: the Everly Brothers, Gene Vincent, Elvis Presley, Lonnie Donegan, Buddy Holly. Of contemporary influences, he is most impressed by Stephen Stills, Paul Simon and Joni Mitchell, who he was deeply attached to.

The chapters about Graham Nash’s relationship with Joni Mitchell, which played out while they were both busy becoming major stars, may be the most moving parts of this book. Though she eventually dumped him with a curt note (how Joni of her), he writes about her in Wild Tales with near worshipful affection. He declares her to be more brilliantly talented than anybody else he worked with, including himself and his bandmates. (And, in fact, when I listen to “The Hissing of Summer Lawns”, her best album, I must say I agree, though Neil Young is at the same level.)

Neil Young seems to be Nash’s least favorite member of Crosby Stills Nash and Young, though the mild-mannered Nash is never nasty about it.  The closest he gets is this funny line, as he explains his rationale for a brief reunion with the Hollies in the 80s:

No freebase. No egos. No Neil Young.

Beyond that, the only time in this entire book that Nash sounds angry is in the divisive late 1970s when somebody suggests that Crosby Stills and Nash do a benefit for President Jimmy Carter. That wasn’t going to happen, Nash says.

Trust me on that.

Wild Tales is a pretty good rock memoir, though perhaps not as artistic as Chronicles by Bob Dylan, nor as cheeky as All the Rage by Nash’s fellow American Brit Ian McLagan of the Small Faces. The author scores high for self-honesty, as when he frankly admits that many of the CSN and CSNY reunions since the 1980s were motivated by need for money.

However, I saw a Crosby Stills Nash and Young reunion at Madison Square Garden in 2000. It was an evening of killer acoustic and electric sets, long and remarkable.  If they were playing for money, they earned it that night.

Graham Nash’s humility also comes out in the middle of the book after CSNY blast out a recording of Neil Young’s “Ohio” as fast as they can after the Kent State massacre that inspired it.

The want to rush the song to the radio stations, but their record company doesn’t understand what CSNY is trying to do, and complains that they will kill the momentum of their fast-moving single “Teach Your Children”, written by Graham Nash.  But Nash insists they pull his own song in order to get “Ohio” on the radio.

This story has an ironic edge today. As good a song as “Ohio” was, Nash’s “Teach Your Children” stands as an even better memorial for the 1970 killings of student war protestors at Kent State University.  The song, which deftly turns from “teach your children well” to “teach your parents well”, is now more of a classic than “Ohio”.

Graham Nash and David Crosby stopped by Occupy Wall Street a couple of years ago, and sang “Teach Your Children” with a crowd at Zuccotti Park.