Getting To Know Mo Yan 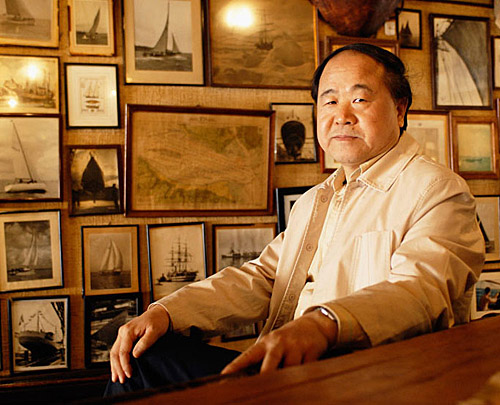 There really is only one literary award that awes me. The Pulitzer prize? Everybody gets one eventually. National Book Award? Too clubby for my tastes. But the Nobel Prize for Literature is usually something special, and has by far the best track record of every major literary award.

I’d love to tell you all about Mo Yan’s novels. But I’m going to level with you: I don’t recall ever hearing his name before today, and I also still haven’t found the time to read Tomas Transtromer (2011), or even Herta Muller (2009). I’m going to get to all of them eventually, but I’m just running a bit behind.

However, I can point to two people who have read Mo Yan before. First is M. A. Orthofer of the Literary Saloon, who was lukewarm about The Change in 2010. Next is a writer who really should have won the Nobel Prize himself, John Updike, who considered Mo’s Big Breasts and Wide Hips in the New Yorker in 2005. Like Orthofer, Updike is clearly not won over wholly by Mo Yan’s bombastic style, but suspects that his work may be valuable for the significant truths it reveals about its own society. Updike writes:

Professor Goldblatt, in his introduction, explains, “In a relentlessly unflattering portrait of his male protagonist, Mo Yan draws attention to what he sees as a regression of the human species and a dilution of the Chinese character. Amid so much slapstick mayhem and mammary lewdness, this moral risks being lost. What does bear in upon the exhausted reader is the crushing misery of Chinese existence in the last century.

I’m planning to dig in and evaluate this author myself. After I get done with Muller and Transtromer.

UPDATE: A random Google search led me to the discovery that, even though I have never read a Mo Yan book, I had in fact written about him indirectly in a 2008 review of the New York Times Book Review. Here’s what I discovered I wrote:

I had more trouble with Jonathan Spence’s abstruse article on Mo Yan’s Life and Death Are Wearing Me Out. There’s a whole lot of activity here regarding pig carcasses (and an awful illustration of a flying, oozing pig carcass that looks like a rejected design for a Pink Floyd concert poster). I read the article twice and I still don’t understand what this book is about. Spence’s dry, academic delivery doesn’t help. He tells us that the book’s main character transforms himself into five different animals during the course of the narrative, then remarks that “Such a fictional procedure is, of course, fraught with difficulties of tone and narration”. Indeed.