Philosophy Weekend: Military Spending in the USA is a Big, Big Problem 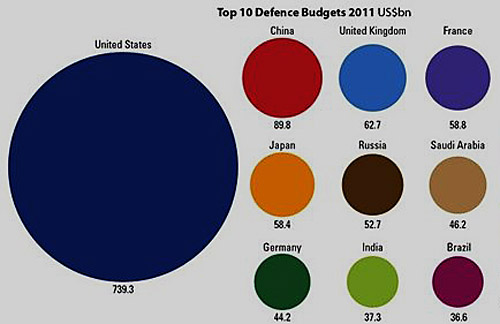 Some truths have a tough time landing. They hover overhead, drifting uncomfortably in the air. People stare up at these truths, squinting. “Yeah, that looks like a truth.” “Hope it doesn’t get any closer.”

One of these truths is hovering heavily over our heads right now, here in the United States of America. Our government spends an incredible, ridiculous, unsupportable amount of money on the military. The chart above (chosen by Andrew Sullivan as the #1 nominee for 2012 chart of the year) shows how much the USA spends compared to the other powerful countries on the planet. This certainly is the #1 chart of the year, and the data point about our overspending is the single most important data point we need to discuss as our Congressional debate over taxation and deficit spending proceeds.

But this truth — the truth that we spend way too much on preparations for war — has no home. It’s a homeless truth. Andrew Sullivan found the chart in a Mother Jones article aptly titled “And You Wonder Why We’re Broke?“, and Mother Jones is an excellent liberal/progressive publication that supposedly has some influence within our Democratic party. But our Democratic party establishment won’t touch this truth, because proposals to cut military spending will not help win elections and will feed into the damaging misconception that liberals are weak on defense.

Meanwhile, don’t even bother asking if the Republican party establishment will go anywhere near this truth. Ron Paul will, which is the only reason I sometimes like Ron Paul, but none of the so-called “fiscal conservatives” who want to “get tough on spending” will. Why? Well, of course, because Ronald Reagan. That’s usually where the discussion ends, if a Republican politician is anywhere nearby.

It’s particularly galling when self-proclaimed “fiscal conservatives” refuse to discuss cuts to military spending while also criticizing entitlements and the welfare state. In fact, military pay and benefits is a form of entitlement, and it has already taken root within American society as a quasi-welfare state. It’s how we send kids to college, how we provide free or subsidized healthcare to countless military families, how we pay monthly checks to retirees. But this is a form of welfare that rewards conformity over individuality, that literally demands cultural and political indoctrination in return for financial sustenance. And yet, incredibly, so-called conservatives who claim to despise welfare states and fear cultures of government indoctrination cling to the military welfare state as if it represented the best of what this country can offer.

Our tangled national mindfuck over defense spending needs to end, but we citizens and bloggers and journalists and street protestors will have to fight for this change ourselves. None of our politicians will lead the way. They are stuck. The important fact that we need to significantly cut our military spending to help balance our budget hangs in the distant sky, barely visible through the thick, thick fog.

But even our cultural influencers and citizen protestors often appear to be meek or confused about the question of military spending. Can they possibly really believe that we need to spend six times more than every other country in the world in order to keep America safe? If not, why won’t they speak up about this?

When I try to talk to either liberal or conservative friends about this, I hear the same murky, mystified responses. Nobody believes it’s possible to cut military spending, even though our Congress is currently in an absolute spasm over how to cut spending in general, and even though military spending is our biggest cost. The level of popular pessimism and defeatism about this issue is tremendous.

We fight for the environment (against industrial pollution, against fracking, etc.). We fight corrupt capitalism and plutocratic abuses (the Occupy Wall Street movement was especially strong in this area). We fight for human rights, for the right to health and reproductive privacy, for the right to marry. So why can’t we fight against the culture of militarism and its terrible costs, against the harm it does to our economy, our culture, our standing in the world?

But I’m going to keep speaking up about this, even though I feel like I’m shouting into a cloudy void, and I hope you will too. The truth that the USA is addicted to military overspending, and that this (not Social Security or Medicare) is the single greatest cause of our budget problems needs to get out there, needs to become a meme. I believe we can make this happen. There’s this great idea called pacifism. It’s not dead yet.