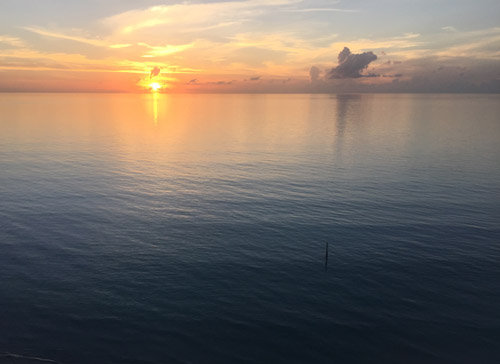 I’ve been communing with a view of the Atlantic ocean all summer.

I don’t get to spend as much time out there swimming in it as I’d like, because I’m a workaholic no matter where I live. But the view out my window helps keep me centered. The great ocean sparkles and gently churns as I plug away on endless coding errors, architectural conundrums, bug reports. The gorgeous wide sky beckons to me too, swirls of orange fire in the morning, steady pale blue at noon, dusty maroon and magenta in the late afternoon.

I drifted down to southern Florida this summer for no special reason, except that an empty apartment became available to me, and my remote location job (for a very hip and innovative magazine/digital publishing company based in the Midwest) allows me to work anywhere I want. I’ll be back in New York City in September, but I’m enjoying the getaway and the mellow Miami lifestyle. Well, I haven’t had any margaritas yet, nor smoked a good cigar … but I have played a bit of poker, done a lot of swimming and listened to a lot of Reggaeton, and I guess I’m getting a decent tan. 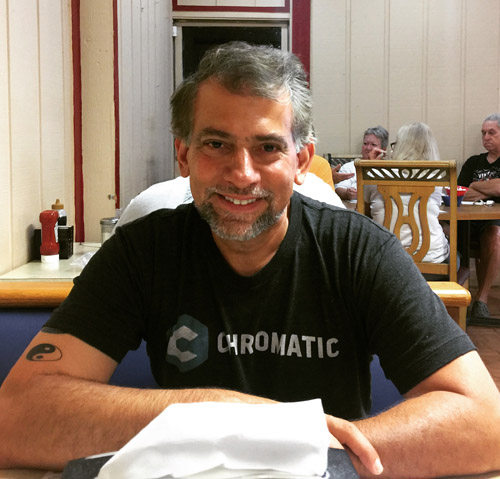 Some of you may remember the memoir of my technology career in the Silicon Alley years that I drafted on this blog several years ago. I got a great response to this work in progress, and I’m still planning (yes, really, I am!) to do a final draft of this memoir and publish it as a book. This autobiography covers my life and work from 1993 to 2003. Since then, I’ve remained fully in the game as a web developer as well as a literary/political blogger. On the web development side, I guess the technical challenges that vex me and my co-workers have only become more overwhelmingly difficult and paradoxical since 2003.

Back then, we wrote server-side software in languages like Java or PHP. Today, a website is an intricate dance of server-side and client-side frameworks. Javascript is on both sides, and so is the kitchen sink. As always, I’m in love with the complex ecosystem of open source web frameworks and shared code, and I also hate and despise the structural flaws that make this work so difficult: the overwhelming excess of competing and incompatible technical standards, the bloated shovelware libraries we are forced to integrate from revolving door business partners, the inevitable lack of elegance and simplicity that results from fast schedules and ever-changing priorities. But, well … “this is the work I chose”, and after surviving literal decades in this web/tech sector I think I’m finally starting to reach a point where I can smile about it all and say “it is what it is”. Looking out at the ocean helps.

One thing that often keeps hard-working techies from falling off the deep end is the simple fact that solving problems feels good. It’s a form of pleasure. If I write a new Node.js service and the JSON spits out perfectly on the first try, or if I install a new Drupal contrib module and follow the README directions and everything just falls perfectly into place — well, this brings a little rush of joy, and this little rush of joy keeps me alive. I wonder if productivity experts who study the efficiencies of various workplaces think much about the way engineers or scientists (or, really, I bet anybody in any profession) make progress by chasing these moments of emotional release.

Solving any kind of problem is an ecstatic experience — and sometimes after I snap my MacBook closed to end an exciting day at work I feel so hyped up from this ecstatic charge (as well as, let’s admit it, all the caffeine) that I need to go find some other way to feel that same release. Maybe that’s why I like cushion my web dev workdays with simple iPhone games like Words With Friends and 2048 (I’m still trying to get to 8192!) that give me the same small moments of pleasure, in measured and repeatable doses.

Yeah, but … dear friends, technical challenges are not the serious challenges we face in 2017. Neither are my ongoing games of Words With Friends and 2048. I’m not just a software developer — I’m a writer and a political activist, and let’s face it, the world is looking pretty ugly from this point of view these days. We’ve got big problems that can’t be solved the way we can solve coding errors.

These problems are so big, sometimes looking out at the ocean doesn’t even help.

And maybe that’s why I feel like I ought to start writing again, and end the period of quietude (or is it a period of laziness, or a descent into defeated silence?) that has settled over Litkicks since April, when I last published a blog post here. I can’t keep fixing the little problems at my job and ignoring the big problems on my planet.

A hopeful thought occurred to me recently, as I was staring out my window thinking angry thoughts about angry shit going on all over our angry world. Maybe, maybe, just maybe … maybe the reason I’ve been feeling so defeated as an American liberal, as a pacifist and as a political philosopher is that I’ve temporarily forgotten what it is I’m good at in this world.

Structured thought. It was in November 2015 that I launched Pacifism21.org, my first attempt at a website devoted to a cause that means everything to me. In retrospect, my timing was rotten. Donald Trump was kicking off his campaign to make America ugly again at exactly the same time. I have felt alternately bewildered and enraged ever since.

But my long experience as a coder has trained me to persist. When a problem is really tough, you sometimes need to step away and get back to it. I have stepped away. I guess me being down here in Florida is an advanced form of stepping away, in one sector of my life. Neglecting to put in the effort to keep writing here on Litkicks and on Pacifism21 is another form of stepping away.

I woke up this morning and the ocean was still there. I guess I’m still here too. And I think I’m going to start writing again.