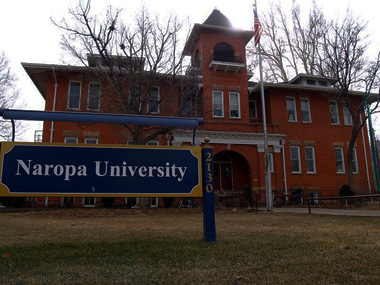 When I heard that W. S. Merwin had received the 2005 National Book Award for Poetry for his book Migrations, I couldn’t help but think back to the first time I’d heard his name. We don’t often hear stories about distinguished nature poets that involve fist fights, broken bottles and nudity, but W. S. Merwin was the center of an astonishing incident at a Tibetan Buddhist seminar that descended into just such debauchery. The controversy that followed has been largely forgotten, but it occupied the poetry community for several years in the late 70’s, pulling the likes of Allen Ginsberg, Robert Bly, Kenneth Rexroth, Ed Sanders, Ed Dorn and Tom Clark into its vortex.

It all went down at a seminary associated with the Naropa Institute, a Tibetan Buddhist outpost in Boulder, Colorado, which hosts the Jack Kerouac School of Disembodied Poetics, founded by Allen Ginsberg and Anne Waldman. The head of the Naropa Institute in 1975 was the charismatic teacher Chogyam Trungpa Rinpoche, whose most famous disciple was Allen Ginsberg. Because of Trungpa’s exalted reputation, there was a waiting list for his interactive lectures and training sessions, and apparently W. S. Merwin pulled some strings (he was already at that time a well-connected poet) to get an invitation for himself and his girlfriend, Dana Naone.

It seems their desire for special treatment annoyed Trungpa (who had a reputation for unpredictable and impulsive behavior). Trungpa also seemed to bristle when Merwin and Naone expressed strong opinions about the content of the Hinayana, Mahayana and Vajrayana Buddhist source materials, objecting especially to the bloody war imagery in some of the traditional Tibetan Vajrayana chants. Trungpa did not believe a trainee should talk back to a guru, even if the trainee was a celebrated poet.

The Naropa group threw a wild Halloween party, and Trungpa presented a twist: the poets, trainees and other attendants would celebrate Halloween not by putting on costumes but by being stripped of them. The guru, apparently drunk on some sort of spiritual libation that probably did not come from Tibet, walked around the party floor pointing at partygoers, and when he pointed at somebody his assistants would pounce on that person and strip off their clothing. “Chop them up,” he would say.

However, Merwin and Naone, having scoped out the scene, made the strategic decision to hide in their room. Trungpa noticed this and sent for them, but they refused to join. Trungpa then sent a larger contingent to retrieve them, this time with the message that they were ordered to join the party. Merwin and Naone, again, refused. At this point Trungpa declared to his faithful attendants that they must use whatever force was necessary to retrieve the wayward guests.

It may be difficult to picture a mob of half-naked, half-costumed hippie Buddhist poets forcing their way into another poet’s private room by breaking windows and smashing down doors, but I urge you to picture this, because sources state this is exactly what happened. Apparently Merwin tried to pull a Clint Eastwood move by breaking a bottle and using the jagged remains as a weapon, and all accounts state that several of the scufflers ended up with bloody limbs (though, thankfully, there were no life-threatening injuries).

Finally, Merwin and Naone were dragged screaming and crying into the party, where Trungpa yelled at them, strangely singling out Naone, a Hawaiian, for failing to respect her Asian heritage by following his direction. At his command, the mob descended upon Merwin and Naone and removed their clothing, leaving them naked and sobbing in each other’s arms in the middle of the room.

The story ends at this point, and the controversy begins. Naone had shouted for somebody to call the police during the horrific incident, but for some strange reason Merwin and Naone did not immediately leave the seminary grounds, choosing instead to stay several more days for Trungpa’s remaining lectures (which indicates that they were probably traumatized and humiliated beyond their better judgement at the time).

Slowly, other poets began to shout for justice, among them Robert Bly and Kenneth Rexroth, who called Trungpa an obscene fraud. The Naropa Institute’s funding from several non-profit sources, including the USA’s National Endowment for the Arts, was threatened. Allen Ginsberg had not been at the party, but as the spokesman for Naropa’s poetry school, a well-known follower of Trungpa and everybody’s good friend, he quickly became a central figure in the controversy.

Ginsberg was asked to repudiate Trungpa, his guru, and he would not do so. In various interviews, he repeatedly tried to find the words to defend his teacher’s actions, and continued for years to try to walk the line between both sides in this difficult battle.

Trungpa’s reputation never fully recovered from this debacle, though he remained active as a religious teacher and activist for Tibetan independence until his death in 1987. Dana Noane continued to write poetry, and edited a volume of modern Hawaiian poetry, Malama, in 1985.

Although the strange incident between Trungpa, Merwin and Naone was covered in Harper’s Magazine and The Paris Review and is discussed in Barry Miles’ biography of Allen Ginsberg, the story has slipped from notice in recent years, despite W. S. Merwin’s rising stature as a major voice in American poetry has continued unabated.

Certainly both law and rationality side with Merwin and Naone in this battle, but it’s a story that makes nobody look good. Merwin comes across as a Buddhist dilettante, pulling for special favors at a religious retreat, refusing to follow the teacher’s commands, and then failing to stand up to the teacher after the horrific treatment at the Halloween party. He made one public statement about the controversy in 1977:

My feelings about Trungpa have been mixed from the start. Admiration, throughout, for his remarkable gifts; and reservations, which developed into profound misgivings, concerning some of his uses of them. I imagine, at least, that I’ve learned some things from him (though maybe not all of them were the things I was ‘supposed’ to learn) and some through him, and I’m grateful to him for those. I wouldn’t encourage anyone to become a student of his. I wish him well.

Merwin’s National Book Award honor in Manhattan came almost exactly thirty years after the Naropa bash that went out of control. According to all reports from the award ceremony, everyone’s clothes stayed on.