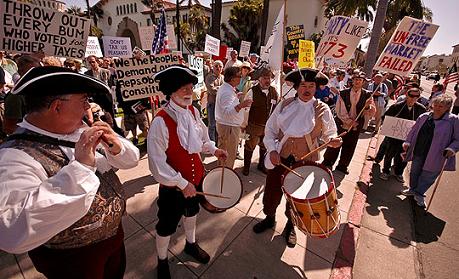 Andrew Sullivan recently posted a quote from William James (my own longtime fave philosopher) so relevant to our times that I’m reposting it in full:

“Our reason is quite satisfied, in nine hundred and ninety-nine cases out of every thousand of us, if it can find a few arguments that will do to recite in case our credulity is criticised by some one else. Our faith is faith in some one else’s faith, and in the greatest matters this is most the case.

Our belief in truth itself, for instance, that there is a truth, and that our minds and it are made for each other, — what is it but a passionate affirmation of desire, in which our social system backs us up?”
– William James, ‘The Will to Believe’, 1896.

Strip down any of the hot political debates of the day — health care, Wall Street, global warming, Afghanistan — and what you’ll find at the center is not principle but willful desire. We prove that we know this when we criticize our opponents for their shallow, self-serving views. We’ll say, “they just believe that because they want to believe it”. It’s sometimes the only explanation that makes sense. Alas, the criticism holds up equally on all sides, as our own opponents will also be happy to point out.

But this does not mean that substantive political debate is pointless, nor impossible. I enjoy a spirited political discussion, like one I had this past weekend during a break in a friendly poker game, when six of us stood on a balcony and tried to solve the problems of the world. I’m convinced that these types of impromptu bullshit sessions truly help us, because our ideas get challenged, because we are called upon to flex our theories at least enough to pass the test of public communication: can we explain what we’re thinking clearly enough that others will understand it at all?

This can be a satisfying and edifying process, but all too often a lively political debate between friends feels like a guilty pleasure. Eventually somebody in every crowd will plant the familiar notes of discouragement: it doesn’t matter what any of us say, because we will all go on believing what we want to believe anyway. We’re just amusing ourselves. Nobody really listens, nobody really cares.

This may even be true (William James certainly stands behind it). But something valuable is happening even when we fail to convince each other to change our beliefs. Not long ago, I concluded an email and text message debate about Roe vs. Wade that lasted nearly two years. My opponent was a friend and former co-worker, a software engineer like me, and a devout intellectual Catholic. Our long exchanges consumed a lot of effort, and we often became angry at each other. In the end, neither of our belief systems budged. But I was able to gain an understanding of how his belief system was constructed, and I hope he was able to gain a better understanding of mine. When the long discussion finally ended we were both exhausted, and we haven’t picked up a new topic since. But I’m convinced we accomplished something during this exercise, even though neither of our opinions changed.

Like many of my fellow liberals, I’ve been watching the so-called Tea Party movement with some bemusement lately. I’m not very sympathetic to most of the conservative ideals these protesters stand for, but I will admit to being impressed by the energy and creativity (if not the good spelling) I see at their events. I like it that these protesters value spontaneity and quirky self-expression, that they reject the solemn paternalism of banal conservative politicians like Mitt Romney, Mitch McConnell and John McCain for more imaginative and exploratory approaches. I wish I could find some Tea Partiers who wanted to debate me — not in a shouting match, but in a pointed exhange of ideas. I think it’d be worth the exercise.

Strangely, I seem to be the only one among my liberal friends and family members who feels this way. Many liberals I know would rather scoff at noisy Tea Party conservatives than credit them with any level of knowledge or intelligence. This is an unfortunate choice. It amounts to a position of cultural snobbery that’s just as unfair as the racist position that critics of the Tea Party have perceived at the core of that movement. It’s all too easy to characterize a large movement based on its worst elements. Instead, we should always credit our ideological opponents with intelligence and honesty, and we should always be willing to meet them in an open-minded exchange of ideas.

In this spirit, I recently watched Glenn Beck’s 5 pm news show on Fox News for several days in a row. Of course I disagree with Glenn Beck on nearly everything in the world, and yet I was impressed by the rigor of his arguments and the amount of historical research he laid out each hour. He’s up there riffing on Woodrow Wilson, Teddy Roosevelt, Joseph Stalin, Chairman Mao, Mahatma Gandhi — I don’t agree with the way he spins these names, but I can’t deny that he’s clearly done his homework (indeed, this may be the only thing Glenn Beck and I have in common: we’re both history nerds).