I have a lot of respect for Art Spiegelman, a manic-depressive comic strip artist and writer who holds nothing back from his craft. In the great self-effacing tradition of Robert Crumb, a Spiegelman comic is always “too much information”, splattering personal urges and anxieties and weird notions around like a loose garden hose. But the best confessional comix artists have the artistry and wit to make the splatter beautiful. Spiegelman’s graphical autobiography promises to be a deeply personal document, and it’s off to a great start with the first two sections.

One reason I relate to Art Spiegelman is that he grew up about three and a half blocks from where I live now, in sunny Rego Park, Queens. I know this because Spiegelman drew a map of his street as part of the back cover of his signature work, Maus. Maus is the terribly sad and odd true story of Spiegelman’s parents (who could have been role models for George Costanza’s parents in Seinfeld, except reality beats fiction). Both were holocaust survivors, but Spiegelman’s father adopted an infuriatingly contrary, almost cheerful tone about the experience, which apparently taught him important survival skills (but also made him cruel to women, emotionally dense with his son and generally crazy). Spiegelman’s mother, on the other hand, never recovered from the shock of the camps. She committed suicide when Spiegelman was a young man. He had been recently released from a mental hospital when he walked home one day to find police cars outside his house. This was how he found out about his mother’s suicide.

He told this story early in his career, and included it as part of Maus. One of the illustrations shows young Spiegelman emerging from a subway platform in striped pajamas (evoking both a mental hospital and a concentration camp at the same time) as he begins the tragic walk home. Since I know he lived in my neighborhood, it’s easy for me to recognize his subway station, the 63rd Drive stop on the G, R and V line. This is what it looked like several decades ago, according to Maus: 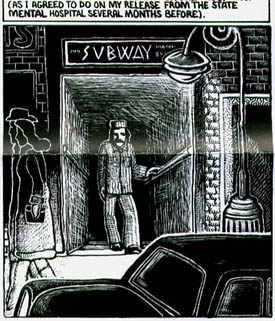 Decades later, they still haven’t replaced the sign. I took this picture a few weeks ago: 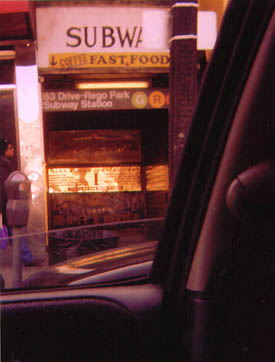 Earlier last year, I also wandered over to the house where the “Maus family” lived, according to the book. I was looking for a particular address, 63-12 Carlton Street in Rego Park, an address that is clearly legible in this drawing: 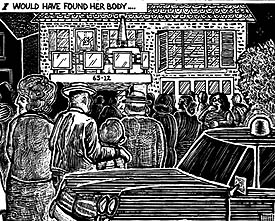 And there it was, at 63-12. The Maus family is long gone, and I don’t know who lives there now. But the house has barely changed at all. 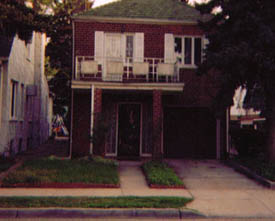 All this history, all this sadness, right in my part of town. It all hits me close to home, in a few different ways.