An Interview with Matthew Eck 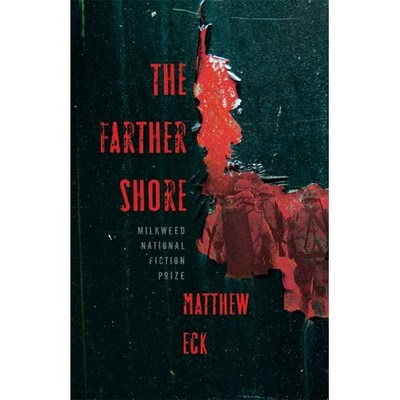 The Litblog Co-op has chosen Matthew Eck’s debut novel The Farther Shore as the Winter 2007 READ THIS! Selection. This war story by a young veteran of US actions in Haiti and Somalia is one of the most impressive books I’ve read this year, and I was happy to have a chance to interview the author via email last week.

Matthew: I joined the army because I always knew that I wanted to be a writer. I’d been reading Joseph Heller and Kurt Vonnegut and Tim O’Brien and Ernest Hemingway and it just seemed like the right thing to do to gather life experience and meaning and understanding all those cliches. But the GI Bill was a huge attraction as well. And I knew that I wanted to go to college one day as well. I actually enlisted for four years because I wanted as much of the GI Bill as I could get, and my reasoning at the time was this: high school went by pretty fast. I also joined because I never thought at 18 that I’d be in a war. At 18 death seems so far away. I felt invincible. Somalia was one long memento mori.

Levi: I hope your real-life experience in Somalia was not as harrowing as that depicted in The Farther Shore. But would you mind sharing some details about what you personally experienced when engaged in actions overseas?

Matthew: I appreciate that “hope”. It wasn’t as harrowing as that depicted in the novel. But after I wrote that book I felt like I owned Joshua Stantz’s experience. These days the line between the reality of my war and the reality of Joshua’s war runs a bit blurry.

We were mortared a lot in Somalia. It was surreal early on. I worked during the night most of the time I was in Somalia so it was rare that I was scared out of sleep.

I was telling a story to a friend about the war while I was working on my novel. I was telling this story about a mutual friend and watching as mortars landed all around. About how I remembered watching as bright orange bits of burning shrapnel sprayed about him. And my friend stopped me and said, “That was you. That wasn’t Zoldak. That was you.” It all came back and my heart just dropped. I remembered it all.

“Zoldak and I were working at the “hot point” when mortars started landing in the camp and we jumped out of our Humvee and hid in a trench that ran the entire length of the runway. When the mortaring stopped we were walking back to the Humvee when I noticed that I didn’t have my radio on me. I was walking back to get it when my friend yelled at me and I turned around to see this luminous green round flying at me. I took off running for the trench and it was like I was underwater, the world was going so slow. I dove into the ditch at about the same time as this green little glowing round started its decent into the same trench and only a few feet away. I remember vividly thinking in that moment of Wile E. Coyote. I remember thinking, this is un-fucking real. This thing just followed me down here. It landed a few feet away and bounced a couple of times and just sat there glowing. It wasn’t a mortar it was a flare. And I just sat there staring at it. I was shaking as I climbed out of the trench, again forgetting the radio. I turned to jump back down in the trench for the radio when three mortars landed in quick succession around me. That orange flash, “the big spooky,” someone called it, all that bright orange burning shrapnel flying about me. When the mortaring was over I slowly crawled back down into the trench and just sat there until my friend walked over. That moment led to the line in the novel about how you never know where to stand in a war. I should have known to get out of there when I saw that green flare. It was someone gauging the distance for the mortar rounds. They were spotting us.”

In the end the radio was destroyed and the Army seriously considered making me pay for it because it wasn’t on me at the time. That radio did me a huge favor.

Levi: How did you become a writer, and which writers and books have inspired you the most?

Matthew: Obviously the writers that influenced me the most with this novel are all those creative writing instructors I’ve had over the years. Kevin Canty and Deirdre McNamer were highly inspirational when it came to the writing of the novel. I took a novel workshop with each of them at the University of Montana and they helped me tremendously. I really learned the workings of a novel from the two of them. Kevin was reading my stories and knew I was writing about war and he bought me a book for my 30th birthday, a copy of The Red Cavalry Stories by Isaac Babel. Kevin told me that if I wanted to write about the absurdity of war I needed to read Babel. He was right. But most of what I learned from Kevin and Dee, I learned from their writing.

I read James Crumley’s One to Count Cadence right before I moved to Montana for my MFA. That’s one of the most beautiful novels about war I’ve ever read. Then one afternoon in Missoula I’m drinking at a bar and in walks James Crumley. I couldn’t muster the courage to go over and tell him how much that book meant to me, then my wife just walked over and introduced herself. I walked over and Jim and I hit it off immediately. That man taught me a lot about writing and being a writer over Coors at Charlie B’s in Missoula. I heard him say two of the most beautiful things I’ve ever heard. Right after his great friend James Welch died, I walked into Charlie’s and he was sitting at the end of the bar by himself. I sat down and I could see that he’d spent some time crying that day. Then he said about the loss of one of his greatest friends, “I feel like I’ve been gut-shot and left alone to die on a ridge.”

The other is, and he said this to me just last night, he was telling me that he needs heart surgery soon. And he was explaining how he’ll have to travel to Seattle for the surgery because the heart center in Missoula just doesn’t have the right equipment. He said, “The irony is that my heart’s too big.” Jim has one of the greatest smiles ever. Big as a bear.

The other big one: Walter Kirn. Walter is a great friend. I first met him in a workshop he was teaching. People were offering up advice for a story when Walter stopped them and said, “You don’t need a workshop, you need an editor.” Walter asked to look at a draft of my novel. A week later he said he wanted to mail it to his editor at Doubleday. In my eyes Walter is a huge reason The Farther Shore was published. Walter was championing me when I needed it the most. And just like others, I learned even more from Walter when I started reading his books closer. All of his books are gorgeous. The man’s a fucking genius. Let’s just leave it at that.

Shakespeare and Dickens. I can’t get enough of them. It’s a wonderful moment when you connect with either of them, when you see the beauty and the anguish there.

The biggest influence for my next book has been my editor at Milkweed, Daniel Slager. Watching him edit The Farther Shore was absolutely beautiful. He found the heart of the novel and edited it true. Watching him help my novel and my writing taught me to appreciate the editor and writer relationship.

Levi: There have been several recent novels about Americans engaged in foreign wars, but yours seems to me the most minimalist, and the most intensely focused of all those I’ve read. Was this a desired effect? Does “stripped down” prose come naturally to you, or did you have to work hard to achieve this?

Matthew: I always knew that the novel had to be immediate and intense in order for the audience to go through all of the trials and tribulations with Stantz. I’d write those sentences out as long as possible and then edit them down. That’s just Stantz’s voice.

Levi: I could find very few explicit literary references in The Farther Shore, so I was pleased and surprised when one of your characters suddenly spoke about a classic writer who had been shocked on his wedding night to discover that women had pubic hair. What was Pre-Raphaelite John Ruskin, of all people, doing in Somalia? Do the Pre-Raphaelites have special significance to you, or to this story?

Matthew: That’s great. When I was in Haiti an ex-girlfriend sent me some odd little book about sex and that was in there. You caught me on that one. The Pre-Raphaelites, I had to look at that one to spell it out. Perfect. One of the best questions ever.

* * * * *
I was glad to make Matthew laugh, but I still insist there is something about his book (tragic, strange, intense) that resonates well with the Pre-Raphaelite allusion. Please check back with the Litblog Co-op this week for much more coverage of Eck’s fine new novel.‘