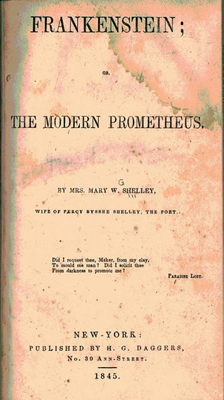 Mary Shelley was born Mary Godwin in London, England on August 30, 1797 to remarkable parents. Her mother, Mary Wollstonecraft, a feminist when feminism was almost unheard of, wrote A Vindication of the Rights of Women in 1792. Her father, William Godwin, a well-known critic of the British government and the founder of modern philosophical anarchism, wrote An Enquiry Concerning Political Justice in 1793. Sadly, eleven days after Mary was born, her mother died of puerperal fever, leaving William Godwin to raise Mary and her older half-sister, Fanny.

Mary’s father believed in the progressive type of education prescribed by philosophers like Rousseau, which emphasized experience over book-learning. He took Mary and Fanny on trips to different places and often invited writers, philosophers, and scientists to his house. These guests included Charles Lamb, William Wordsworth, Humphry Davy, and Samuel Taylor Coleridge. One night Mary got to hear Coleridge recite his poem The Rime of the Ancient Mariner to a roomful of guests. Mary was writing her own stories by the time she was ten years old.

William Godwin remarried in 1801. As is often the case, Mary did not like her new stepmother, but she became friends with the step-mother’s daughter, Jane Clairmont.

When Mary was sixteen, she met a tall, thin, 21 year old aristocratic poet/philosopher named Percy Bysshe Shelley. Percy Shelley had been expelled from Oxford University for cowriting a paper called The Necessity of Atheism, but he didn’t care, because his parents were rich and he was a radical thinker in both poetry and politics. Percy Shelley looked to Mary’s famous father as a mentor regarding liberal, and provided him with financial contributions. Percy was already married to Harriet Westbrook, but he and Mary Godwin were immediately attracted to each other. Mary’s father did not approve of this growing relationship, but he could do little to prevent it. In 1814, Mary and Percy ran off to France with Mary’s stepsister Jane. By most accounts, Jane not only shared in their daily adventures of sailboating and siteseeing, but also in their nightly adventures in bed. Back in England, Percy’s wife became pregnant from someone other than Percy and drowned herself before the baby was born. Mary Godwin became Mary Shelley when she married Percy in 1816.

In 1817, Mary wrote a book about their travels called History of a Six Weeks’ Tour through a part of France, Switzerland, Germany, and Holland, with Letters descriptive of a Sail round the Lake of Geneva, and of the Glaciers of Chamouni. These were times of great romance and adventure, mixed with tragedy.

Mary gave birth to a baby girl in 1815, but the child was born prematurely and died eleven days later. Soon afterward, Mary wrote in her diary about a dream she had, wherein her baby “had only been cold that we rubbed it before the fire & it lived.” Mary gave birth to a son named William in 1816 and a daughter named Clara born in 1817, but Clara died of dysentery within a year and William died of malaria in 1819. The only child born to Mary and Percy that lived to adulthood was Percy Florence, who was born in 1819 and died in 1889. Some literary historians have speculated that these sad losses influenced Mary’s most famous fictional character, Frankenstein, who learns the secret of restoring life.

At some point in the aforementioned travels, Mary’s stepsister Jane had developed a romantic relationship with the famous poet Lord Byron, who lived in Switzerland with his personal physician, Dr. William Polidori. Mary, Percy, and Jane stayed in Switzerland for a while, often visiting Byron and Polidori. One rainy night, the group gathered around Lord Byron’s fireplace to read a French translation of a book of German ghost stories called Fantasmagoriana. Afterward, Lord Byron suggested that they each write a horror story. The end result of this writing challenge was Mary Shelley’s most famous novel, Frankenstein, or The Modern Prometheus. She was only 18 years old at this time.

It so happened around that time that scientists were learning it was possible to use electricity to make dead frogs “jump.” Electricity was a relatively unknown science and some people wondered if just the right measure of current could reanimate the dead. After Mary heard Percy discussing this subject, she says she had a “waking dream” in which she saw “the pale student of unhallowed arts kneeling beside the thing he had put together.”

Frankenstein is the story of a man who tries to be like God and suffers dire consequences for it. Or, it is the story of a man who avoids intimacy by creating an alter-ego who murders his fiance on their wedding day. Or, it is an extension of the legend of Prometheus, who took fire from the gods, gave it to mortal humans, and stubbornly refused to repent, even under severe punishment from Zeus. Or, it is about a narrow-minded society persecuting an unfortunate man-creature for being different from them. With its forward-looking semi-scientific aspect and its epic quotes from Milton’s Paradise Lost, it is apparently about all these things and more. Mary Shelley finished writing Frankenstein in 1817, and it was published in 1818.

Mary Shelley next wrote Mathilda, but this was not published during her lifetime. Three characters in this book resemble Percy Shelley, Mary, and William Godwin, though the story veers into fiction. In the story, Mathilda’s mother dies giving birth to her. Mathilda’s father abandons his daughter, then returns after sixteen years, only to confess that he has incestuous feelings toward her. The father ends up committing suicide.

Shelley’s novel Valperga was published in 1823. Set in 14th century Italy, it is the story of woman’s blind love for a man and her disillusionment as she gets to know him better. Valperga was written while Mary and Percy actually lived in Italy.

While still in Italy, Mary Shelley experienced yet another tragedy. Percy Shelley and his friend Edward Williams were sailing a schooner in from Leghorn to Lerici when the weather became harsh and the boat sank. Both men drowned.

In an effort to overcome her grief, Mary published a collection of her late husband’s greatest poems and added biographical information which tended to emphasize Shelley’s good qualities and overlook his faults.

In 1924, Mary wrote The Last Man, which is set in the future – a doomsday kind of future. The Last Man has been called an experimental combination of science fiction and gothic horror (not unlike Frankenstein). It is notable that while most writers looked back to myths, legends, and folk tales (William Polidori, for example, responded to Lord Byron’s story challenge by writing The Vampyre), it took the young firebrand Mary Shelley to modernize horror. The hero of The Last Man bears a striking resemblance to Percy Shelley.

In 1850, Mary Shelley began having difficulty speaking and numbness in one leg. The symptoms indicated a brain tumor. Her condition grew worse and she died in London on February 1, 1851.