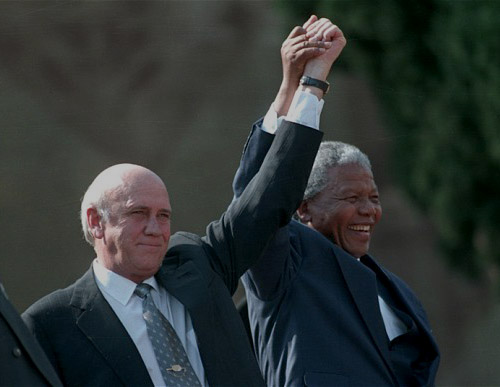 I wonder if all the glory that’s been heaped upon Nelson Mandela since his death on Thursday is hurting his feelings. This level of adulation has got to be hard for anyone to endure, living or dead.

Well, the glory is well-deserved, but just for the sake of originality I’d like to celebrate two South Africans today: Nelson Mandela and his political opponent and partner F. W. de Klerk, the last white President of South Africa, who had the courage to take the steps to negotiate an end to apartheid. De Klerk’s courage was very different from Nelson Mandela’s, but it’s no less worthy of praise.

Unlike Nelson Mandela, Frederik Willem de Klerk didn’t really look like a hero. He was 18 years younger than Nelson Mandela, but his body shape and physical presence made him look 18 years older. Mandela spent 27 years in jail; de Klerk spent nearly his entire life as a politician in the government that kept Mandela there. Mandela was the son of a Xhosa chief; de Klerk’s last name means “the clerk”.

But when de Klerk was elected President by his troubled nation’s white minority in 1989, he moved fast and decisively to open discussions with the outlawed African National Congress, to finally release Mandela from jail, to remove racial barriers to voting and turn South Africa into a true majority. He initiated a national referendum on March 17, 1992 to end apartheid — a referendum in which, of course, only white South Africans could vote, because it was only by acheiving a “Yes” vote that all South Africans of all ethnic backgrounds would be granted the right to vote.

This was a political moment of M. C. Escher-like reflectivity, as well as a moment of drastic cultural importance for the nation and for the world. The “Yes” side won by a landslide: 68.7% to 31.3%. From this point on, the brighter future of South Africa was assured.

History has a way of scaling over itself with a patina of inevitability, and I’m not sure if historians of the future will be able to understand how truly surprising South Africa’s ascent to racial justice and decency was at the time it took place. History may also fail to capture how impossible it once seemed that peace could ever come to this violently torn nation, which had been suffering from the ravages of colonialism for centuries. Ten years before the referendum to end apartheid, it seemed likely that apartheid would never end peacefully.

There seemed to be two choices: violent revolution, or the terrible status quo. Brutally depressing novels like J. M. Coetzee’s Waiting for the Barbarians

captured modern South Africa’s Kafkaesque situation as most of us understood it: there might be an ending to the story of apartheid, but there wouldn’t be a happy ending. The option of a simply successful negotiated path to peaceful coexistence was rarely mentioned; the idea would have come across as a naive and foolish dream.

Today, we still hear that there can never be peace between, say, Israel and Palestine, or between the United States of America and Iran. Between 1989 and 1994 (the year that Nelson Mandela was elected President, replacing F. W. de Klerk to the world’s joyful near-disbelief), two men proved the pessimists wrong.

Of course, South Africa did not become a perfect nation after apartheid ended. Of course, F. W. de Klerk was a highly flawed politician, and Nelson Mandela must have been flawed in a few ways too (though I must admit that I can’t think of any). Just today, I saw a blog post arguing that it was ridiculous to claim that Nelson Mandela was a pacifist. Maybe this is true. Likewise, for all I know, F. W. de Klerk may in his private soul have been as vile a racist as the preceding white Presidents of his racist nation (indeed, how do you allow yourself to become President of a racist nation through a whites-only election if you are not a racist?).

To all this I say: who cares? Both men were imperfect, and both men exceeded themselves to solve an utterly bleak dilemma.

Mandela and de Klerk appeared to like each other, though their relationship remained complex. They won a Nobel Peace Prize together, and were photographed repeatedly shaking hands or smiling at each other, so many times that they both must have gotten sick of it. But the world needs an endless supply of photographs of Nelson Mandela and Frederik Willem de Klerk shaking hands. These photographs can remind us that anybody who ever declares that peace is not possible — in any part of the world, no matter how troubled — doesn’t know what they’re talking about.